Audio Technica’s latest headphones, the ATH-DSR9BT, are keen to turn that analogue world upside down

Thanks to the wireless trickery of aptX HD and Audio Technica’s all-new Pure Digital Drive system, this is a pair of headphones that don’t need cables to sound stupendous.

These are Audio Technica’s money-no-object wireless headphones, but the focus here is single-minded. Sound quality has been put above everything else. There’s no active noise-cancelling and no 3.5mm cable option, although you can listen to 24-bit 96kHz audio from a laptop via the supplied USB cable. You don’t even get a pound’s change from £500.

The Audio Technica ATH-DSR9BT are, however, the first headphones I’ve encountered that transform the digital stream of 1s and 0s directly into sound. Where rival headphones use an inbuilt DAC (Digital to Analogue Convertor) to convert the bitstream into an analogue waveform and then feed that to an amplifier which powers the drivers in each earpiece, the ATH-DSR9BT’s use Trigence Semiconductor’s Dnote chipset to directly control its pair of large 45mm drivers.

Does this make a difference? Well, theoretically, yes. As this avoids degrading the digital audio signal by introducing unnecessary distortion or unwanted side effects the claim is that you’ll hear more detail than ever before. 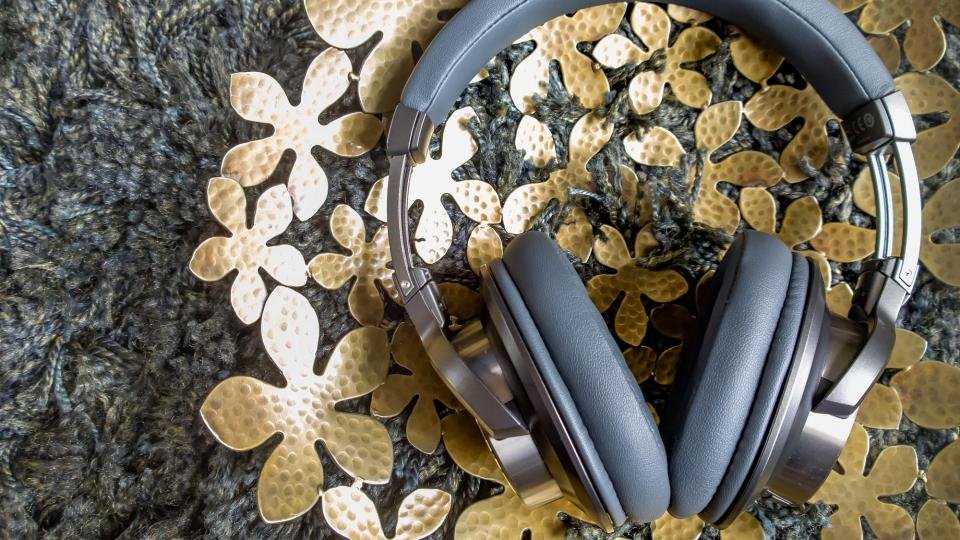 They might share similar styling to Audio Technica’s other closed-back, over-ear headphones but it’s immediately obvious that the ATH-DSR9BT are a breed apart. Gone are the studio-friendly black plastics and sombre dark metals of their less expensive peers. Instead, the ATH-DSR9BT are covered top to toe with varying shades of metal and grey leather.

Put them on and, while they’re not so comfortable you can completely forget you’re wearing them, they come pretty close. The combination of memory foam earpieces and just the right amount of clamping force mean they stay firmly in place without pressing too hard on the sides of your head. 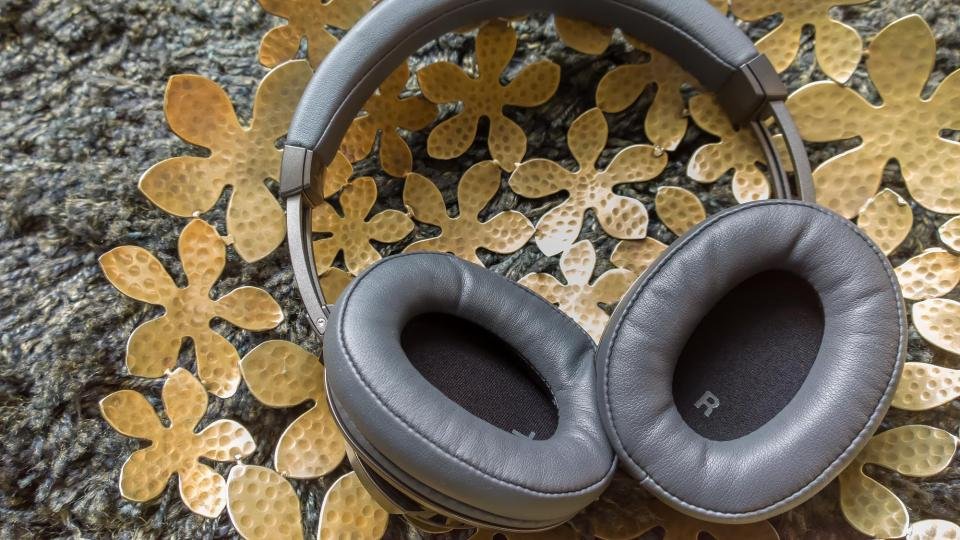 The headband does make its presence felt after a few hours and the earcups can become a little sweaty in warmer conditions but that can be fixed by adjusting the earcups or shuffling the ATH-DSR9BT slightly back and forth. One thing is certain, though: they’re an order of magnitude more comfortable than the B&W PX which have been my go-to wireless headphones for the past two months.

If I’m being super-critical – and I’m inclined to be considering the price of £499 – build quality doesn’t feel quite as solid and refined as I’d expect at the price. My pair also had squeaky hinges and, while this wasn’t a regular annoyance, it did feel to need to occasionally adjust the earcups while walking around town.

Pairing and operation is straightforward. Look under the left earcup and you’ll find the volume control, a single touch-sensitive button and a micro-USB input hidden under a plastic flap. To pair the ATH-DSR9BT, simply flick the power switch on the right earcup and they automatically pop up on any Bluetooth-enabled device. There’s no dedicated pairing button.

The three LEDs on the left earcup flash or light up in different colours to signify that pairing is in process, to indicate battery level (you’ll get up to 15 hours from a full charge), or to show which type of audio format is being transmitted from your device to the headphones, whether that be aptX HD, aptX, AAC or SBC. 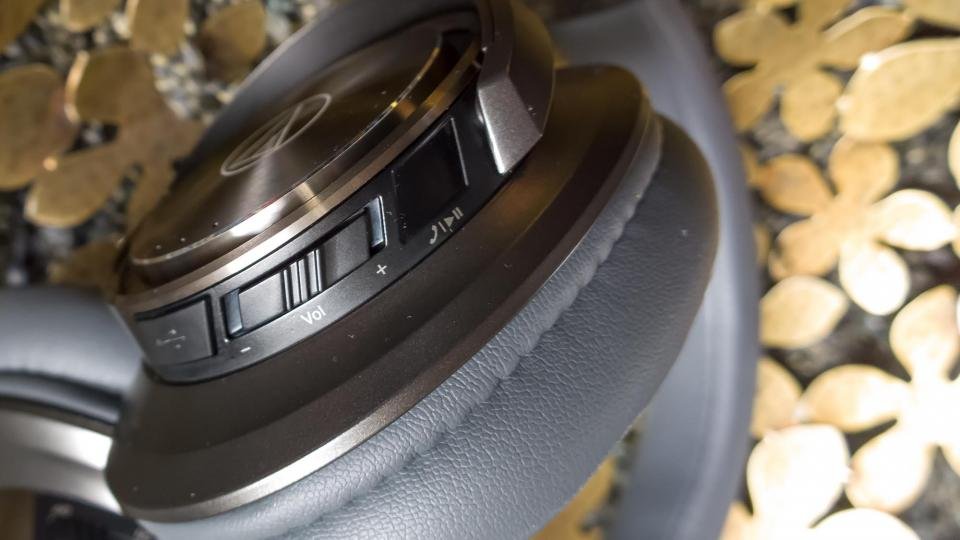 Should you want to use them as wired headphones, it’s equally simple. Simply plug in the supplied USB cable and they pop up as a USB audio device. Bear in mind, though, that you’ll need to skip tracks on the laptop itself; only the ATH-DSR9BT’s volume controls function in USB mode.

If there’s reason to pick fault with the ATH-DSR9BT’s design, then that touch-sensitive button is by far the worst offender. Reach up to change the volume and there’s every chance you’ll brush that button and inadvertently pause the music. Dab the button again and the delay in the music restarting might lead you to press it a second time, causing the music to play for a second and then instantly pause again. Until you get used to carefully feeling around the ear cup for the volume control this is a pain. I’d definitely have preferred a physical button.

From the first note, it’s clear the Audio Technica ATH-DSR9BT are something very special indeed. You can argue that the very best audio equipment vanishes and puts the music centre stage, and the ATH-DSR9BT do that from the off. It doesn’t matter whether it’s the most brutish punk or delicate classical, the music flows effortlessly.

And where some of Audio Technica’s headphones have tended towards a lean, detailed presentation, one that can prove tiring and harsh with more aggressive tracks, the ATH-DSR9BT are entirely more satisfying.

They put in a hugely balanced performance. The bass isn’t overbearing but reaches down so low and so confidently it’s as if there’s a huge subwoofer deftly underpinning everything and the upper registers are similarly refined. Every single strand of the music is perfectly untangled: vocals hang in the air while instruments, samples and synthesizers spread left to right and front to back, each floating freely in space. For closed-back headphones the sense of space and the sheer width of the soundstage is startling. 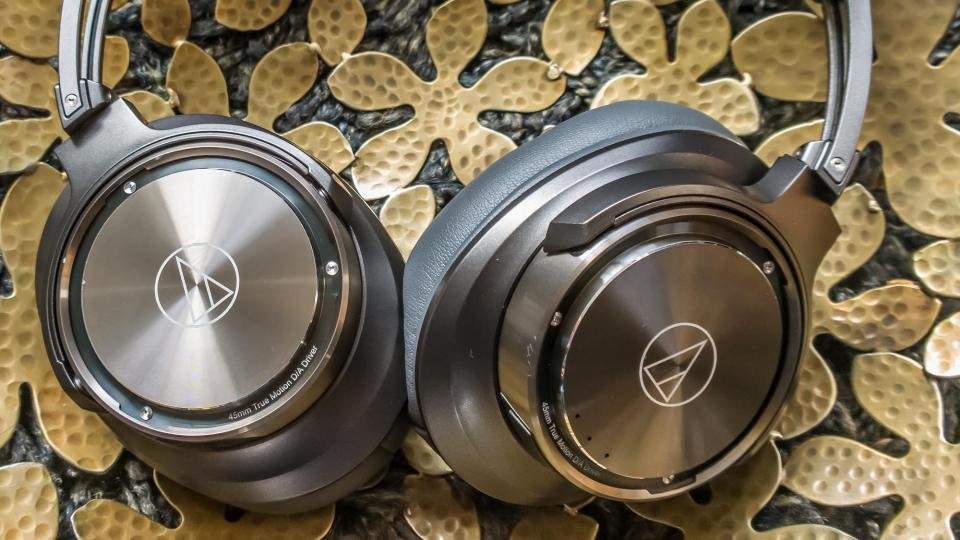 During the weeks I’ve so far spent with them the ATH-DSR9BT have unearthed hidden details in tracks I’ve heard a thousand times before. Brian Eno’s Apollo – Soundscapes & Atmospheres was a revelation: quiet bubbling synths and atmospheric washes that were borderline inaudible on other headphones suddenly became distinct and easy to pick out.

Bjork’s recent album, Utopia, told a similar tale. The ATH-DSR9BT laid bare every layer of vocals, field samples, synths and shuddering percussion. I’d been left somewhat cold by certain tracks on previous listens, but the ATH-DSR9BT’s ability to reach inside Arca’s dense, multi-layered productions, untethered Bjork’s vocals in a way that allowed them to become more heartfelt and emotional.

The ATH-DSR9BT performed similar feats with Metz’s noise rock album, Strange Peace. With Steve Albini on production duties for the band’s second album, this is a record that finally captures the sheer, distorted brutality of Metz playing live. It’s also a living nightmare for lesser headphones where the layers upon layers of distortion, grinding fuzz guitar and vocals often blur into an incoherent mess. Not so with the ATH-DSR9BT. This is definitively the best I’ve heard this album sound. There’s enough clarity to cut through the distortion, and enough bass grunt and midrange impact to make it sound precisely as vicious as intended. It’s hugely impressive.

If you’re expecting me to say that the ATH-DSR9BT are, for all their wireless brilliance, at their absolute best with their USB cable attached – then you’re right. But, if you’re expecting a huge gulf in sound quality between wired, AAC, AptX and AptX HD modes, then you’ll be pleasantly surprised.

The ATH-DSR9BT sound universally fantastic regardless of the source. There are differences. The wired connection has the edge for clarity, with bass extending deeper and more forcefully than via wireless, but it’s not upsettingly different.

I spent a good deal of time listening to a range of music sources, including Tidal, Spotify, and a variety of lossless and hi-def downloads and across a range of devices, from a MacBook Pro (AptX), iPhone SE (AAC) and an LG G6 (Aptx and Aptx HD) – but I never felt shortchanged by the sound quality from any of them.

The only time I did notice any sound quality issues was when my MacBook Pro initially connected via SBC and sounded like it was using an unpleasantly low bitrate; manually forcing to AAC or AptX fixed the issue.

At this price, the Audio Technica ATH-DSR9BT are not an impulse purchase. What’s more, they have little in the way of direct competition. They cost a considerable premium over and above the best wireless headphones on the market, many of which have active noise cancellation. Some of our favourite wireless and ANC-equipped headphones, such as the £329 Bose QuietComfort II and £319 B&W PX, seem affordable in comparison.

In fact, they’re closer in price to wired competitors such as B&W’s astonishingly good £699 P9 Signature, or the £399 Sennheiser HD 660 S (which I currently also have in for review), but both of those require a separate headphone amplifier to sound their best, which will cost you at least another £100. Given the ATH-DSR9BT arguably sound as good as either you certainly couldn’t accuse them of being overpriced.

The Audio Technica ATH-DSR9BT will not be everyone’s cup of tea. If you’re a frequent flyer, or regularly battle through the din of road noise, bus chatter and clanging tube trains, then look elsewhere.

Once background noise rises to anti-social levels, the ATH-DSR9BT are soon overwhelmed. You’ll end up having to crank them right up to stop them from being drowned out, which is less than ideal for sound quality and your hearing.

But while I’d always reach for a pair of ANC headphones while travelling, it’s testament to the ATH-DSR9BT’s audio quality that all my other headphones – both wired and wireless – have remained on a shelf ever since they arrived. Even if you’re spending serious money, the ATH-DSR9BT are good enough to make quite a few wired headphones sound very pedestrian indeed.

If like me, you’ve always assumed that wireless convenience and uncompromising sound quality were mutually exclusive, then Audio Technica’s ATH-DSR9BT ably prove a point. And the point is that we were both wrong.