The ATH-M50x and its predecessor, the ATH-M50 are arguably the most iconic headphones Japanese audio-equipment manufacturer Audio-Technica has ever made.

Sold as professional, studio monitoring headphones, they’ve become such a hit with consumers that more than 1.8 million pairs have been sold worldwide.

There’s only one problem: they’re wired. That’s not a bad thing per se, especially in a professional context but a cord is enough to put off many prospective customers choosing them as their everyday cans for use around the house or on the commute, irrespective of their practical foldable design and carrying case.

So what’s the solution? Say hello to the Audio-Technica ATH-M50xBT, which are every bit as good as the ATH-M50x, but without the cord. 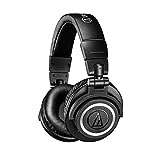 At first glance, the ATH M50xBT look so similar to their wired counterpart they’re almost impossible to differentiate. They have the same large black ear cups emblazoned with the Audio-Technica logo and the company’s name sits proudly atop an identical chunky, faux-leather headband.

Look closer under the left earcup, though, and you’ll spot the first clues they’re different. Specifically, you’ll find three buttons, the power switch and a micro-USB port for charging. Last but not least, there’s a 3.5mm port to which you can attach a cable, complete with in-line remote, which is included in the box. 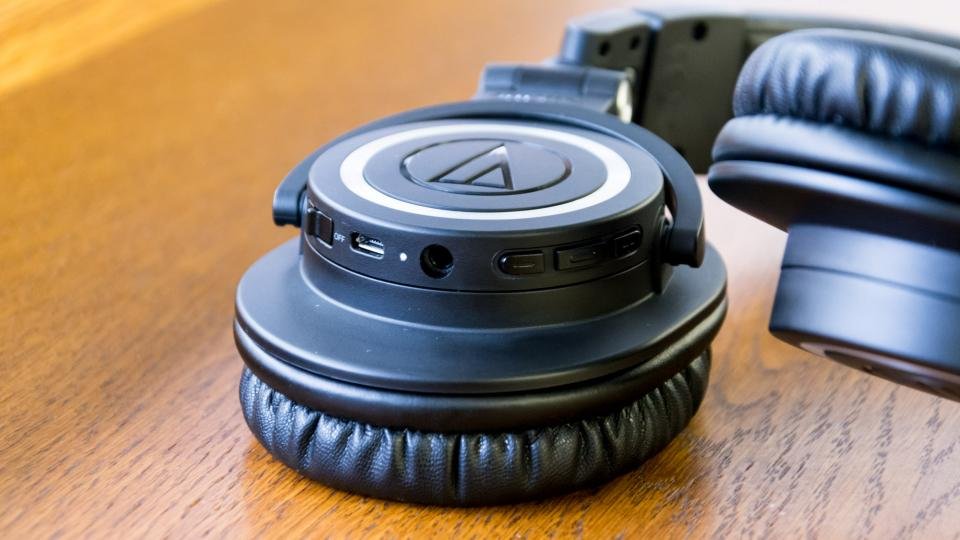 Otherwise, the ATH M50xBT are more or less the same headphones as their enormously popular predecessors. Like their corded counterparts, the earcups swivel by 90 degrees in both directions and you can collapse the ear cups upwards to pack the headphones away in the soft pouch that’s also provided.

The large padded ear cups ensure great comfort as well as excellent passive sound isolation, but Audio-Technica has decided against adding active noise cancelling (ANC). That’s a shame if you want to cut out every last bit of outside racket. The upside is that the ATH M50xBT has superb 40-hour battery life. This is a pair of headphones that should last even the longest long-haul flight.

So how do they sound? Behind the ear cups, the ATH M50xBT have the same size 45mm drivers as the ATH M50x and Audio-Technica has done an excellent job of ensuring they offer the same sparkling detail as their corded counterparts. Indeed, after connecting the headphones to my OnePlus 5T with aptX codec (the ATH M50xBT also support SBC and AAC), it was difficult to differentiate the ATH M50xBT from the wired model at first. 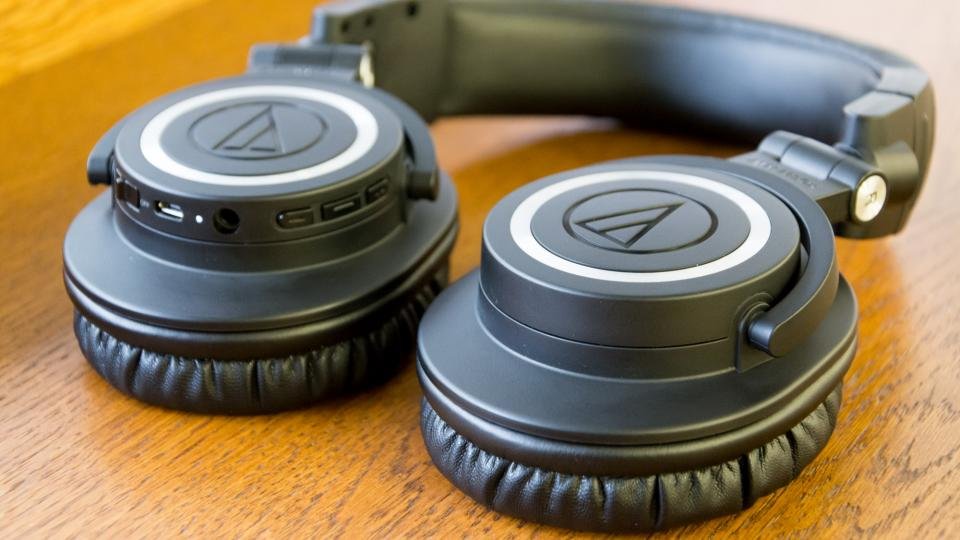 There are subtle differences, though, and of these, the main one is that the ATH M50xBT lack some of the sibilance and harshness in the upper frequencies of their wired counterpart. They still have a boosted low-end, which can occasionally sound a little muddy, but they’re more neutral than the wired model thanks to the flatter treble response.

Being closed back headphones, it comes as no surprise that the M50xBT don’t have the widest of soundstages but the headphones deliver excellent instrument separation and there’s more of a sense of space than you might expect. In short, the ATH M50xBT are a joy to listen to and, to my ears, offer a more enjoyable listening experience than the regular ATH-M50x.

In terms of smart features, the ATH-M50xBT let you summon either Google Assistant or Siri with a long-press of the left ear cup and there’s also a microphone so you can interact with the virtual assistants as well as making and receiving calls. The headphones also work with the Audio-Technica Connect mobile app, which lets you switch Bluetooth codecs and check the device’s remaining battery life.

Audio-Technica’s new ATH-M50xBT are a resounding success. They have all the strengths of the wired ATH-M50x, including excellent sound quality, superb comfort and isolation and a practical, durable design. Crucially, though, the ATH M50xBT has another key party trick in its locker: wireless connectivity.

If you love the way the ATH M50x sound but want the convenience of being untethered from your laptop or phone these are the headphones for you. Heck, I think they even sound better than the originals.

More in this category: « Audio Technica ATH-DSR9BT Headphones Review: Wireless and worth it Audio-Technica ATH-S200BT UK Review: Solid and affordable »
back to top