The Acer Nitro XV273K gaming monitor was announced last year. It got gamers excited, as it cost half of the company’s flagship 4K 144Hz HDR monitor, the Acer Predator X27.

Fast-forward to early 2019, Nvidia announced twelve FreeSync monitors that passed G-Sync certification, one of them being the XV273K. These new monitors allowed either FreeSync with an AMD graphics card or G-Sync with a compatible Nvidia GPU to work on a single monitor; a feat previously deemed impossible.

The Acer Nitro XV273K is a 27in IPS gaming monitor that’s capable of achieving 4K HDR at 120Hz over a single DisplayPort cable. Plug in two DP 1.4 cables, and it’ll manage 10-bit 4K 144Hz with no chroma subsampling, but that excludes HDR, AMD FreeSync and Nvidia G-sync from the equation. But at £900 it isn’t cheap, and with no FALD (Full Array Local Dimming) it doesn’t place in the same league as the Predator X27.

The 27in display is held up by a triangular metallic stand, which provides height adjustment, tilt and swivel. There’s no means of pivoting the non-curved display, but with VESA compatibility, you can always add your own stand to the mix. 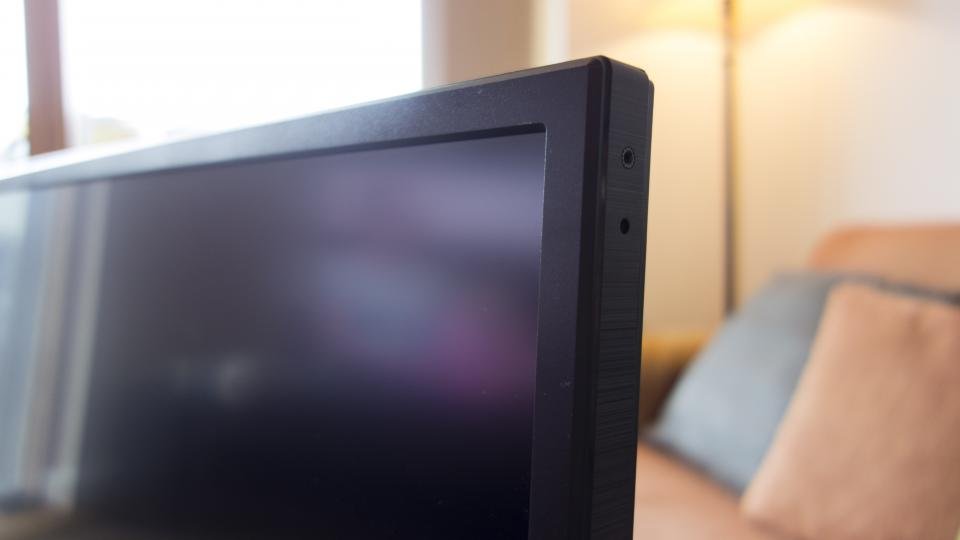 Design wise, the monitor has four chunky bezels, three removable shading hoods, and a customisable RGB strip that sits under the display. Unlike the Predator X27, the XV273K doesn’t have a fan – it’s quiet.

To access the OSD there’s a joystick and four buttons that reside around the back of the monitor. But while the OSD menus are laid out chronologically, they can be sluggish to access. There’s an inexplicable delay between button presses and on-screen actions. 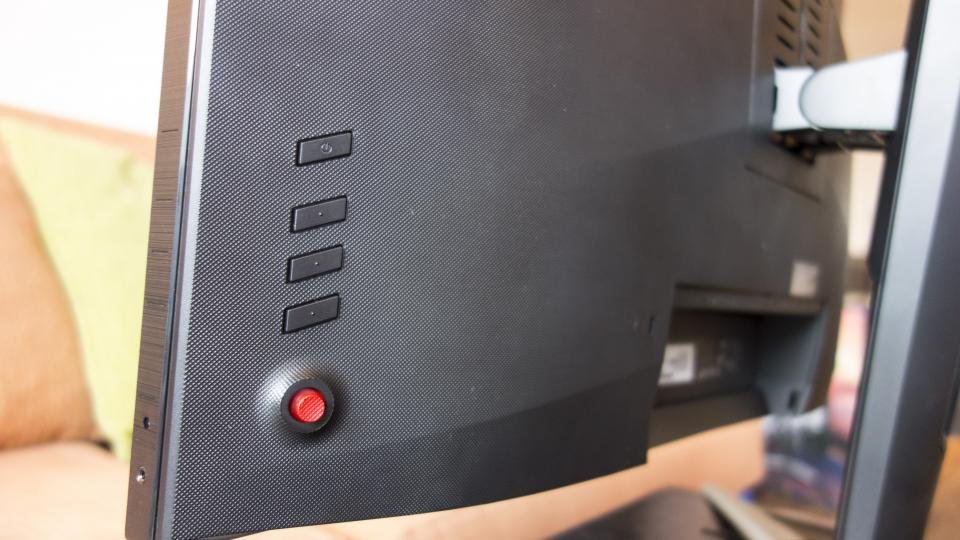 As for connectivity, there are two USB 3.0 ports sitting on the left edge, with a further two sitting underneath the monitor. You’ll find a 3.5mm headphone jack here, too. The two built-in 4W speakers are sufficiently adequate for Windows notifications, but you’ll want headphones or external speakers for a decent gaming experience.

The monitor features two HDMI 2.0 ports that are capable of 4K HDR at 60Hz, and two DisplayPort 1.4 inputs that are each able to display 4K HDR at 120Hz. If your desire is to run 10-bit 4K at 144Hz, two DP 1.4 cables are required to be connected to the graphics card. The downside? Use this combination and HDR, AMD FreeSync and Nvidia G-Sync compatibility are all sacrificed. 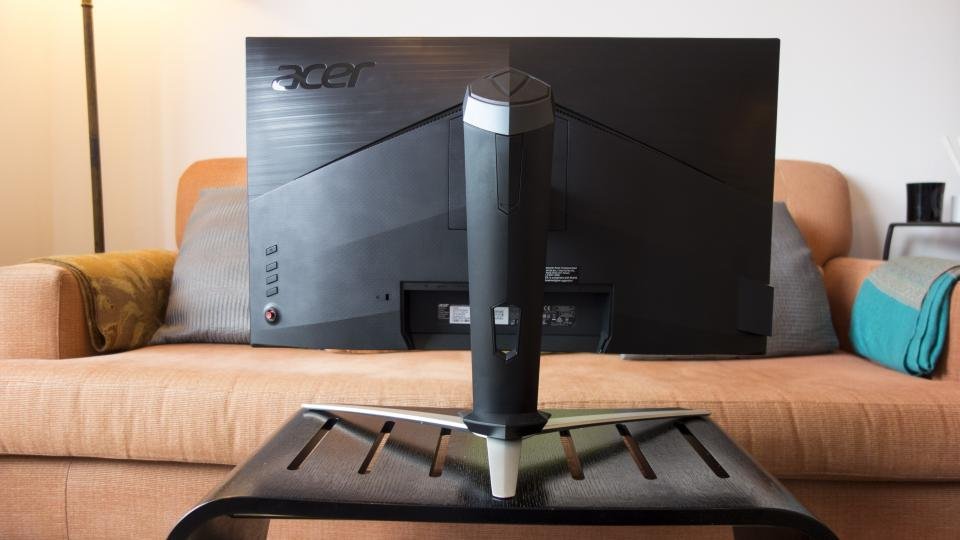 Put through the i1 DisplayPro calibrator, the display achieves a peak brightness of 514cd/m2 in SDR and 563cd/m2 in HDR, which is far past the 400cd/m2 claimed by the manufacturer.

Tested with sRGB mode enabled through the OSD, the panel scores a near-flawless average Delta E of 0.88, which makes it one of the most colour-accurate gaming panels I’ve seen to date. Its contrast ratio of 1056:1 and 95% coverage of the sRGB colour gamut also make the monitor pop with colour. 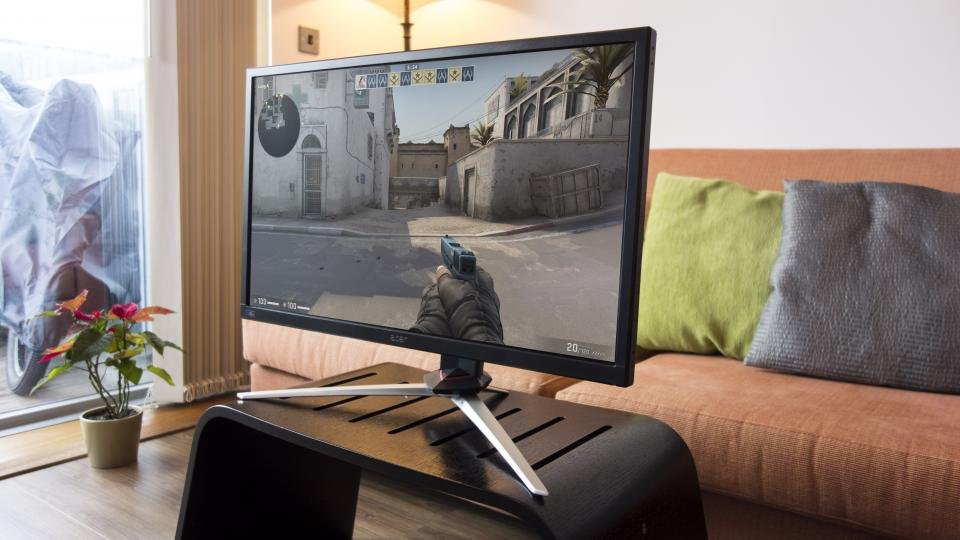 On the downside, the Nitro XV273K doesn’t feature FALD like the Predator X27. This not only impacts its HDR performance but the panel’s brightness uniformity, too; it has up to a 19.75% deviance from the monitor’s centre point.

As for colour depth, things get a little complicated: the XV273K uses an 8-bit + FRC panel to replicate 10-bit. You can achieve this through a dual DP 1.4 input that’s capable of 4K at 144Hz. Alternatively, you can ditch a cable and drop the refresh rate to 120Hz for 8-bit, which runs 4K with HDR, FreeSync and G-Sync enabled. The latter is the setting I’d recommend, as you’ll be hard-pressed to tell the difference between 8-bit + FRC (effectively, 10-bit), and 8-bit only in gaming. With these settings, you also avoid 4:2:2 chroma subsampling and maintain the full RGB 4:4:4 format.

To test the panel’s HDR performance I used a single DisplayPort 1.4 cable, ran the monitor at 120Hz 4K and enabled the HDR colour profile through the OSD.

Here, the monitor’s HDR performance is locked to the panel’s peak brightness. Where the Predator X27 has double the luminance, the Nitro XV273K looks comparatively dimmer and is far less impressive to the naked eye. That’s the result of not having FALD at your fingertips.

With the XV273K, HDR-enabled games such as Destiny 2 become troublesome in dark scenes. Trying to find the hidden tunnel in a Heroic Whisper run was seemingly impossible, while Taken Thrall enemies came at me out of nowhere. Randy Orton style. Of course, the game’s brightness slider can be put to the max, but this sacrifices colour accuracy.

It’s also possible to drop the resolution down to 1440p or below, and run the monitor at 144Hz with HDR enabled.

For HDR games such as Destiny 2, I opted for 4K 120Hz with HDR. For non-HDR, competitive games such as Counter-Strike: Global Offensive, I switched to a dual DP 1.4 setup and ran the monitor at 144Hz. It’s important to know that HDR, AMD FreeSync and Nvidia G-Sync are all disabled in the latter mode.

At 4K 144Hz, this Acer monitor sits among the fastest Ultra HD panels I’ve tested: it has a responsive panel and a perceivably low input lag, especially when compared to the Predator X27, which I’d avoid for competitive gaming. Inverse ghosting is kept to a minimum even with Overdrive set to Extreme. Its quoted 4ms response time can be further reduced to a quoted 1ms with the aid of VRB (Visual Response Boost). In VRB, there are two modes to choose from: Normal and Extreme. Both limit the panel’s overall brightness to around 200cd/m2 and 100cdm/2, respectively.

Despite its competencies, if you’re an avid FPS gamer who plays at a high level, you’ll want to stick to a 144Hz TN panel, instead. Alternatively, if contrast ratio and colour accuracy are important to you, go for the flawless input lag of the Acer XF270HUA, which has an IPS panel that runs 1440p at 144Hz.

Switch to 120Hz 4K HDR and you’ll find the combination perfect for more casual games. The panel is still responsive, and despite losing a few extra frames, the panel is buttery smooth with the help of AMD FreeSync or Nvidia G-Sync (range is 48Hz-120Hz). You’ll need a 10-series or 20-series card if you’re running G-Sync or if you’re on team red, an AMD RX 470 or above graphics card. 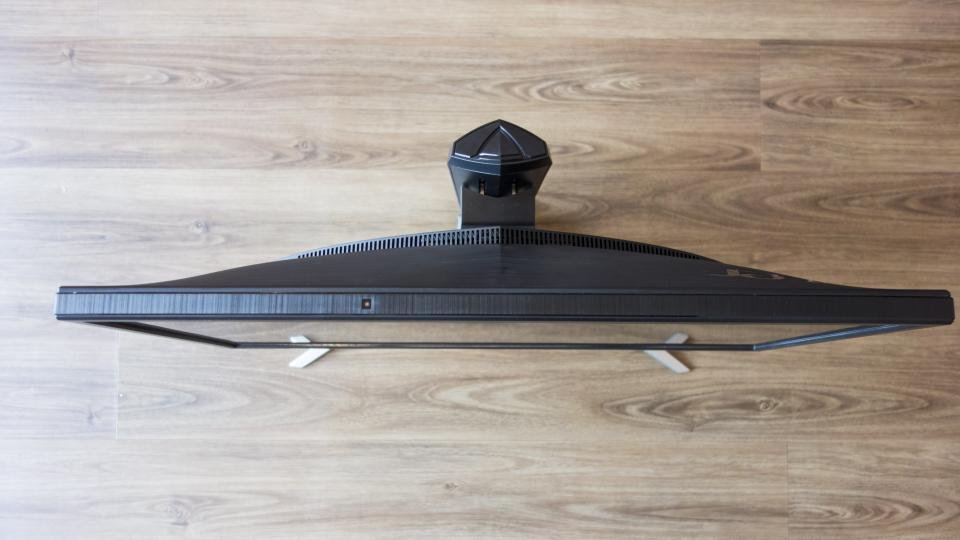 The Acer Nitro XV273K is rather special, as it’s among the first twelve screens to pass Nvidia’s G-Sync certification. No matter if you’re running an AMD or Nvidia card, you’ll be able to benefit from tear-free gaming.

To put Nvidia’s claims to the test, I used it with an Nvidia GTX 1080 and an AMD RX 590 graphics card, and with both cards the respective sync technologies ran flawlessly. To read more about the differences, click here to read my dedicated article on the subject.

The Acer Nitro XV273K might not manage to output 4K 144Hz with HDR, but it’s still an incredibly versatile monitor that deserves its own throne. There’s nothing quite like it.

It’s among the first twelve monitors to officially run both AMD FreeSync and Nvidia G-Sync, doesn’t fall under mercy of chroma subsampling when running 4K HDR at 120Hz or 4K at 144Hz, has a responsive panel, and has all the right design characteristics of a gaming monitor.

Granted it isn’t cheap at £900, but if you want a class-leading 4K panel the Acer Nitro XV273K should be your go-to display.