Since the original Echo Show launched last year the software has been refined, but the experience is broadly the same.

The Show is a voice-first Alexa speaker, with touch interactivity as an additional input rather than the core experience. If you never wanted to touch the screen beyond the initial set-up, you wouldn’t have to.

When you do go to touch it, swipes and taps work as you might expect from a modern smartphone. Swipe down from the top to reveal a quick settings shade, including a smart home control panel, a place to trigger Alexa routines and one-tap access to alarms.

You can swipe through various news, sports, reminders and calendar events, through the visual cards that accompany Alexa’s answers such as extended weather forecasts, and swipe to dismiss alarms and timers.

Even the on-screen keyboard works like a smartphone’s, although it quickly gets tiring to use it at arm’s length on the screen. Fortunately you only really need it for typing out passwords.

The screen is now much larger at 10.1in on the diagonal, 720p HD, crisper and of higher quality. The difference is night and day between the old and new Echo Show.

The design of the device looks a lot better too, shrinking the device around the screen and moving the speakers to the back of the casing. There’s still a camera above the screen for selfies and video calling, which can now connect you to Skype as well as Amazon devices and the Alexa app.

The improved screen makes it a better digital photo frame, displaying photos from your Amazon Photos library or various stock images. The size also helps with visibility from across the room, but somehow it looks more imposing than even the monolithic design of the old device.

The speakers are now mounted in the fabric back of the Echo Show.

The lump at the back contains the speakers, which like the screen are significantly improved but less direct than the front-facing speakers of the previous device.

The Show is the best-sounding smart display currently on the market, blowing away Google’s Home Hub.

The two 2in speakers and passive bass radiator produce a wider soundscape than most smart speakers and can easily fill a room, sounding best at around volume level 5 out of 10. Tracks such as the live version of Hotel California from Hell Freezes Over by the Eagles have a far richer tone, better separation and sparkle than previous Echos.

The Show deals with most genres well. Feed it a track such as Forgot About Dre and you get a punchy bassline that doesn’t bludgeon the lyrics. George Ezra’s Shotgun sounds warm and upbeat, Rita Ora’s Let You Love Me sounds sharp, while Smells Like Teen Spirit has the right amount of attack. Even classics such as String Quartet in E flat sound clean and precise.

It shows its weakness with high-energy tracks such as Daft Punk’s Derezzed, which sound somewhat flat, but Tycho’s more relaxed Jetty sounds great. It doesn’t have really deep bass (you can pair a separate £120 Echo Sub with it if you want more bass) or any real stereo separation. But the Echo Show is one of the better-sounding smart speakers available, coming somewhere in between the Echo and the brilliant Sonos One or more expensive Apple HomePod. 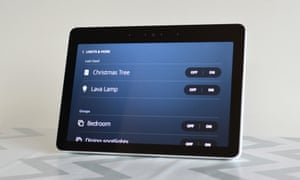 You can control smart home devices via voice, or by using the touchscreen.

The new Show has an integrated smart home hub, which means you can connect smart bulbs, switches and other devices that use the Zigbee wireless protocol straight to the Amazon device without the need for another hub.

It works well for simple things, but devices such as Philips Hue bulbs often need their dedicated proprietary hub to perform advanced features and updates.

Otherwise the smart display operates like any other Alexa device, connecting to smart home hubs and devices via your home wifi network or the internet. The sheer number of devices that support Alexa integration is bewildering, which means whatever you want to turn smart in your home probably can be and therefore controlled via voice or taps on the screen. Smart cameras and doorbells, including that from Amazon’s Ring and Google’s Nest, work particularly well, showing the live feed from your front door or elsewhere on command.

But voice control is only one part of the equation. You can control devices from the Show’s screen with a couple of taps and swipes, and through the Alexa app on your smartphone, which has improved considerably in the last couple of iterations.

Lastly, Alexa now has “routines” that can perform a collection of different actions with one phrase or tap on the screen, such as saying “goodnight” triggering off all the lights in the home to turn off.

Various video services work on the Echo Show, but most require using a browser on the screen, which is a bit clunky.

TV shows and movies from Amazon’s Prime Video service work well on the 10.1in screen, with a relatively easy to use interface that can help you find the right show via taps or voice. Once playing you can control playback via voice, which is handy when things get hectic in the kitchen or similar.

Other video services are a bit more complicated requiring a trip into the included Amazon Silk or Mozilla Firefox browser, which work like they do on an Android tablet.

Ask for a particular video from YouTube, for instance, and you end up with some tangentially connected video from Vimeo, which is apparently the top result from Bing for your search terms. But ask for just YouTube and you can manually navigate to the video you want using what appears to its mobile site in the browser.

Once playing a video it looks good in full screen, but voice control is limited to volume. It’s not a tremendous experience for a voice assistant-powered display, but at least it works. The same goes for Dailymotion, Vimeo and the BBC iPlayer, but ask for Netflix and Alexa shows you Prime Video. Manually browse to Netflix in Firefox and it asks you to “rotate your phone to portrait to continue”, blocking your way. Try the same in Amazon’s Silk browser and you can log into Netflix but can’t play any videos, with the site demanding you download the Netflix app from Google Play to play videos.

A similar thing happens for ITV Hub, All4 and other UK catch-up TV. There are skills available, such as Stream Player, which promise to stream live TV, but the choice of channels beyond Sky News is thin on the ground. 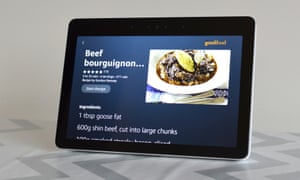 Recipes on the Echo Show are great, with full voice or touch control.

Aside from multiple named timers, the Show can also guide you through recipes, either via voice or taps on the screen. Ask Alexa for a recipe and you’re given a choice from BBC Good Food and other sources.

Select one via voice or a tap and it’ll read through it step by step, with progression either via voice or taps. The ingredients list is also always just a voice command or tap away, and Alexa can tell you precisely how much to put in of each thing in each step or repeat the instructions at any one time. 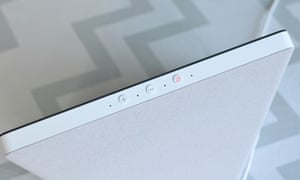 The volume and mic-mute button are on the top of the Echo Show. When the mics are muted the button glows red.

The Amazon Echo Show costs £220 and is available in black or white.

The new Echo Show is easily one of the best smart displays available, and is an upgrade in almost every way over the old one, but at £220 it’s also pretty expensive.

At its core the Show is just an Alexa-powered smart speaker, and so most of its functions can be had for as little as £50. But that big, crisp 10.1in screen makes for a good digital photo frame, excellent kitchen helper and a solid smart home controller, particularly if you have any compatible smart cameras or doorbells you want to view without digging out your phone.

It sounds really good too, and the built-in Zigbee smart home hub is a nice value-add. But you need an Amazon Prime subscription to get the most out of its video capabilities, and it’s harder to blend in with home furnishings than some rivals.

If you’re already on board with Alexa and want a great big smart display, the new Echo Show is it. But it’s no longer in a field of its own, and Google’s excellent Home Hub is significantly cheaper at £139.