If you love the idea of great coffee at the touch of a button, then chances are you’re already familiar with Nestle’s Nespresso capsules.

Now, Sage – a brand perhaps better known for its family of superb manual espresso machines – has delivered its take on a Nespresso machine with a unique twist: the Creatista Uno.

Essentially, the Creatista Uno is a machine that’s best suited for people who want lattes and cappuccinos with minimal effort – and a minimum of mess – but who also demand perfectly frothed milk.

If the thought of grinding, tamping, twisting, tapping, and frothing manually is just too much hassle every morning, but you’d still like the kind of perfect microfoam that makes for picture perfect latte art, then could be the machine for you.

There is an abundance of pod coffee machines on the market, but most focus on creating a quick, tasty espresso. What the Nespresso Creatista Uno brings to the party is a proper steaming wand – like the ones you see on manual espresso machines. This froths milk at the touch of a button, and with no twiddling of knobs for steam or guesswork as to how submerged the wand should be. It also cleans itself too.

It couldn’t be easier to use. Place the supplied stainless-steel milk jug on the drip tray with the wand in place, fill it with milk, select how hot and frothy you’d like the milk to be from the buttons on the top. The Creatista Uno does the rest. Once done, you can pour as much or as little as you want, and the perfect microfoam means that you’re free to make cappuccinos and lattes as you prefer them, or try your hand at creating latte art. While this functionality takes its lead from the original Creatista machine, a simple selection of buttons makes it easier to use.

Of course, this being a Nespresso machine, it also makes ristrettos, espressos and Americanos using its consistently faultless Grand Cru capsule system. 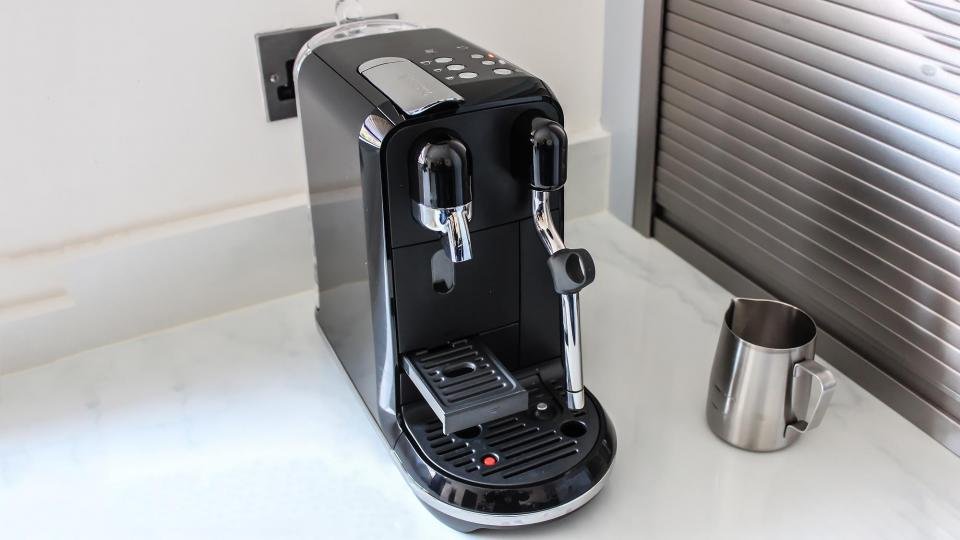 The Creatista Uno manages to be both compact and convenient. The former may not initially be so surprising – most capsule machines tend to be smaller than bean-to-cup models – but despite its size it manages to avoid the design pitfalls that dog some machines.

For example, the cup platform isn’t constrained, so you can use your largest mug without having to jam it in at an angle. If you do want to use smaller espresso cups, then a hidden elevated platform pops out from the front panel – a far more elegant solution than relying on an upturned drip tray like some machines.

There are other thoughtful design touches. The generous 1.5-litre water tank lifts out by way of a ring-style handle, and a removable lid means you can fill it in-situ – great for mid-brew top-ups. The drip tray isn’t joined to the capsule bin, and has a spout, so emptying it is splash free. Better still, Sage hasn’t opted for a chrome-finish for the drip grid, so it won’t pick up unsightly scratches as the months roll by.

Additionally, the machine is slim enough to turn 90 degrees and store at the back of a worktop when not in use. There’s even a cleaning guide printed on the tank for those of us prone to mislaying the instructions.

For many people, the Creatista Uno’s sheer convenience will be the most pleasing thing about it. It heats up in three seconds, so there’s no waiting around, and the control panel on top is beautifully simple.

Lift the chrome lever on the top of the machine and capsules drop in, locking into place as you pull the lever back down. Once the coffee is brewed they automatically drop into a push-to-open bin.

There’s one button each for lungo, espresso and ristretto, each of which can be tweaked to deliver just the right amount of coffee. Alongside, there are two buttons for selecting milk temperature and froth. The supplied jug then sits on a sensor in the tray, and a single press of the froth button fires up the steam wand which automatically heats the milk to the right temperature.

If you’re a big fan of frothy hot chocolate and babyccinos, then you’ll be glad to hear that you don’t have to brew coffee to use the milk frother. In fact, the only thing you need to do is wipe the wand once you’ve removed it from the jug. It then automatically cleans itself, ejecting leftover milk and steam into the drip tray. It does splash a little over the kitchen surface, but not too much.

The machine automatically puts itself into standby after 10 minutes (it’s woken up by pressing any of the buttons on top), but you can opt to shut it off manually by pressing the steam and ristretto buttons together.

There are some minor annoyances. There’s no empty tank indicator – instead the coffee button lights go out, which initially left us puzzling as to what might be wrong. It’s also quite noisy when brewing, which is surprising for a pod machine. 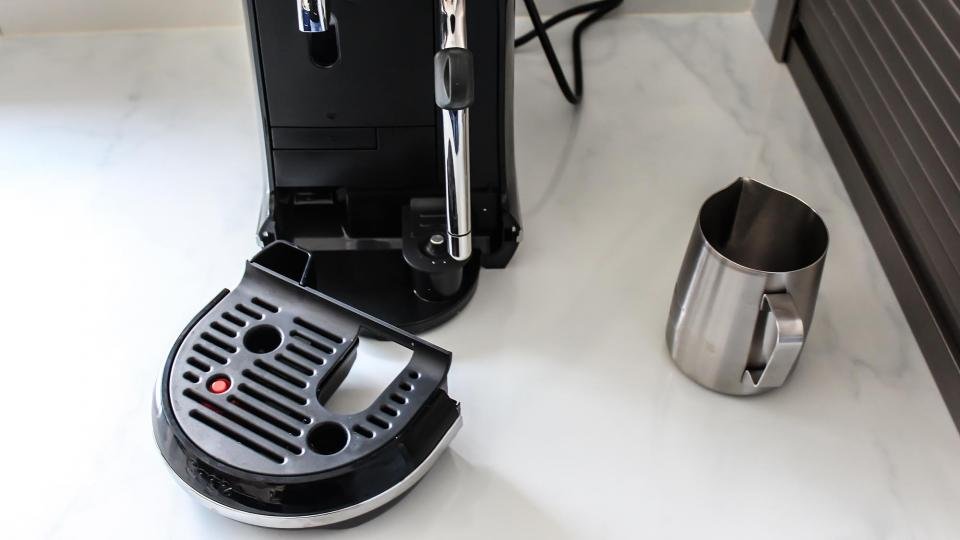 When almost every other aspect of the Creatista Uno exhibits such design finesse, it is mildly irksome that you can’t just fling its various component parts into the dishwasher. Sadly, the only part that can go in is the jug, which leaves you to manually rinse the used capsule bin, grid and drip tray. As daily coffee machine maintenance goes, it’s by no means onerous – but it’s not the zero maintenance machine you might have wished for.

On the plus side, cleaning is minimal in every other way – an alert LED lets you know when to descale it, plus there are those aforementioned instructions on the water tank. There’s also a handy ‘full’ indicator on the drip tray, so you can empty it before it becomes a challenge to carry it to the sink.

As you’d imagine, though, milk frothing does necessitate the occasional deep clean: to this end, the Creatista Uno has a steam wand clean alert LED. To clean the wand, you’ll need to retrieve a pin from underneath the water tank, dismantle the wand and use it to clear any blockages before rinsing and a quick steam purge.

The Creatista Uno adds a layer of control which is missing from rival machines with built-in milk carafes, or those equipped with more basic milk frothers. By using a traditional steam wand, it produces the kind of perfectly frothed milk and silky microfoam which makes for consistently brilliant lattes, cappuccinos and flat whites.

If you’re looking for a capsule coffee machine that’s easy to use, low maintenance, and makes great coffee without the hassle of manual machines, the Creatista Uno is one of the best.

More in this category: Dyson V7 Animal UK Review: Top cleaning for under £300 »
back to top