The Q Series is aimed at simplifying the buying process for Samsung devotees, providing a mirrored naming scheme that makes it simple to match the right bar to your shiny new TV.

Of course, you can pair it with whatever TV you want, but the HW-Q70R I have on review here is designed as the perfect match for Samsung’s £1,499, 49in Q70R QLED TV.

Samsung sells this as one of the more “affordable” soundbars in its new range and, while it isn’t exactly what you’d call cheap, it is the lowest-priced bars Samsung sells that supports both Dolby Atmos and DTS:X. 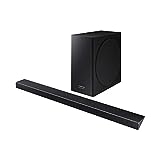 To bring movies to life, the HW-Q70R’s has two upward- and five forward-firing drivers along the bar, plus a wireless 8in subwoofer to pound out the low frequencies. Its 3.1.2 channel configuration is backed by 330W of total amplification with the subwoofer.

It might seem expensive but the HW-Q70R supports Dolby Atmos and DTS:X. These technologies add an extra layer of immersion, mostly in the form of audio “height”.

The HWQ70R isn’t like traditional systems that use ceiling-mounted speakers to deliver sound from above. Instead, it bounces sound waves off your ceiling using a pair of upwards-firing drivers.

Alongside those, the HW-Q70R has another five drivers at the front. There are, however, no sideways-firing drivers as found on the HW-N850, nor any rear-facing drivers like those on last year’s flagship, the HW-N950. To recreate that feeling of width, the drivers on top of the bar are angled diagonally outwards rather than pointing straight up.

As with its older models, Samsung includes a wireless subwoofer with the HWQ70R. This year, however, the source for low-end frequencies has had a facelift – it looks different and sounds it, too. More on that below. 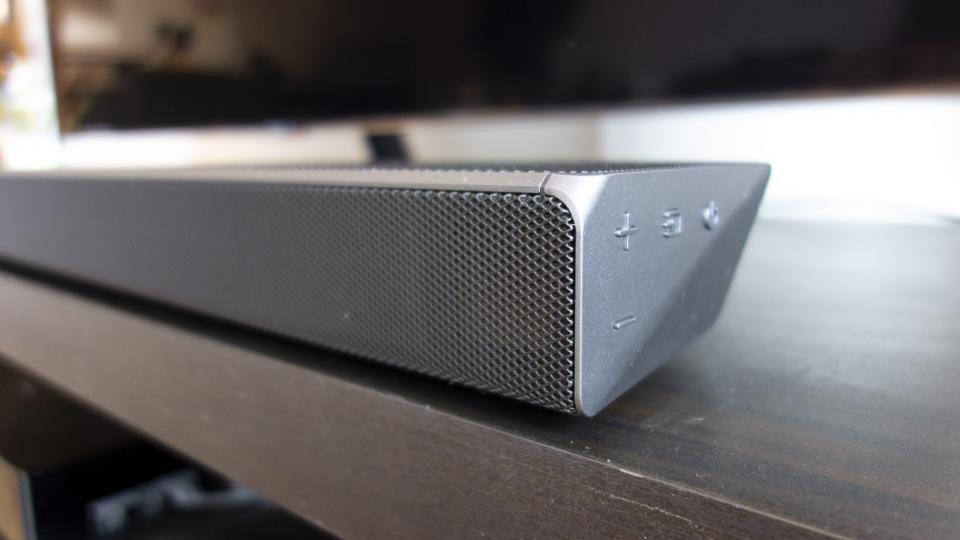 Design-wise, the soundbar part of the set is identical to the HW-N650. It has an all-metal speaker grille around the main bar, which measures 110 x 100 x 59mm (WDH). The four physical buttons on the right edge are exactly the same as the HW-N650, as is the LCD display that sits behind the grille and shows volume levels, which mode you’re in and so on. 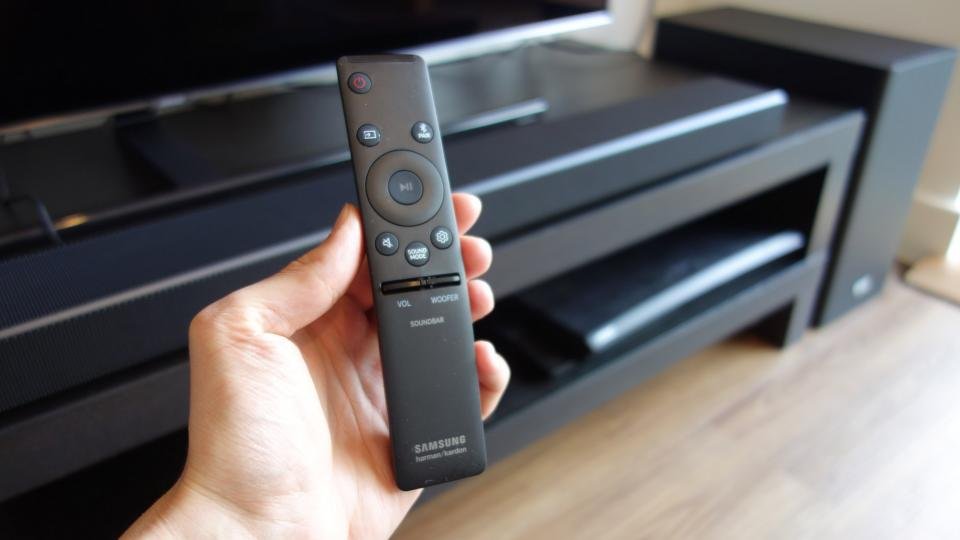 This year, Samsung has included four separate sound profiles: standard, surround, game and Adaptive Sound. The latter is new and dynamically adjusts the EQ profile to match the content you’re watching, in a similar fashion to the Smart Sound tech Samsung used in its 2018 soundbars. The difference is that it also tweaks the EQ based on acoustic room measurements, which are made via the microphone in the soundbar’s remote control.

As for connectivity, the HW-Q70R has HDMI and optical inputs, plus one ARC-enabled HDMI output, which supports HDR and 4K video passthrough. It has both 5GHz and 2.4GHz Wi-Fi support, too, which allows initial setup through the Samsung SmartThings app. It also has Bluetooth, but this remains limited to the lower-tier SBC codec. I’m still longing to see aptX, aptX HD and LDAC support on a Samsung soundbar.

With the lack of aptX, I’d recommend connecting to the soundbar via Wi-Fi instead of Bluetooth or a wired connection for the best possible quality.

To start off my tests, I tuned into some terrestrial TV to see if the soundbar would correctly upmix regular stereo content. In Adaptive and Surround modes, it does a decent job. It’s not as effective as the HW-N850 at creating an effective surround effect, as it doesn’t have sideways-firing speakers, but it’s far better than most basic soundbars I’ve listened to. The centre channel keeps dialogue front and centre, too. 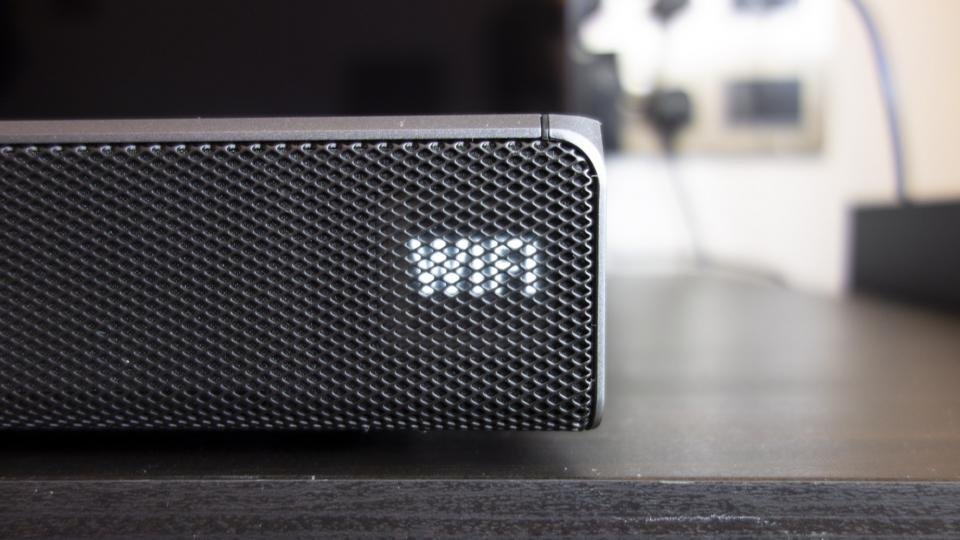 Switching to a 4K Blu-ray player with Transformers: Age of Extinction, I was immediately impressed by the Dolby Atmos effect. Gunfights came to life and sound effects were clearly positioned in 3D space. It doesn’t quite match up to the exhilarating feeling of being wrapped with sound I had with the HW-N850 but it is, nonetheless, impressive. With Dolby Atmos in full effect, though, it’s a completely different proposition to the cheaper HW-N650.

Musicality is another a key factor for soundbars; after all, many people don’t want two speaker systems in the living room. Here, the HW-Q70R delivers similar performance to the HW-N650, with a warm overall presentation where the mids are recessed and the highs are more prominent. 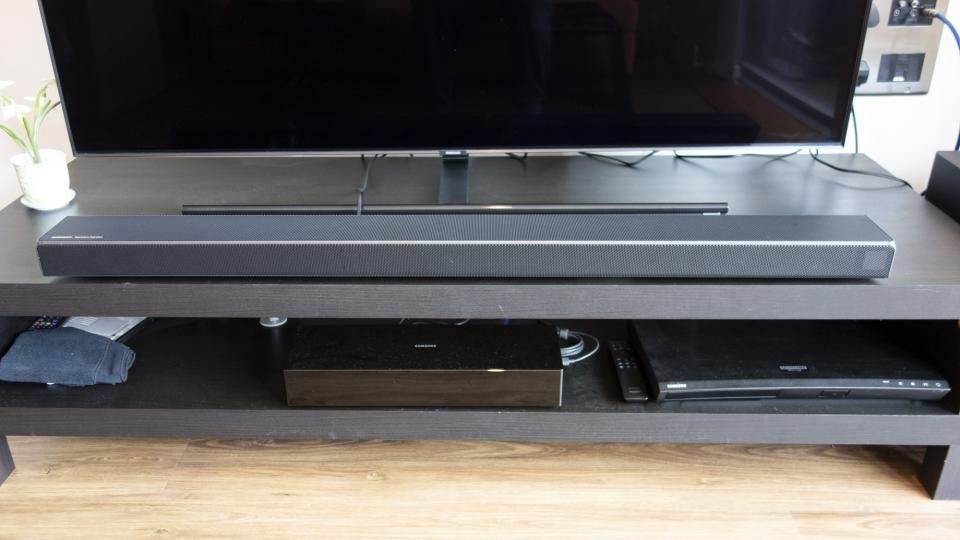 The only element that has been changed over the HW-N650 is the subwoofer and, here, Samsung’s back-to-the-drawing-board approach has paid off. The new subwoofer extends as far down as 35Hz, which is lower than its sibling’s 42Hz bottom end and this allows the subwoofer to deliver a deeper, more pronounced rumble in the sub-bass region. The mid-bass control is also excellent.

In summary, the Samsung HW-Q70R is a great soundbar, but it’s stuck in a difficult position.

On the one hand, it’s more capable than the HW-N650, offers Dolby Atmos and DTS:X support and has a more competent subwoofer. On the other, it’s only £100 cheaper than the HW-N850, which delivers far superior audio reproduction across the board.

When it comes down to it, the Samsung HW-N850 is still the soundbar I’d recommend for those seeking a good-quality Atmos soundbar for relatively reasonable money. The HW-Q70R is good, but not quite good enough.

More in this category: « Denon HEOS Bar UK Review: Impressive but pricey Bose Soundbar 700 UK Review: Not as good as it could be at £700 »