JBL’s portfolio currently stretches from pocket-money Bluetooth speakers right up to cutting-edge, no-expense-spared studio monitors but all of its products have one thing in common: they’re born of an ethos that places science and research at the heart of every product.

And that means even its most affordable studio monitors, the JBL LSR305P MkII, reap the benefit from technologies that have trickled down from the £14,000 M2.

But wait, hang on a minute: aren’t studio monitors meant for music studios? Not necessarily. Studio monitors are just speakers; there are plenty of good reasons to use them in the home. As most studio monitors tend to be active – that is, they have amplifiers built into each speaker – they cut down on clutter. Simply plug in any soundcard, DAC, smartphone or audio device via a pair of cables and you’re away. There’s no need for a traditional Hi-Fi amplifier at all.

They’re versatile in more ways than one, too. JBL’s LSR305P MkII are as happy sitting on a bookshelf or desk as they are the bridge of a mixing desk. In fact, more so than many speakers at this price: you can subtly tailor the sound to suit the location as a switch at the rear subtly boosts or dulls the treble, and the boundary switch alongside it reduces the bass output for close-to-wall placement.

That aside, the LSR305P MkII look much like any traditional bookshelf speaker, with a single 5in bass driver and 1in tweeter sat above it, each powered by its own dedicated 41W Class-D amplifier. 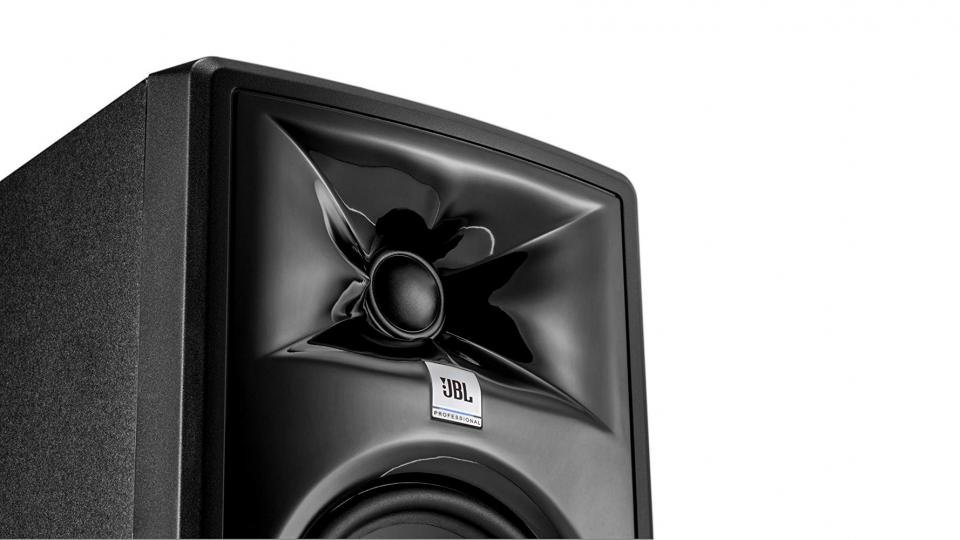 If you like the idea of active monitors, though, then JBL’s larger models may be of interest. The LSR306P MkII (around £400) up the ante with a 6in bass driver and the LSR308P MkII (around £500) move up to an 8in bass driver – both models use more powerful 56W amplifiers for each driver, too. If you crave more volume and bass extension, then our advice is to shop around as there are some huge discounts to be had on the LSR305P MkII’s big brothers. 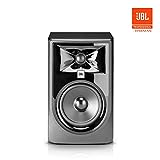 The aggressively-contoured, gloss plastic of the LSR305P MkII’s front baffle won’t be to everyone’s tastes but it’s not purely for show. The scooped-out plastic mould surrounding the tweeter is actually an integral part of the LSR305P MkII’s design – it’s trickle-down tech from JBL’s £14k M2 speakers. This waveguide, so-called because it serves to guide and disperse the sound waves produced by the tweeter, makes sure that treble frequencies are spread as evenly as possible and helps them integrate more cleanly with the lower frequencies produced by the bass driver beneath.

Be in no doubt, though, you can tell that the LSR305P MkII have been built to an incredibly tight budget. The front fascia does look and feel a little cheap, if less so than the previous version thanks to added sound-deadening foam on the inside, and the MDF speaker cabinets respond with a hollow thunk when you give them a firm tap. Compared to the solid, curvaceous Q Acoustics 3000-series, the JBL’s build quality is far more ordinary.

Unlike lesser designs which place all the amplification in one speaker, though, the LSR305P MkII cut no such corners: they have two 41-watt amplifiers in each speaker, one per driver. There are two balanced inputs at the rear, one XLR and one TRS, and power is supplied via a standard IEC input. A switch swaps between input levels suitable for consumer and pro-audio gear, too, which is a nice touch. My only moan? It would have been nice to see locking XLR connectors to prevent yanking out the cables by mistake.

From the off, these do not sound like small speakers. Bass goes surprisingly deep for such relatively small cabinets, and there’s a surprising bit of punch, too. So much so that I initially thought I’d forgotten to turn off one of my subwoofers. This is no exaggeration: the LSR305 MkII make even the similarly-sized Q Acoustics 3020i (£250) sound lightweight and lacking in bass by comparison and bear in mind that I was feeding those with a 250-watt Yamaha power amp.

Switches at the rear of each speaker allow you to cut the bass output by 1.5 or 3db, and boost or cut the top-end by 2db – depending on how close you’re sitting to the speakers, the sound of your room and the position of the speakers, these subtle adjustments ensure the LSR305P MkII sound as balanced as they should. In my room, set up on speaker stands about a foot from the rear wall, I found that leaving the switches in their neutral settings gave the most even frequency response. 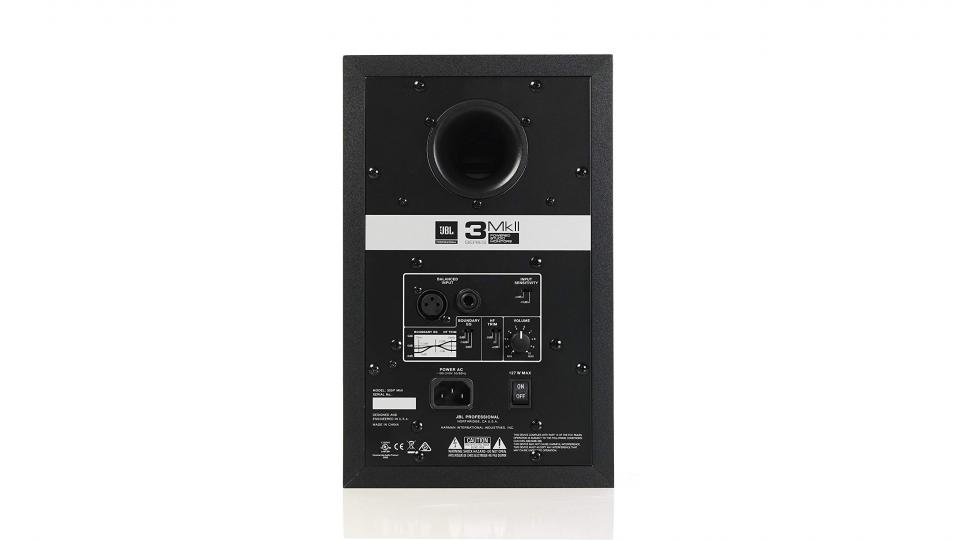 The overall sound is impressive, right across the frequency range, with little in the way of any detectable nasties. Everything from the lowest bass to the highest treble is clear and even-handed – my go-to PMC DB1+ sound very bright by comparison – and musicians and instruments are clearly positioned between the speakers. There’s a decent sensation of depth and space to the sound, too.

What’s really impressive, however, is just how well the LSR305P MkII’s waveguide works. Most stereo speakers produce a focused, narrow sweet spot – a single, almost millimetre-perfect seating position where you get the perfect sense of stereo depth and width, and where vocals and instruments float realistically between the two speakers. The JBL’s are far less limiting in this regard.

Indeed, where my own PMC DB1+ provide a narrow sweet spot such that only one seating position gives ideal results, the LSR305P MkII’s disperse sound so evenly that you can shuffle back and forth, side to side and up and down with precious little change in the overall effect. The sense of depth and space, the tone, and the position of instruments in the stereo image remains far more stable. Going back to standard speakers feels incredibly restrictive by comparison. I also became acutely aware of the sound changing in tone dramatically as I moved around.

The LSR305P MkII do have their limits, however. Sat on a desk, you’re unlikely to find the amplifiers lacking – you’ll induce hearing damage before the amps give out. Position them a couple of metres away, however, and bass-heavy music at relatively high volumes can and will trigger the amplifier’s protection module. The result? The sound suddenly cuts out and the little white LED at the front of the speaker momentarily turns off.

In my experience, electronic music with big, dynamic sub-bass peaks tended to trigger the protection circuit far more easily. Measured with the Decibel Ultra app on my iPhone 7 at my seating position two metres away, bass-heavy peaks of around 85dB triggered the protection circuit – by comparison, other tracks hit peaks of well over 90dB without causing any issues. If it’s block-rocking beats and bass you’re after, no two ways around it: you’ll need to shell out on a subwoofer and filter out the sub-bass frequencies before they hit the JBLs.

My only other point of criticism is an entirely unreasonable one at the price: there simply isn’t the clarity and openness of dramatically pricier speakers. Revel’s Performa2 M16 (£1,000) are currently sitting alongside, and these create a far more convincing illusion of an acoustic space living and breathing between the speakers. The LSR305P MkII sound boxy and less realistic by comparison, something that’s particularly evident with acoustic instruments and solo piano. I suspect it’s the resonances and vibrations from the relatively lightweight box and all-round construction that are colouring the overall sound. There are limits to what you can achieve on a shoestring budget.

However, these are relatively minor complaints. In all, the JBL LSR305P MkII have absolutely no business sounding this good for this sort of money. It’s a shame they won’t play a little louder – the Class-D amps won’t handle heavy basslines at serious volumes in larger rooms – but at normal listening levels, they’re more than adequate. And if they’re sitting on a desk near your head, they’ll go far louder than is entirely sensible. 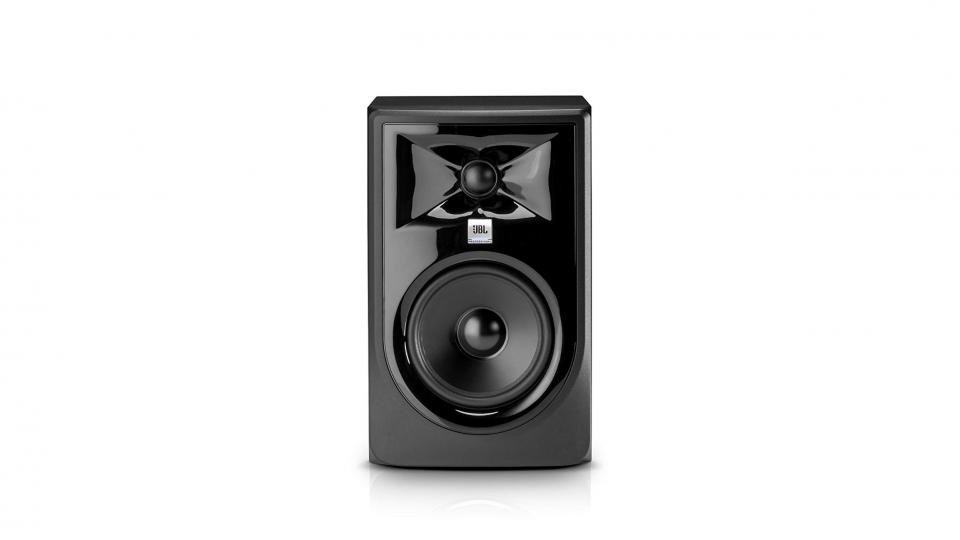 If would be unfair to expect perfection at this price but JBL’s engineers have got pretty close. Sure, we can all dream of having the money and space to accommodate the likes of JBL’s £14,000 M2s but the LSR305P MkII prove that the lessons learned from ultra-high-end audio can create magic for a mere fraction of the price.

The Blink Mini is a new addition to Amazon-owned Blink’s security camera range and it's cheap to buy. ...

GHD has long ruled the hair straighteners roost, but when it comes to hair dryers the British brand hasn't had it quite ...

Ring Indoor Cam Review: A great camera for only £49

A big name like Ring producing at low cost camera of this quality isn't the norm, this is one of the lowest-cost Full HD...

Brief review of two of the highest quality headphones out there

If you are a lover of good quality audio and you are very attentive to how your music, media and games sound then you ar...

Hisense and Roku have been collaborating on televisions for a while now, but only overseas. Enter the Hisense B7120 Roku...

Sage Barista Pro UK Review: It will reward your efforts

Hisense and Roku have been collaborating on televisions for a while now, but only overseas. Enter the Hisense B7120 Roku TV, the first Hisense-Roku effort to land on UK shores.