The Huawei Band 3 Pro has nearly everything you could plausibly want in a fitness band, including GPS, a heart-rate monitor and a vibrant AMOLED screen.

The Huawei Band 3 Pro has nearly everything you could plausibly want in a fitness band, including GPS, a heart-rate monitor and a vibrant AMOLED screen. More importantly, it does this at a price where you’d get change from two £50 notes.

Once upon a time, fitness trackers were glorified pedometers, diligently counting steps and allowing you to check on your progress in an app. While that’s arguably still the core function, most have grown to borrow features from serious running watches, and the Huawei Band 3 Pro does this in spades. 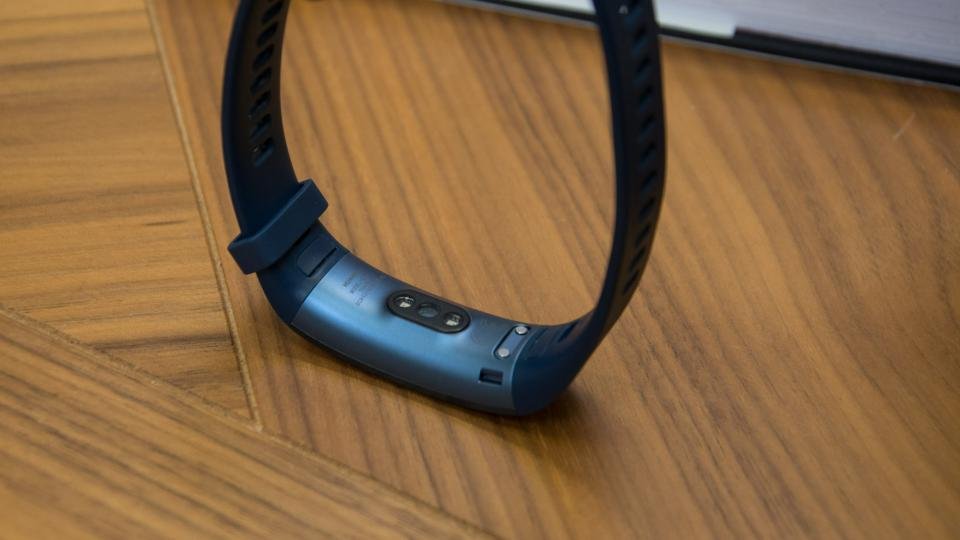 That means it’ll track your steps and sleep as every fitness tracker since the original Fitbit has, but it also has an optical heart-rate tracker and GPS built in for the purpose of outdoor cycling, runs and swims. As with other trackers, indoor activities are also supported, but more as an estimate of exertion. It displays all this pertinent information on a tiny, sharp 0.9in AMOLED touchscreen, which also flashes up your notifications as they come in.

Like smartphones, fitness bands are all beginning to follow the same design cues. In other words, if you’ve seen a Galaxy Gear Fit2, a Garmin Vivosmart 4 or any Fitbit since the Charge 2, you know the kind of thing to expect. A rubber band encases a small unit with a touchscreen on the front, with a heart-rate sensor and charging ports on the back.

Our Huawei Band 3 review model comes in a stylish dark blue, and it’s certainly eye-catching, if not quite as stylish as something like Samsung’s Galaxy Fit2 thanks to its chunkiness and relatively thick bezels around the screen. It is, however, miles more attractive than the Polar A370, and build quality is unquestionably there with its glass screen and a metal frame around the screen.

There are no physical buttons, which I’m always hugely sceptical of for devices that are expected to get wet. Suffice to say that if you’re sweating, running in the rain, or swimming, then touchscreen controls get increasingly finickity. Here, there’s a single touchscreen button underneath the main screen. I’d have massively prefered a stick-out one on the side, even if it did disrupt the band’s symmetry. 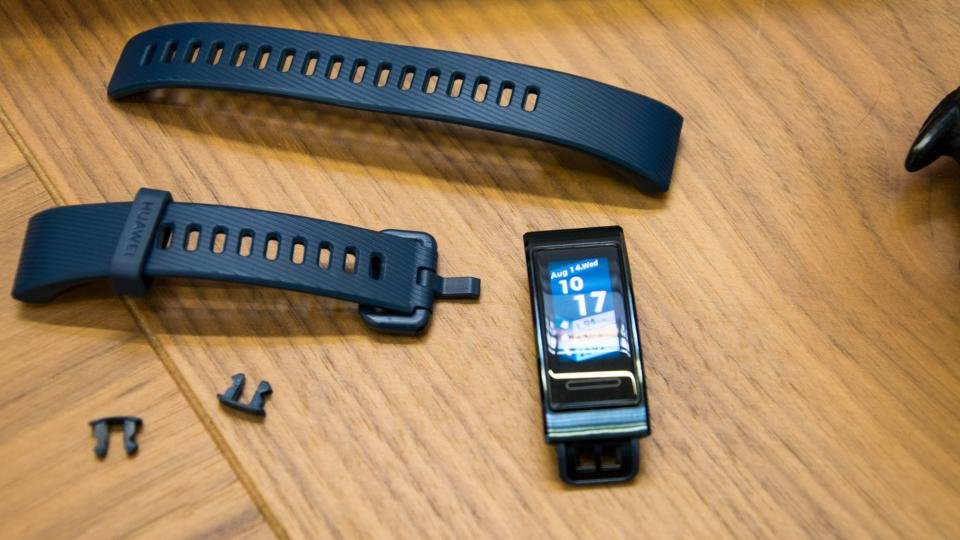 The straps are apparently replaceable but they certainly don’t come off without a fight. I had to give up trying in the end, because even after a prolonged battle with my thumbnails, the plugs holding them in place just wouldn’t budge. My nails seemed more likely to give way before the straps, let’s just put it that way, but my colleague Nathan eventually managed to prise them loose for the photo below. 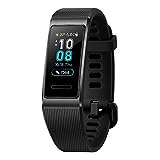 In day-to-day use, the Huawei Band 3 Pro is an understated joy. Your wrist will occasionally buzz with notifications (if enabled) letting you read messages without consulting your phone, but otherwise it’s seen and not heard, only springing into life if you move your wrist sharply.

One negative here: there’s no automatic brightness, and covering the screen doesn’t automatically turn it off like with some of its rivals, which can be especially annoying if you’re prone to moving your arms in bed. There is an option to reduce brightness at night buried in the settings – bafflingly not enabled by default – but it’s not a perfect solution.

The tracker’s software is fairly fair bones, with just three faces to choose from, and there are no widgets for weather or water consumed. Instead, you just have pages for steps, heart rate, sleep, workout and messages. There’s no support for music – even just as a remote control for your phone – and no guided breathing exercises or the like, as you get on some rivals. 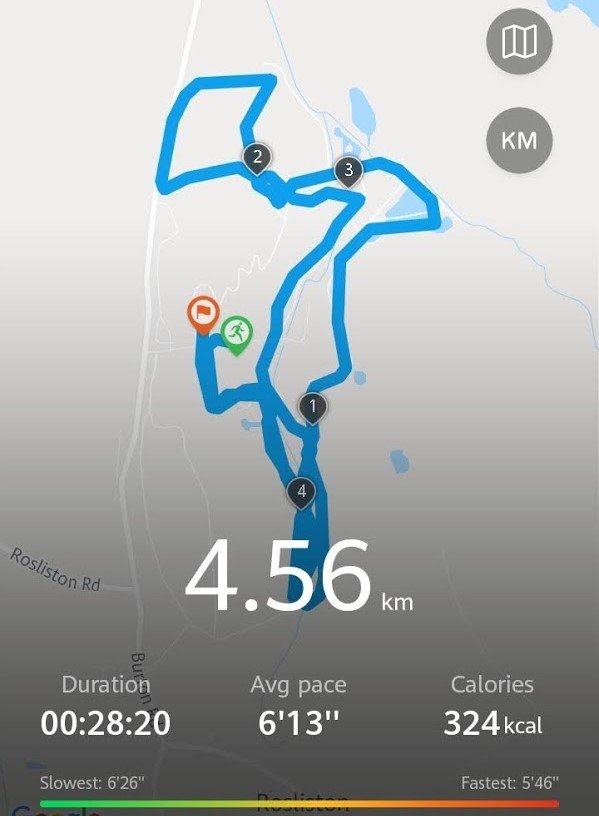 But for the most part it does the job admirably. The real test, of course, is on race day. How does it cope with a measured 5k run?

Not brilliantly: 4.56km is nearly 10% off the total distance. Though to be fair, the Polar Ignite on my other wrist (review coming soon) was even less accurate, trimming another 100 metres off that, so perhaps the tree coverage of Rosliston Parkrun was interfering with reception. A second short run around my south London home gave a distance of 3.41km while plotting the route on Mapometer shows 3.75km. That’s also a 10% margin of error.

On the bright side, heart-rate monitoring seems pretty solid. As you can see from the graph above, my heart-rate over the course of the run peaked at around 174bps, which seems a touch low, but the graph is certainly going in one direction with no weird peaks and troughs as some wearables end up showing.

GPS and heart-rate accuracy aside, the Huawei Band 3 Pro falls into the same trap as all slim fitness bands: there just isn’t enough space on the screen to show all the key running metrics at a glance. Instead, six data fields are shown across three screens, which can be cycled through with a tap. Suffice it to say, this isn’t ideal for serious runners, especially as you can’t change the order they appear in.

Fortunately, the design isn’t too bad here, as the touch button for stopping and starting is sufficiently far removed from the main panel that you won’t end up accidentally ending your run early. And even if you do tap it by accident, you need to hold it for the duration of a three-second countdown for anything to happen.

One area where the Huawei Band 3 Pro really excels is battery life. Despite having a teeny-tiny 100mAh cell powering things (between 2.5 and 3.5%of your average smartphone battery capacity) it goes on and on. Huawei reckons it’ll last up to three weeks on a single charge, or around seven hours of GPS tracking. That seems quite optimistic, but not hugely – I haven’t needed to charge after a week, in any case.

On paper, then, the Huawei Band 3 Pro is both cheaper and more fully-featured than the Fitbit Inspire HR. But Fitbit’s ace in the hole is its app and community, which does a brilliant job of making fitness fun. Or at least more fun than it might be otherwise.

The Huawei Band 3 Pro makes you use Huawei Health, which isn’t a bad app but comes up short out on three things for me. Firstly, it doesn’t have a web interface, meaning that you’ll be examining your form on your phone only. Secondly, the chances are that your friends don’t use it, which means any sense of competition is immediately lost.

The second point wouldn’t be so problematic if it weren’t for the third: in terms of connected apps, you can only share data with MyFitnessPal and Google Fit. There’s no option to export things to Strava, Runkeeper, Endomondo, or anything else. 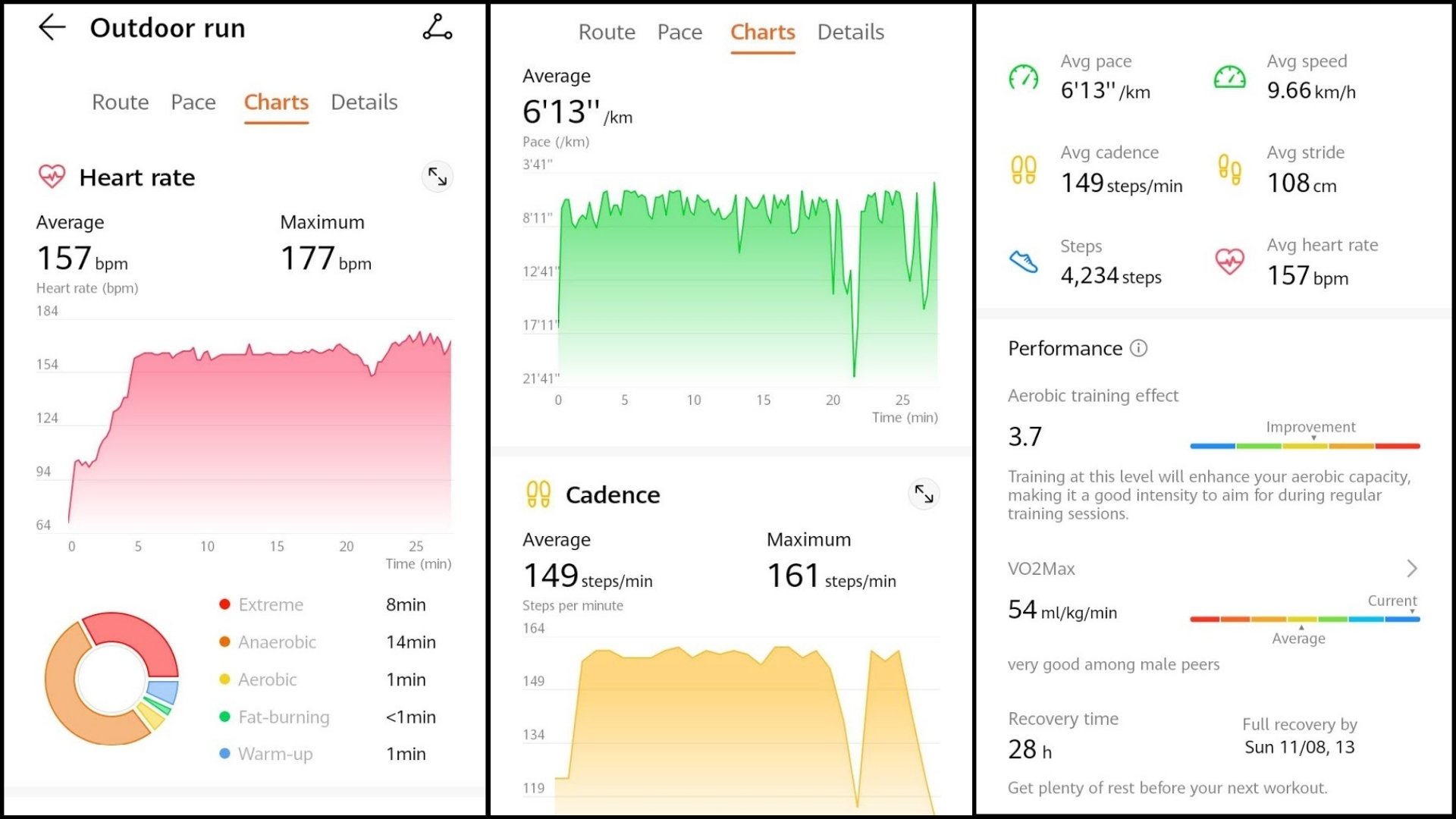 As a big Strava fan, for me that’s a deal-breaker, but if you just want to track things by yourself, it does the trick, letting you easily keep tabs on your steps, exercise and sleep from the main menu. Tapping on any run offers you a granular breakdown of your heart rate, pace and cadence over the duration, with insights about how your fitness compares with your gender and age-group peers.

It’s hard not to like the Huawei Band 3 Pro. It looks nice, has excellent stamina and has built-in GPS. For the price, it’s a great value alternative to rivals that are more expensive, less feature-packed, or both.

But there are definite drawbacks that would make me think twice before buying one. These are chiefly down to its patchy GPS accuracy, limited screen space for run data and, most damagingly of all, an app that won’t play ball with Strava or Runkeeper.

To be entirely fair to Huawei, all of these concerns put me in a category of buyer that should probably be looking at a running watch of at least twice the price. The fact the Huawei Band 3 Pro can even be compared to such devices is about the best compliment I can pay it.

More in this category: « Fitbit Flex 2 Tips and Tricks