Todays gaming laptops are to sleek and stylish esports machines – the Razer Blade Stealth 13 being a prime example.

This year’s update is as portable as its predecessors, but it’s the company’s first sub-1.5kg laptop to feature Nvidia GTX graphics, taking gaming performance to a whole new level. Has the manufacturer created the ultimate ultraportable gaming machine?

Now in its third generation, the Razer Blade Stealth 13 (2019) is a slim and lightweight – yet high-powered – laptop aimed at gaming enthusiasts and content creators. It’s a smaller, more affordable sibling to the Razer Blade 15 (2019), although it’s still far from cheap.

As with last year’s Stealth lineup, Razer offers the new model in three configurations. I tested the top-spec GTX 4K Graphics Model, which is built on a 10th-generation Intel Core i7-1065G7 CPU and an Nvidia GeForce GTX 1650 GPU. As the name implies, it also features a 4K (3,840 x 2,160) IPS touchscreen, and it’s all backed up by 16GB of RAM and a 512GB PCIe SSD.

Then there’s the GTX FHD model, which is the same apart from its lower display resolution and reduced weight. Finally, the FHD Mercury White forgoes the discrete graphics and has a smaller 256GB SSD.

This year’s 13in Stealth looks much the same as the 2018 edition, and that’s no bad thing. Its sleek aluminium chassis measures just 304.6 x 210 x 15.3mm – practically identical to the 2018 Stealth’s dimensions, despite the addition of mobile GTX graphics. At 1.47kg it’s slightly heavier than the 1.31kg FHD model, but the weight gain doesn’t make a noticeable difference. Razer has once again gone for a discreet matte black anodised finish, and the dark-toned tri-snake logo (as opposed to the usual glowing green) is back too. It’s about as subtle and stylish as a gaming laptop can be. 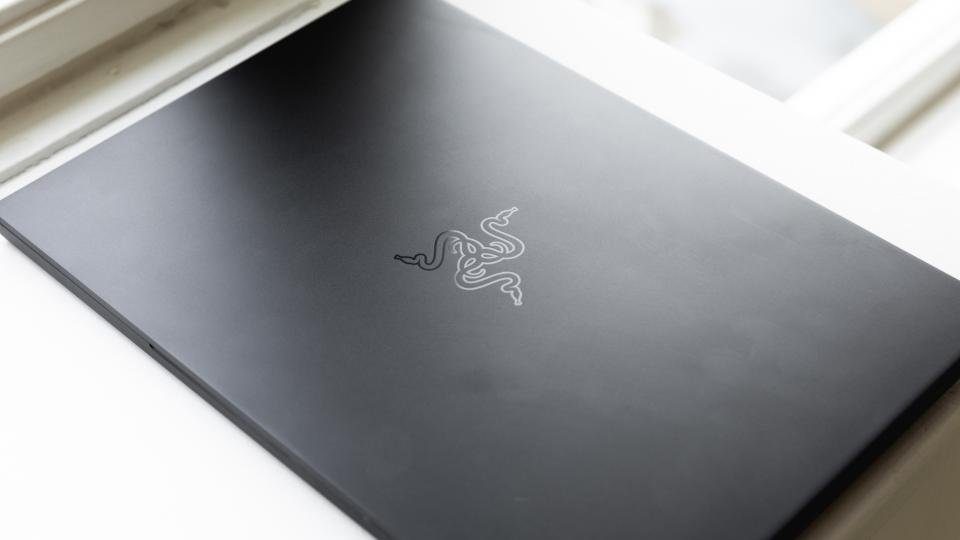 Lift the lid and the sense of quality continues. The hinge offers little resistance but still feels smooth and stable, while the bezels surrounding the 4K panel are just as remarkably slim as they were last year. Up top and centre sit Stealth 13’s infrared Windows Hello sensor and a webcam, which captures good 720p footage at 30fps and copes well with excessively bright or low lighting. 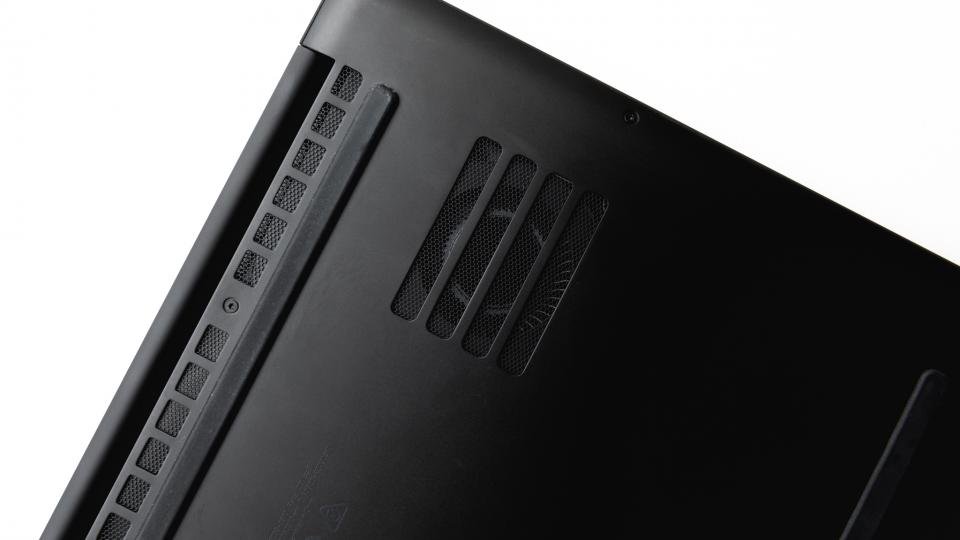 To either side of the keyboard sit the Stealth 13’s quad speakers, which use “Smart Amp” technology to (supposedly) keep everything sounding crisp and clear even at high volumes. Personally I’m not amazed by the audio quality: the speakers are fine for watching YouTube but they don’t get loud enough for my liking, and they’re lacking in bass, which is hardly surprising considering how little space they’re crammed into. For a properly immersive gaming experience, you’ll want to invest in a good gaming headset. 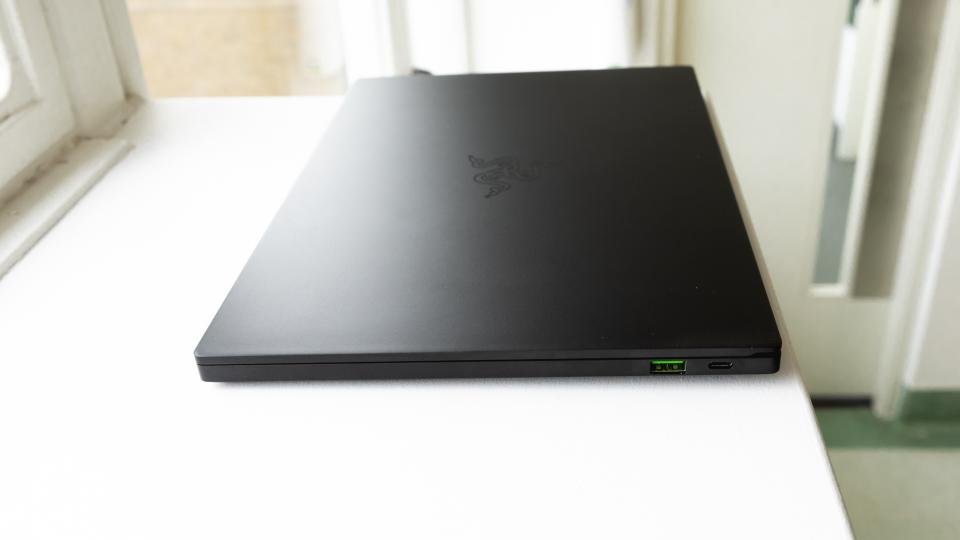 Connectivity options are unchanged from last year: on the right-hand edge you’ll find a USB Type-A 3.1 port and a USB Type-C 3.1 slot that doubles as a power port. The left holds another USB Type-A 3.1 port, a USB Type-C Thunderbolt 3 port and a 3.5mm combo audio jack. It’s not an amazing array, but it’s enough to hook up to an external monitor and a few peripherals while charging. Note though that, while Steam’s VR Performance Test confirms the laptop as VR-capable, you’ll need an external dock with additional ports in order to plug in a headset such as the Oculus Rift S or HTC Vive Pro.

It’s a year since I last typed on a Razer Blade Stealth, but I can say with confidence that the distinctive typing experience, with its compact layout and minimal key travel, is much the same. It’s fine, but it can be hard to adjust to if you’re used to full-sized layouts with NumPads and plenty of space between keys. On the plus side, the keyboard plate is reassuringly sturdy, and barely depresses at all when you push on it. 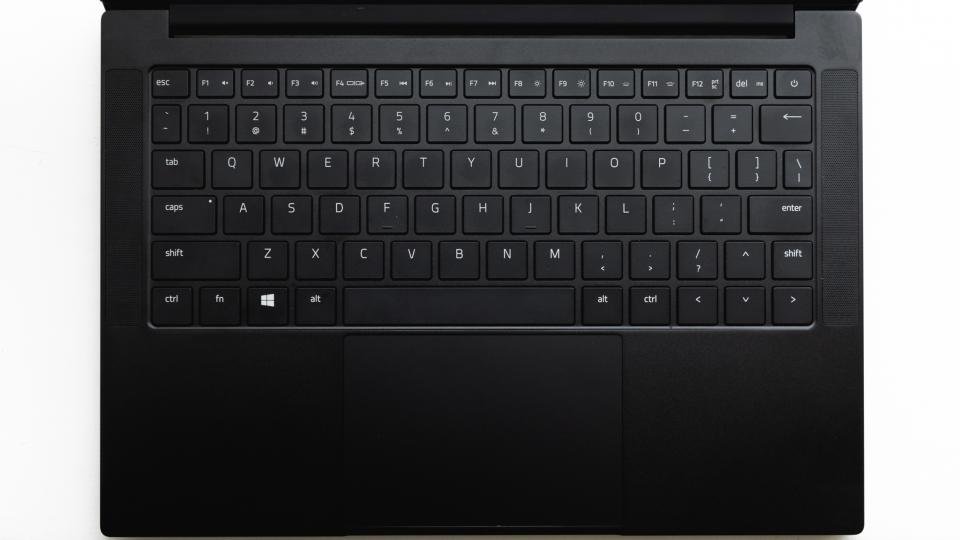 And one upgrade since last year is the addition of the Razer Chroma software, which lets you adjust keyboard lighting effects and sync your settings with other Razer devices. 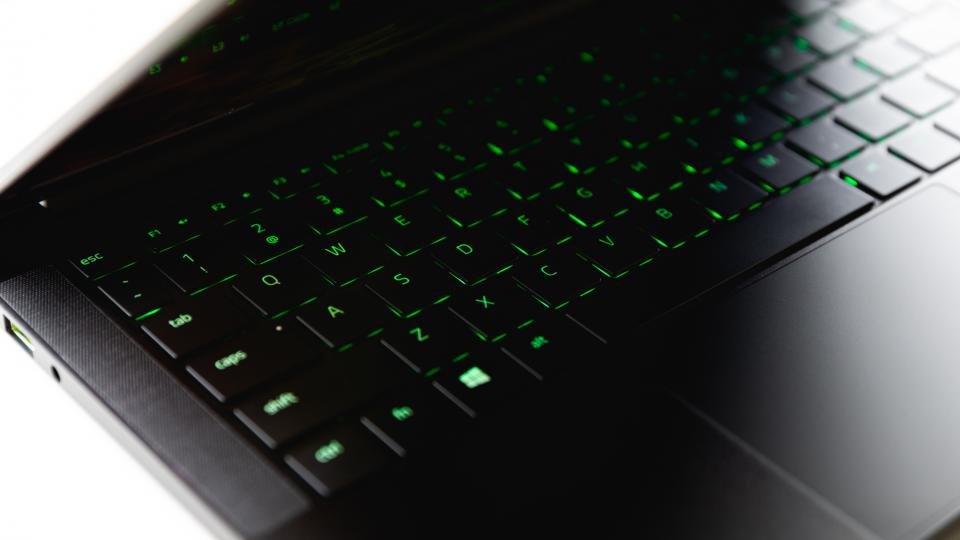 As before, the highlight is the diving-board style touchpad. Razer really makes optimal use of the space here: few 13in laptops have a trackpad of such generous proportions, and it’s not just large but beautifully smooth and responsive. The built-in left and right clickers work perfectly too.

By contrast with the matte, non-touch display of last year’s FHD Stealth 13, the 2019 4K model has a highly reflective touchscreen, finished in glossy Gorilla Glass. Personally I think this is a misstep: the light reflections are distracting when gaming or watching movies, and I don’t think a touchscreen is needed for a gaming notebook like this. If I owned one I definitely wouldn’t be rubbing my grubby fingers all over it. 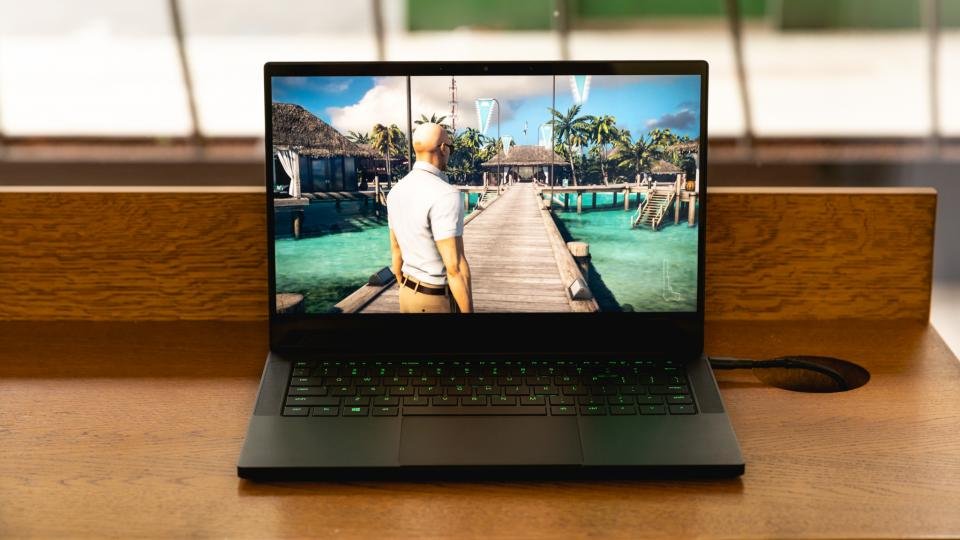 As for colour performance, the 13.3in, 60Hz, 3,840 x 2,160 panel covers 89% of the sRGB gamut, with a volume of 97.6% within that range. That’s decent coverage, and colour accuracy isn’t bad either at an average Delta E of 2.06. That is however markedly less accurate than the 2018 FHD model’s excellent score of 1.15, which is good enough for professional content creators. 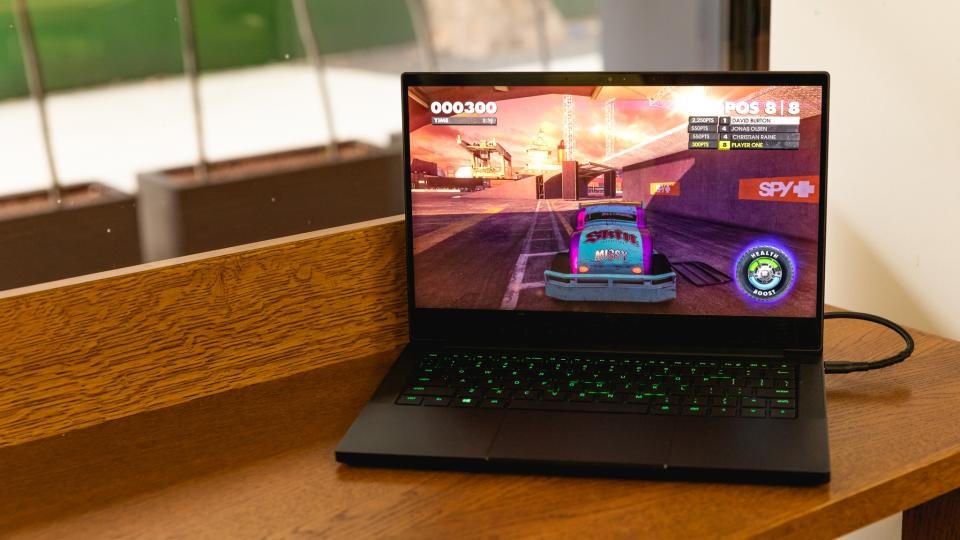 The contrast ratio meanwhile remains at 1,365:1 – extremely close to the last Stealth 13 I reviewed, and about standard for premium notebooks. Darks and lights have plenty of separation, so you can play shadow-dense games and still see what’s going on with ease. Luminance peaks at 354.cd/m2, which is considerably lower than on the FHD model I tested in 2018 but still plenty bright enough for use in any environment short of direct sunlight.

Before we start exploring the Stealth 13’s benchmark scores, we need to talk about performance settings. Razer’s Synapse software allows users to change performance modes with a single click, with available tweaks including manual alteration of the fan speed and a high-powered mode that rather vaguely promises to “increase graphics power”. I spent some time trying out different settings to get the best benchmark results.

Unfortunately, it turns out that tinkering with these impressive-sounding options is a waste of time. At length, I discovered that the way to get the optimal scores from this Blade Stealth 13 model is to set the fan speed to “Auto” and the performance mode to “Balanced”, while setting the Windows power mode to “Best performance”.

Even at its best, the new Razer Blade Stealth didn’t match the performance of its predecessor in our in-house benchmark, which provides a measure of CPU speed, multitasking abilities and thermal management efficiency. That might seem surprising, considering the newer model is powered by a cutting-edge 10th-gen Core i7 CPU while last year’s ran on an 8th-gen model. It makes sense though, as the newer i7-1065G7 processor has a much lower base frequency than the i7-8650U, as well as a lower turbo clock speed.

The advantage of the new chip is that it’s manufactured on a 10nm process as opposed to 14nm, and this helps it stay cooler: during our tests, no core exceeded 82°C, while the 2018 model hit highs of 91°C. And while the new model may not be quite as nippy as last time, 101 is still an outstanding score that’s right up there with the speediest 13in laptops.

At first glance, gaming performance appears to be a step behind the 2018 model too: in the on-screen GFXBench Car Chase test, the Razer Blade Stealth 13 (2019) only managed an average frame rate of 30.7fps, around half that achieved by the 2018 model. Don’t forget though that this unit has a 4K display, while last year’s was only FHD: when you consider that it’s drawing four times as many pixels, it’s actually an impressive result. That’s borne out by the off-screen results, which give a proper indication of the raw gaming power of the Nvidia GeForce GTX 1650 GPU.

The 2019 model’s gaming superiority again shines through in more demanding gaming tests, such as the Metro: Last Light 1080p benchmark. At high detail settings it achieved an average of 85.5fps versus last year’s 39 – although since the display has a maximum refresh rate of 60Hz, you won’t see any benefit beyond 60fps.

The Razer Blade Stealth 13 (2019) does have its limits, of course. In the incredibly demanding Hitman 2 1080p Mumbai benchmark it managed just 15fps at high detail settings, and the game engine’s shadowing and texturing effects caused horrendous flickering on the display. However, taking the detail settings down to medium gave us a very playable 46.4fps at 1080p, and the game still looked fantastic.

The 512GB PCIe SSD inside the Razer Blade Stealth 13 (2019) is pretty speedy, clocking sequential file read speeds of 2,571MB/s and write speeds of 1,821MB/s. Those aren’t groundbreaking ThinkPad-level speeds, but they’re quicker than average and will allow you to save large files and boot up applications in no time.

Believe it or not, despite its quite different internals and screen, the battery life of the Razer Blade Stealth 13 (2019) is all but identical to the 2018 edition, holding out for 4hrs 39mins in our video playback battery rundown tests. Obviously there are laptops out there that last a lot longer, but with its 4K display and GTX graphics, this was never going to be an all-day machine. I'm just happy that the upgraded hardware hasn’t made its longevity any worse.

If you’re mostly into the aesthetics of the Razer Blade Stealth 13, and not so fussed about gaming performance, it might be smart to skip this latest iteration and buy a 2018 model instead. As I write, last year’s hardware is on sale at up to £270 off at Razer’s webstore, with base-spec models going for just £1,030. The older designs are every bit as stylish as the 2019 models, and, as we’ve seen above, the 2018 FHD configuration actually has a slight edge when it comes to CPU performance and multi-tasking, making it a tempting deal at the current price of £1,230. 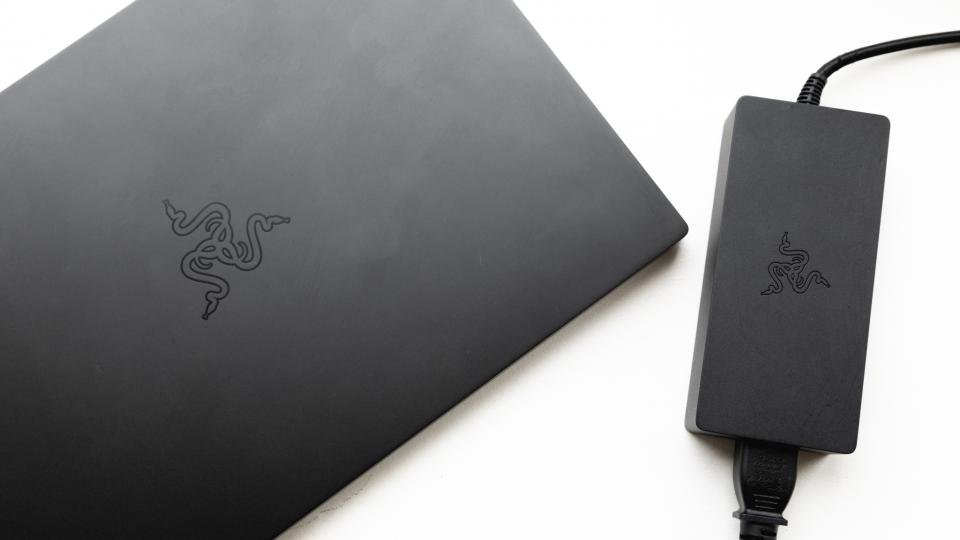 At the same time, there’s no denying that the Razer Blade Stealth 13 (2019) is an exceptional gaming laptop. If you’re seeking unadulterated gaming prowess in a highly portable form then there’s simply nothing out there to compete with it. My only caveat is that I’d nudge gamers away from the 4K model and towards the cheaper FHD GTX configuration, which has a display better suited for gaming due to its lower resolution and non-reflective finish.