The company’s existing smart speakers have proven their use, but the thought of one that delivers sound able to rival Apple’s HomePod is a truly tantalising prospect

I’ve been lucky enough to preview the Echo Studio ahead of its launch next month and can confirm it delivers a sound that belies its small size, while offering several features that Apple’s similarly dustbin-shaped smart speaker is crying out for. What follows are my first impressions of the Studio, along with all its key specs and features. 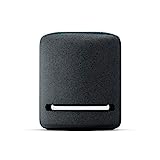 Whether the Echo Studio can go toe-to-toe with the HomePod in the audio quality stakes remains to be seen – I’ll need to hear more than a couple of tracks before coming to a definitive conclusion. But that’s just one part of the equation with a smart speaker. When it comes to smarts, and indeed features and connectivity, the new Echo Studio certainly appears to have the HomePod beaten.

For starters, along with offering instant music streaming via Amazon’s smart assistant Alexa, you can pair the Studio with any Bluetooth-compatible device. That means you can be up and running, streaming music from any service and indeed practically any device within a matter of seconds – something that’s simply not possible with Apple’s smart speaker. On top of that, there’s also a mini-optical/3.5mm input that you can use to connect your TV or another device to the Echo Studio for a bigger sound.

The Echo Studio’s home-cinema credentials don’t end there. If you own a Fire TV Cube or Fire TV Stick 4K, the Echo Studio can be selected as the audio output, instantly upgrading your TV’s acoustic capabilities without the need to connect a single wire. It’s also compatible with Dolby Atmos and Sony 360 Reality Audio, enabling it to deliver what Amazon calls a “multidimensional audio experience”.

On paper, a £190 speaker delivering surround sound sounds impressive, but we’ll need to put the Echo Studio through its paces properly before we can confirm how it compares to a dedicated soundbar or home cinema speaker setup. After all, just how good can one speaker be?

Which brings me to my next point. Although you can pair the speaker with an additional Echo Studio and Echo Sub, Amazon’s keen to point out that you shouldn’t have to. Central to the Studio’s ability to offer a “multi-dimensional” sound is the fact it has a five-speaker arrangement hidden within each unit. This design is what makes it the first smart speaker to support Amazon’s new “3D Audio” format.

As the name suggests, these tracks – which are available to stream with a Music HD subscription – have been “mastered in 3D” to offer a more spacious and immersive sound. Sadly, I’m not sure that I could really hear the difference between the aforementioned “3D” tracks and regular hi-res songs from my seat in the demonstration room, but it’s great to see Amazon investing in delivering a high-fidelity audio experience. Indeed, as well as its new 3D format, a Music HD subscription enables you to stream both 16-bit (CD quality) and 24-bit (hi-res) audio files on the Echo Studio.

So how good does the Echo Studio sound? From where I was sitting – around five metres from the speaker – I was impressed by the scale of the sound it delivered but it’s difficult to come to any real conclusions beyond that just yet. Indeed, to my ears, where some tracks sounded balanced and detailed, others were a little too boomy and bass-heavy for my liking and lacked detail in the vocal ranges.

The Blink Mini is a new addition to Amazon-owned Blink’s security camera range and it's cheap to buy. ...

GHD has long ruled the hair straighteners roost, but when it comes to hair dryers the British brand hasn't had it quite ...

Ring Indoor Cam Review: A great camera for only £49

A big name like Ring producing at low cost camera of this quality isn't the norm, this is one of the lowest-cost Full HD...

Brief review of two of the highest quality headphones out there

If you are a lover of good quality audio and you are very attentive to how your music, media and games sound then you ar...

Hisense and Roku have been collaborating on televisions for a while now, but only overseas. Enter the Hisense B7120 Roku...

Sage Barista Pro UK Review: It will reward your efforts

Hisense and Roku have been collaborating on televisions for a while now, but only overseas. Enter the Hisense B7120 Roku TV, the first Hisense-Roku effort to land on UK shores.