Sega has joined the party with the Mega Drive Mini, so you can relive the 90s arguments of which console was better all over again – only now in miniature form.

This is slightly undermined by the steady stream of somewhat weak Mega Drive collections and consoles over the years, but the good news is that the Mega Drive Mini is the real deal. It’s cute as a button, packed with games and competitively priced.

That’s basically all you need to know, but keep reading if you need a justification to gift it to yourself this Christmas.

Oh gosh, where to begin. Once upon a time there was a company called Sega that made consoles with games about fast hedgehogs, averagely paced dolphins and kids called Alex. The Mega Drive, arguably, was the company’s finest hour, going toe to toe with Nintendo’s SNES in the 1990s. 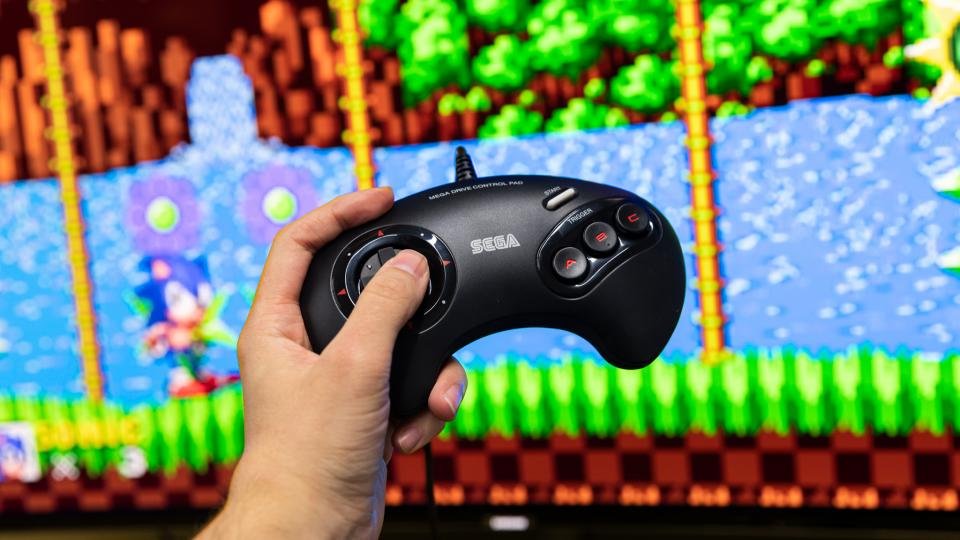 This is a nostalgia trip for fans of the machine who now have bigger disposable incomes than they did 30 years ago. It’s a dinky version of the console designed for modern HD TVs with HDMI inputs, and has 42 games built-in. It also comes with two pads for a bit of competitive or cooperative multiplayer. 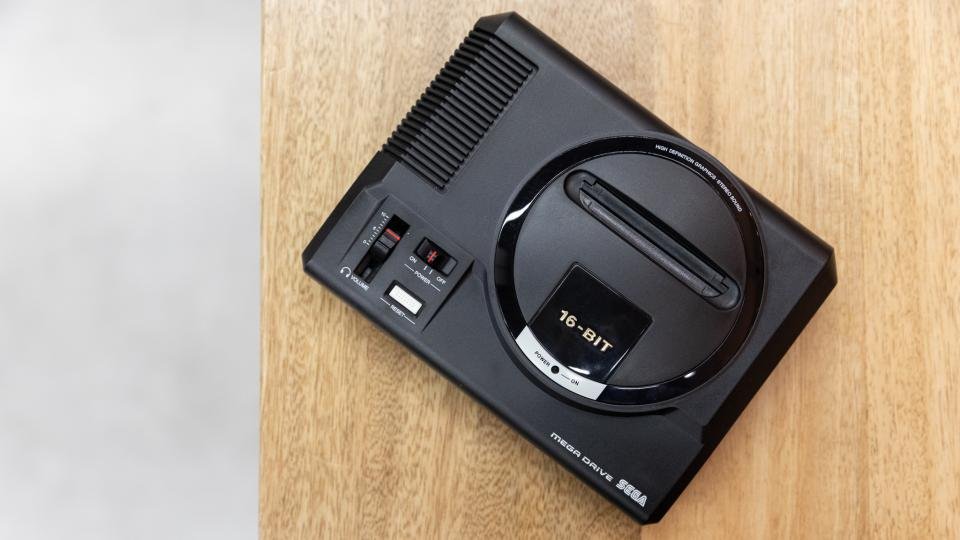 If that doesn’t appeal, there’s the 20-game PlayStation Classic but, well… chalk that one up to “missed opportunity.” Still, if you’re tempted, it tends to go for around half price these days, hovering at the £40 mark.

Or, of course, you could buy a PlayStation 4, Xbox One or Nintendo Switch. But they don’t come with any games and besides, weren’t things better in the 90s anyway? (Hint: if you don’t agree, you’re probably reading the wrong review.)

It’s not just that you’ve grown: the Mega Drive Mini is teeny tiny. Here it is next to the OG Mega Drive currently residing in my bedroom. 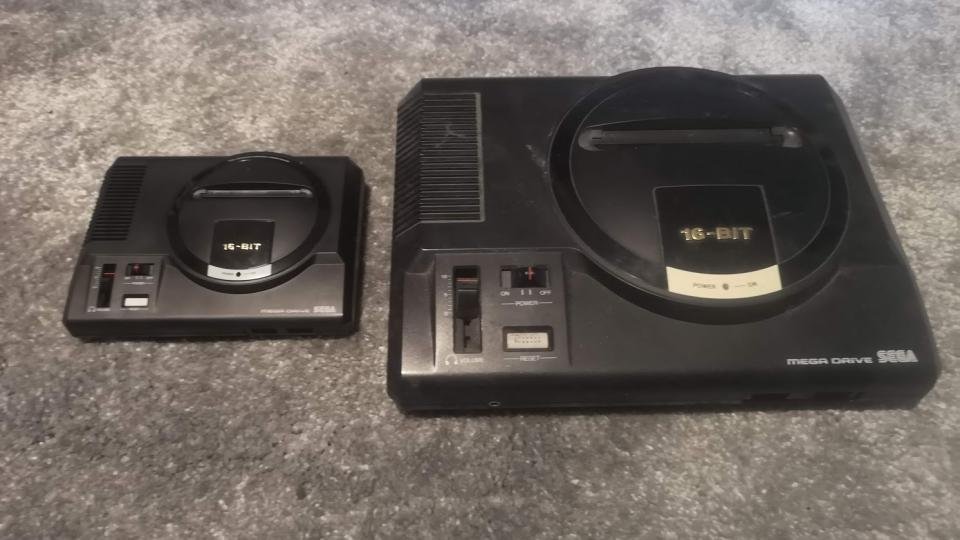 It is, however, cute as a button. It’s smaller than the two bundled gamepads, but despite this is packed with details. The on/off button offers the same feeling of resistance, the reset button is where you expect it to be, and there’s even the volume slider on the top. The latter of which doesn’t do anything nowadays, but it’s still a nice touch. The same is true of the game cartridge slot which doesn’t actually support additional games, but still flips open when you poke your fingers in. Neat!

Unlike my original Mega Drive, this one has two official pads (both USB), so there’s no fighting over who gets the naff off-brand one with a ‘turbo’ button. These are as ergonomic as ever, though the drop to three buttons is a bit of a culture shock to modern gamers. It’s a pity Sega didn’t include the six-button variants, because three buttons makes Street Fighter 2 a bit of a drag – you have to awkwardly press ‘start’ to toggle between punches and kicks.

The gamepads are both wired, which means you need to sit reasonably close to your TV, but that just adds to the sense of nostalgia. The cables are comfortably long, though, so this isn’t a repeat of the Classic Mini NES fiasco. 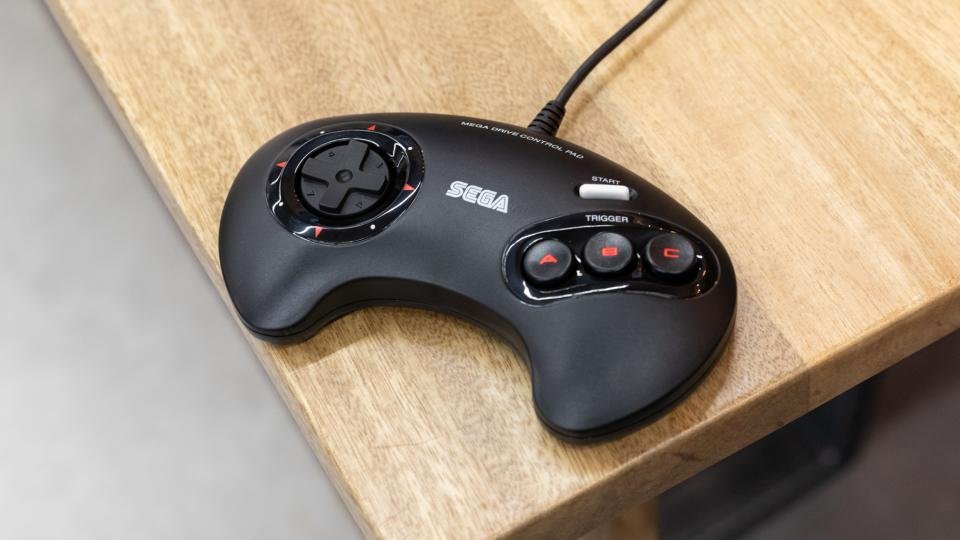 However, like the dinky Nintendo consoles, the Mega Drive Mini doesn’t come with a plug. Yes, it runs off a microUSB cable, and most people probably have an adapter, but it still feels a little on the cheap side if you have to supply your own.

First off, I need to congratulate Sega on the games library both in terms of volume and quality. There are 42 titles in total – double the number on the SNES Mini – and the list includes plenty which are stone-cold classics, prohibitively expensive to buy in cartridge form, or both.

I’ve included a full list of the games as an appendix at the end of the review, rather than break up the flow here, but suffice it to say it includes the likes of Sonic, Sonic 2, Shinobi 3, Altered Beast, Castle of Illusion, Street Fighter 2, Ecco the Dolphin, Alex Kidd, Streets of Rage 2, Columns, Earthworm Jim, Golden Axe and Road Rash 2. There’s also Tetris, which came out on the Japanese Mega Drive in extremely limited quantities and is suitably expensive as a result. The emulation feels solid, too, with no patchy playback like with the Sony PlayStation Classic.

It’s a great list, although there are definite sad omissions. Micro Machines 2 being the main one for me, although I’d have also loved to see Sensible Soccer and maybe the original FIFA, too.

Of course, it feels ridiculous to moan about what’s not there when there’s so much good stuff in the mix, and almost as important as the list itself is the presentation, which is pretty much spot on. You can browse all the titles by original box art, or turn them on their side as if they’re on your own virtual shelf, and each two-player game is clearly marked as such. Like the SNES mini, you can switch aspect ratios, neatly darting between 4:3 and widescreen, and you can even add CRT lines for a bit of authenticity.

To change games, you don’t need to get up and press the reset button (though you can if you wish) – instead, you can just hold down the start button, which also lets you save at any point: a big concession to modern gamers who might struggle with the old hard-as-nails gameplay of the original hits. There’s no rewind function like on the SNES Mini, but it works well enough.

Anyone worried the Sega Mega Drive Mini might be a shameless cash in needn’t have worried. The games library is generous and full of classics, emulation is solid, presentation is top notch and the price is fair. As retro console remakes go, it’s the definition of a five-star product. 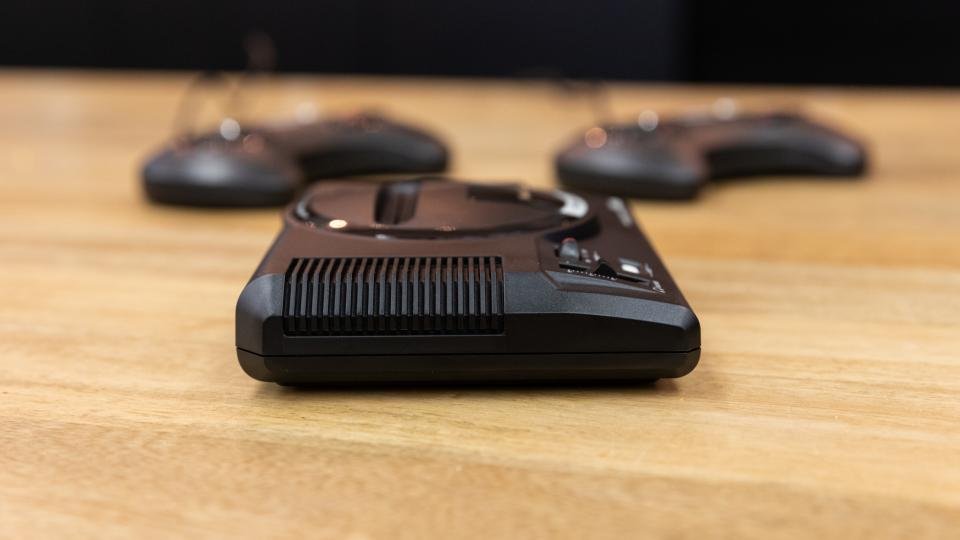 The six-button version of the pad would be nice for Street Fighter 2, and I’m still a bit upset that Micro Machines 2 didn’t make the cut, but these are nit-picking points. The Mega Drive Mini is every bit as good as the SNES Mini – only it has double the games. Nintendo may have won the console war overall, given it’s made three consoles since Sega shipped its last, but in the battle of mini machines, it definitely has the edge.