It doesn’t take long for the guilt to set in. You’re holding a handgun in London’s Piccadilly Circus as terrorists run wild with assault rifles and flames bloom from a recently ignited suicide vest.

As terrified civilians run past, screaming and wounded, you’re thinking: “Where is the next mission checkpoint?”

Call of Duty is perhaps the most divisive mainstream gaming brand of all time; a gung-ho, partisan blockbuster combat romp selling us a vision of rough and ready spec-ops superstars travelling the globe with their guns and their competence, helping freedom fighters while killing rogue paramilitary groups, without pausing too long to consider the differences between them.

In 2019’s Modern Warfare, a reimagining of Call of Duty 4: Modern Warfare from 2007, you take control of SAS and CIA operatives as they aid rebel forces in the fictitious country of Urzikstan, which borders Russia and is fighting for its independence. A stash of chemical weapons has gone missing and must be located while an extremist Russian military faction is quelled.

The story is a pulpy, mashup of real-world proxy wars and brutal localised conflicts that panders to US sensibilities. Urzikstan could be Syria, it could be Afghanistan, it could be the Ukraine or Chechnya. It doesn’t matter. What matters is that hard men and women are putting their lives on the line in hidden, deniable ops where the rules are bent – and that can include the odd war crime.

The problem is, it’s fun and it’s really well made. Modern Warfare looks astonishing, from the almost photorealistic cinematic sequences to the intricately detailed in-game environments: the desert towns, the city streets, the remote villas. Sometimes you just have to stop and admire the orange glint of the sun off a burned-out vehicle. 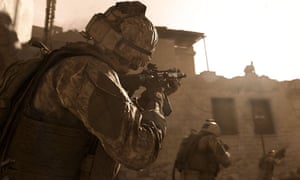 And this is the best campaign since Call of Duty 4. From an incredibly tense raid on a terrorist stronghold in north London to a bloody siege on an embassy roof, it is exciting and brilliantly paced. There are references to the series’ past, with particular moments – a helicopter raid during which you take control of missiles from the air; a long-range sniper mission – that will remind veterans of classic missions Death from Above and All Ghillied Up. There is always some new high-tech toy to try, or a fresh perspective on the battle in hand.

All the while, you concede that this is a polished game made by a US studio, studying, and arguably excusing, American military and political methods. There has already been significant controversy surrounding the Highway of Death mission, which features the slaughter by Russian military of escaping civilians but bears a close resemblance to a real-life US-led action against retreating Iraqi military personnel in Kuwait in 1991, also later known as the Highway of Death. This switching of culprits has led to the game’s rating on review site Metacritic being bombed with negative comments from apparently Russian players.

True, the game does try to muddy (or perhaps more accurately bloody) the waters of which side is good or bad, right or wrong. There are key Russian allies in the game who are crucial to your mission, and we’re encouraged to view the main antagonist, Russian general Roman Barkov, as a rogue player, disowned by his country. At the same time, we see western forces break the rules and commit ethical crimes which the player has to decide whether to be a part of. There is a lot of bluster about blurred lines and “fighting with gloves off”, but it just amounts to chatter in the wind before the next barnstorming set-piece.

Yet the ridiculously chaotic Ground War mode, which pits two teams of 32 players against each other on a large map with armoured vehicles and helicopters, is exhilarating if wildly unpredictable, while the more contained mode Gunfight has teams of two competing in very small areas with a range of weapons. This is tense, highly controlled multiplayer action – not quite up there with Counter-Strike for tactical purity but as close as Call of Duty is ever likely to get.

Can we enjoy Call of Duty: Modern Warfare without being revolted by or sucked into its skewed, cliche-ridden interpretation of geopolitics and asymmetrical warfare? We have, after all, had many years of the Hollywood-military complex selling us smartly packaged, exciting thrillers such as Black Hawk Down, Hurt Locker and Act of Valor, all of which have been questioned for their depiction of US military actions. The Liam Neeson movie Taken is an awful analysis of human trafficking but an amazing mainstream thriller.

Call of Duty Modern Warfare, meanwhile, is a slickly produced, well constructed military shooter filled with thrilling set-pieces and moments of fraught tension. It’s also a good run-and-gun online shooter, which wants to bring something fresh to the way online team-based competition works in this genre but isn’t quite there yet – new maps will inevitably follow.

If you tire of the online action, there is always the campaign to replay at a higher difficulty level. A new “realism” mode takes the challenge up to max, removing all the on-screen information so you have to rely on memory and your senses to know if you’re about to run out of ammo or if a grenade has just rolled up alongside your cover point. This mode brings a whole new dimension of heart-in-the-mouth suspense, completely changing the pace and complexion of the action. Despite yourself, you are dragged into the fray again.