Whichever size you opt for, you get a 4K (3,840 x 2,160) VA-type LCD panel with a refresh rate of 60Hz and, as you’d expect at the price, all have bog-standard edge-lit LED backlighting. It’s good to see that support for the HDR10+ and Dolby Vision formats have made the grade, though.

You can get a brief overview of the specifications in the table below, followed by an in-depth look at the GX800’s design, features and image quality.

Design-wise, there’s little to get too excited about. The rectangular TV stand is made of cheap plastic and extends a few inches forward from the display, with two small legs jutting out at the back to provide some balance. 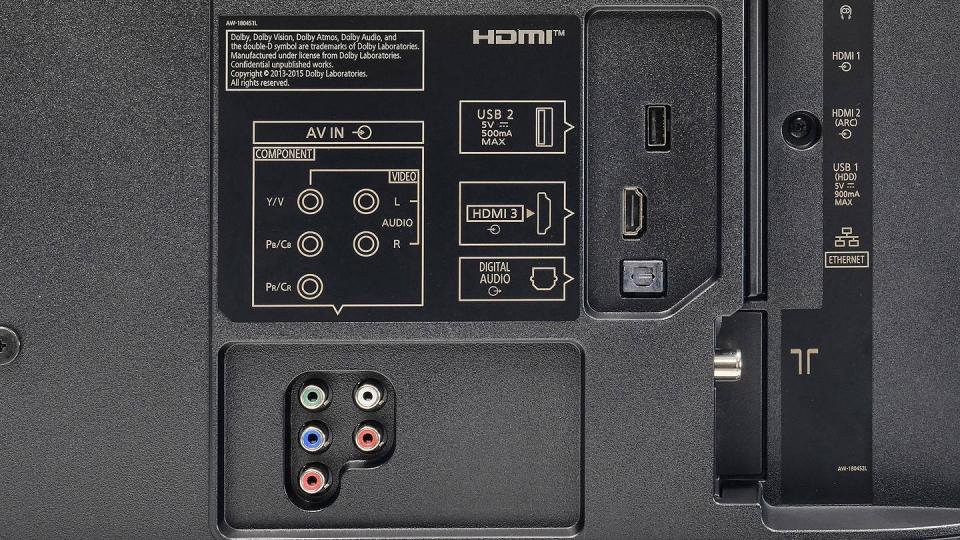 Connectivity is similarly unremarkable. There are only three HDMI 2.0b ports, all located at the rear of the panel towards the left-hand side. The only HDMI 2.1 feature supported here is ALLM (Auto Low-Latency Mode), which automatically switches the TV to its ‘Game’ mode when compatible gaming consoles are connected.

Panasonic has provided a slender, conventional black remote control. The rubberised buttons have a good amount of sticky feedback that makes them satisfying to press, but the plasticky build quality and bizarre layout could be improved. For some reason, the Freeview Play shortcut sits down on the bottom-right of the remote, while the dedicated Netflix button is nestled beside the ‘Home’ and navigation buttons towards the top. 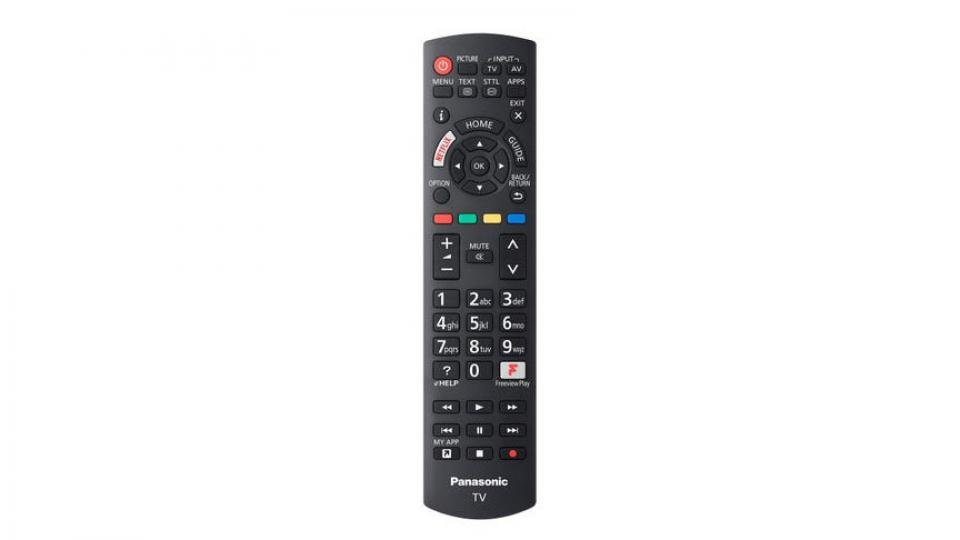 The GX800’s hub, My Home Screen, is the fourth generation of Panasonic’s Smart TV home platform. Navigating this screen feels easy and fluid, with all of its content apps laid out in a logical manner. These include streaming stalwarts such as Netflix, Amazon Prime Video and YouTube as well as Freeview Play, through which on-demand UK services like BBC iPlayer are accessed.

Unsurprisingly, and like most of its peers, the GX800’s sound quality is utterly average. Few high-end TVs deliver cinema-quality audio, though, so the lacklustre sound of the GX800’s stereo speakers is no reason to avoid it. No matter which TV you’re buying, a decent soundbar will make all the difference.

The GX800’s display produces lovely, inky deep blacks – by LED LCD standards, at least. Contrast levels are excellent, too, meaning images have a good level of punch and pop.

The GX800’s colour accuracy is another huge plus point. Colours on the screen appear rich and natural, with no visible colours tints or oversaturation, and the greyscale response measures accurately right out of the box, meaning that there’s no need to pay for professional calibration. It’s highly unlikely you’d be forking over for an expensive calibration service if you’re buying a mid-range TV, so it’s a good thing it’s not a requirement here. If you want to pick holes, then the GX800’s colour performance isn’t as accurate as on Panasonic’s pricier OLED TVs, but that’s extreme nit-picking – it’s still excellent for the price.

Colour uniformity across the display is, on the whole, pretty good for a £600 TV. There is some mild dirty screen effect (DSE), but nothing to worry about. Essentially, on test slides where the whole screen should be one particular colour, the screen is slightly darker around the edges than in the middle – hence it looking ‘dirty’. You’re far less likely to notice this with most real-world content. 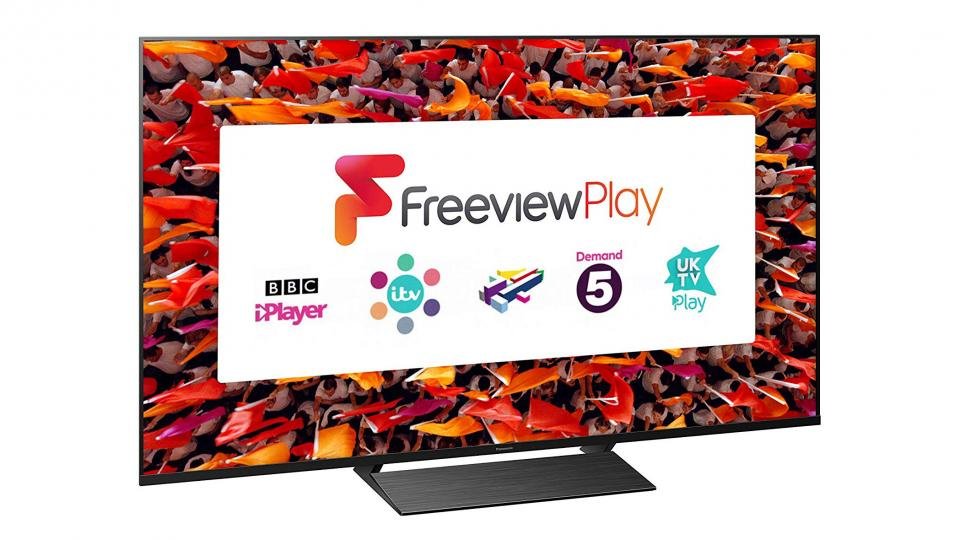 The other criticisms of the GX800’s performance are par for the course at this price. The first is its narrow range of viewing angles; just like most sub-£1,000 TVs which use VA panel technology, the best way to view this TV is directly head-on.

The screen’s highly reflective finish doesn’t help matters either. If your room isn’t sufficiently dark, you may be able to see your own image or bright lights mirrored on the panel. This isn’t a deal-breaker by any means but it could be distracting in some living rooms. A less reflective finish would definitely have been preferable here.

Unlike more expensive TVs that can afford to implement full-array local dimming (FALD) backlights, the Panasonic has to make do with a simple edge-lit LED arrangement. As usual, this means that the black bars above and below letterbox movies aren’t as black as they should be. On a positive note, though, there’s hardly any noticeable blooming: something that’s often an issue on mid-range TVs with limited numbers of FALD zones.

The GX800’s 60Hz panel struggles to produce the kind of slick, smooth motion which you’ll find on pricier sets. Playing 24p video formats (from Blu-ray discs, for instance) results in noticeable judder, so it’s necessary to change the display’s Intelligent Frame Creation (IFC) setting to at least ‘Mid’. And while this does remove judder, it does so at a cost: it also introduces the dreaded soap opera effect where on-screen pans and movement look just a tad too smooth and floaty.

Standard definition content looks surprisingly good on the Panasonic GX800 thanks to its very capable video processing. Lower resolution content is upscaled adeptly to the 4K panel, and while there are a few artefacts and a few more jagged edges visible than on rival sets from Samsung or LG, it’s still a very competent performance overall.

The GX800 supports various HDR formats including HDR10, HLG, HDR10+ and Dolby Vision. In our tests, it covered a very respectable 96% of the DCI-P3 colour gamut and achieved a peak brightness of 340cd/m2 on a 10% window and the same when measured across the whole screen. That doesn’t sound like much – and it isn’t compared to pricier sets – but the HDR performance is far better than those numbers suggest.

At its default settings, the GX800 valiantly attempts to retain HDR highlight detail even on content mastered to an eye-searing maximum of 4,000cd/m2, but this combined with the limited brightness means that the brightest onscreen elements still look blown out.

Activate the Dynamic HDR Effect setting, however, and things improve drastically: you get richer colours and more highlight detail without affecting the overall brightness of the onscreen images. It’s a similar story with Dolby Vision content: it makes the most of the Panasonic’s limited brightness, with an improved richness to the image and more detailed highlights.

One tip that’s worth noting, however, is that during dark-to-light scene transitions there is a minimal level of backlight fluctuation. If you want to get rid of it, then simply make sure that the Adaptive Backlight Control setting isn’t cranked to ‘Max’.

The ALLM feature we mentioned earlier is currently only supported by the Xbox One X, but it’s a nice time-saver nonetheless: fire up the console, and the GX800 automatically kicks into ‘Game’ mode. For other gaming platforms, users will have to navigate through the settings menu and enable the ‘Game’ mode manually.

The clincher here is that the GX800 has an input lag of just 15ms in both its 1080p and HDR modes. An input lag of 15ms would be considered more than acceptable for a gaming monitor, and for a TV it’s competitive with the most responsive models on the market – and that’s at any price.

The Panasonic GX800 does have its flaws, but it also represents fantastic value for money. It delivers good image quality across the board, and the accurate, natural-looking colour reproduction makes it easy to overlook its limitations. The fact that it makes a decent fist of HDR content is nothing less than remarkable, too. There are no two ways about it, Panasonic has delivered arguably the best mid-range 4K HDR TV of the year.

These are time limited offers so the price may vary after publication. This article contain Amazon affiliate links, which means we may earn a small commission (at no extra cost to you) if a reader clicks through and makes a purchase.