At any one time, there’s a sweet spot for computers. That sweet spot, for the moment at least, is the 13in ultraportable.

One reason to stick with the XPS 13 is speed: Dell still provides the best cooling setup in a 13in ultraportable, which enables it to make the most out of a Core i7-8565U processor. That chip, combined with 8GB of memory and a 256GB SSD, scored 95 in our benchmarks, while this HP Envy 13 only managed 85 with 16GB of RAM. In fairness, that’s still respectable. It’s just that the chip was typically running at 2.3GHz to keep its four cores comfortably below their 100°C threshold. HP doesn’t include the fastest SSD around, but sequential read and write speeds of around 1,300MB/sec and 650MB/sec respectively will rarely hold you back. 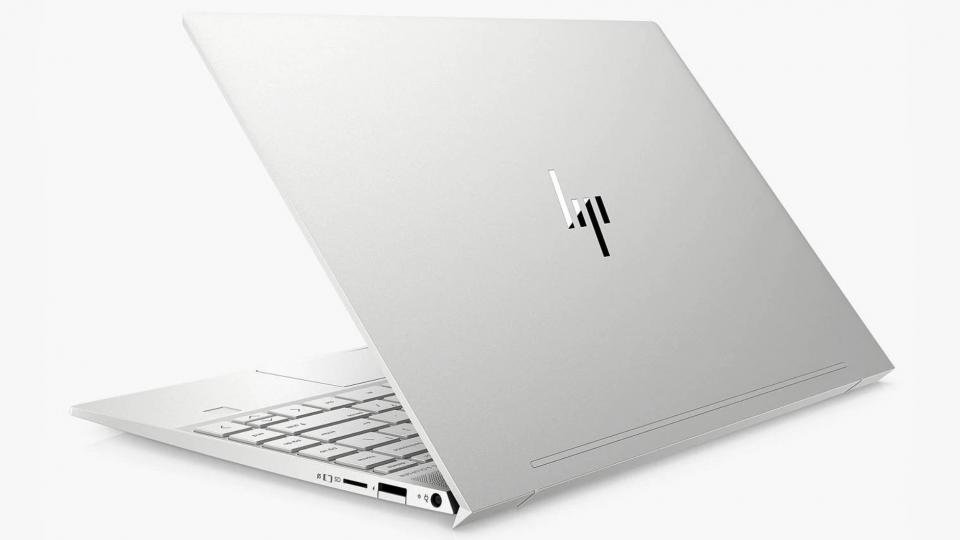 Plus, HP has a trick unavailable to Dell: Nvidia graphics. While the GeForce MX250 sits closer to Intel’s UHD Graphics than it does to a GTX 1060, it can still run many games that are beyond the reach of Intel’s integrated chip. For instance, it averaged 56fps at 720p in Dirt: Showdown, and even managed 36fps in Metro: Last Light at 1080p.

Games and movies look fantastic on the bright 13.3in Full HD display, with a glossy finish that extracts every last ounce of colour from images. It helps that the display packs a 1,842:1 contrast punch. You can trust that the colours you see are accurate, too, with a stunning average Delta E of 0.39 and a maximum of one. Combine that with 98.6% coverage of the sRGB gamut and you have the best image quality results yet from a 13in ultraportable.

Its speakers aren’t the same stellar quality, but they’re still good partners for a film. Besides, there’s a 3.5mm jack on the left edge, along with a USB-C and USB connector. Curiously, HP uses a tiny flap for the latter, as if the Envy 13 is so slim it couldn’t squeeze in a normal slot; in truth, it’s quite slender at 14.7mm, but no one’s jaw will drop when they see it in profile. The other side holds a second USB port, microSD slot and a button to turn off the webcam, and it produces such shocking results that it’s best left unused.

When you lift the lid it also lifts the rear of the chassis, which supposedly helps both airflow and the typing angle. I’m sceptical about the latter – there isn’t enough of a hike to notice – but the keyboard is pleasant to type on with plenty of travel on the keys and a soft feel. The Enter key is only single height, while it’s a standard touchpad so you don’t get the smooth, glass finish of higher-end laptops, but these are both easy concessions to live with.

The feature I miss more is an infrared webcam to log in. There’s a fingerprint reader, and it worked every time, but it isn’t as convenient.

But these are minor criticisms. HP already had the best “value” ultraportable around with last year’s Envy, and all the upgrades – the superior screen, faster components, improved battery life – mean this isn’t just our preferred budget machine but our 13in laptop of choice.