The 3X Bluicer Pro by Sage is a 2-in-1 device that acts as both a juicer and blender, or you can combine the two for a smoothie/juice hybrid.

This new product builds on an impressive list of blenders and juicers from Sage, although the Bluicer appears to reside in its very own category on the company’s website.

Being able to produce litres of fresh juice and smoothies is pretty much impossible without the proper equipment. The Bluicer lets you do both quickly and with relative ease.

Aside from the obvious benefit of having two products in one, you'll also be able to use your own fresh juice in smoothies instead of reaching for shop-bought stuff. Moreover, some ingredients, such as kale, don’t take well to juicing. So the ability to chop and change between the two functions gives you the opportunity to create more complex drinks.

The 3X Bluicer Pro is a centrifugal juicer, meaning it uses high-speed force to blitz fruit and separate the pulp from the juice. This centrifugal force also pushes the juice from the main chamber into the blender jug or directly into your glass. The blender attachment not only makes smoothies, but can also make desserts, sauces and frozen cocktails. 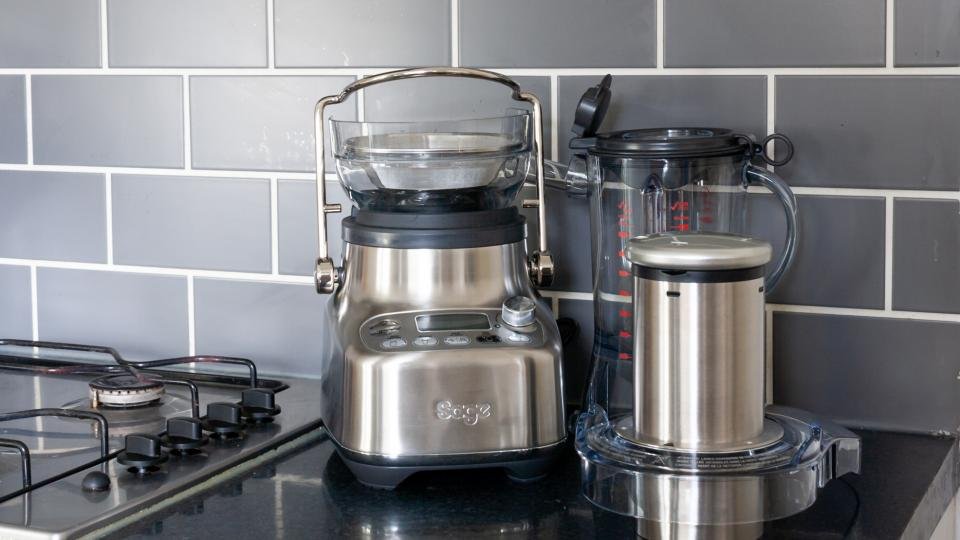 In the Bluicer’s box, you’ll find the juicer base and blade, a 1.5l plastic blender jug, 2l plastic pulp bucket and plastic food pusher. It also comes with a variety of accessories, including a silicone juice stopper, a silicone funnel for juicing directly into cups and a plastic cleaning brush. With the exception of the pusher, these parts are all dishwasher-safe.

It’s also equipped with an 88mm-wide chute, allowing you to juice most fruit whole, minimising chopping time and saving on washing up. If you buy the Bluicer through Sage’s website, you’ll also be able to send off for a complimentary Vac Q. This is a neat little device that’s supposed to make your smoothies and sauces brighter and more velvety in texture by pulling the air out of the blender jug. 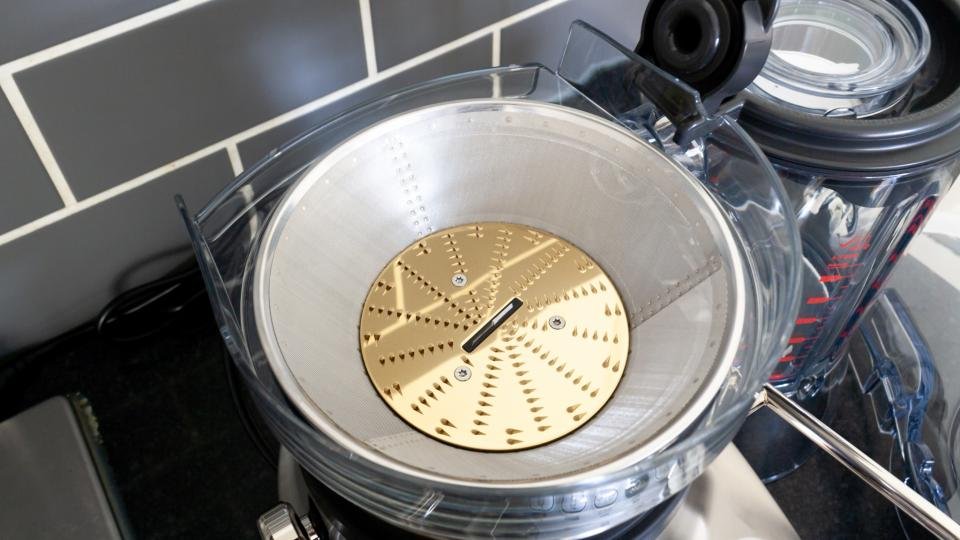 If you wanted to purchase a blender separately, you could go for something like the similarly powerful VonShef Professional Blender for £65 but you’ll then have to find space on your counter for yet another bulky product. The space-saving benefit of having a 2-in-1 like the Bluicer shouldn’t be overlooked here.

Aesthetically, the Bluicer is an absolute stunner. The blending and juicing attachments sit atop a fingerprint-proof, brushed stainless steel body, which looks sleek and is incredibly easy to keep clean. The pusher, though plastic, is also a sleek silver and without handling it, you wouldn’t guess it was made from a different material to the Bluicer’s housing. Even the inner juicing blade, which you’ll rarely see, is a delight to look at because of its attractive gold colouring.

On the front, there are five one-touch settings for green smoothies, general smoothies, ice crushing, frozen desserts and frozen cocktails. There’s also a self-cleaning function that works with the blender attachment but not the juicer. The dial on the front has ten manual speed settings that can be used for both the blender and the juicer. For juicing, soft ingredients are processed at lower speeds and firmer ones at higher speeds. Sage includes a handy chart in the box to give you an idea of what speed you should be juicing at for most common fruit and veg, so there’s no guesswork involved. 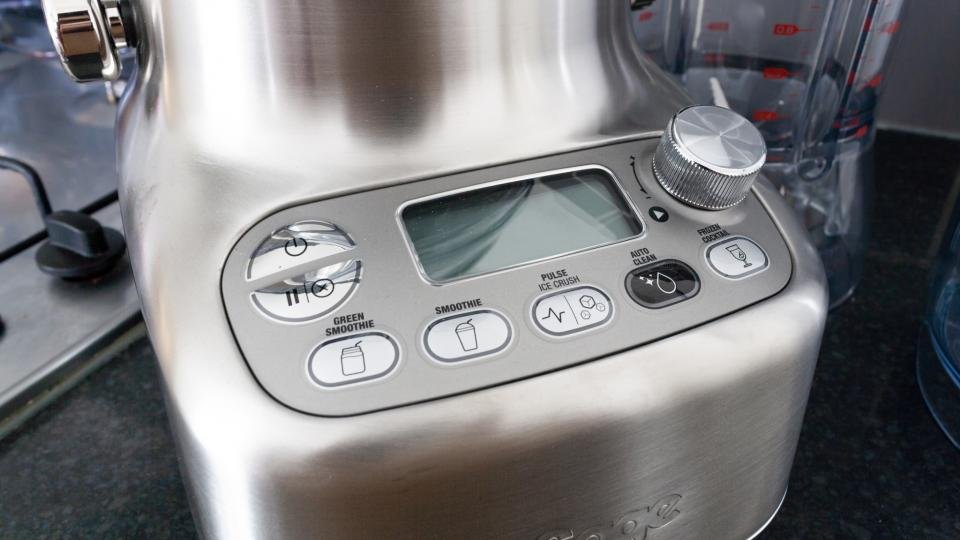 Both the pulp bucket and blender jug are made from thick plastic and slot into their respective areas with ease. I noticed no juice or rogue fruit pulp outside the machine during or after juicing and there’s that handy silicone stopper to plug up the chute after you’ve finished juicing.

The Bluicer’s performance is exemplary. Its extra-wide chute meant I could push through medium-sized apples and oranges whole and only needed to cut larger fruit, such as grapefruits, in half. No matter the size or density of the ingredients I put through the machine, it made easy work of them, often transforming whole fruit and veg to juice in less than five seconds. With two grapefruits and two apples, I was able to make around 700ml of juice in well under a minute.

Juice came out looking vibrant and there was absolutely no separation of ingredients. I did see some foam on the top – as there often is with high-speed juicers – but this was easy to remove. The discarded pulp was also very dry, which is a good indication that most of the juice was ending up in the jug, rather than the pulp bucket. 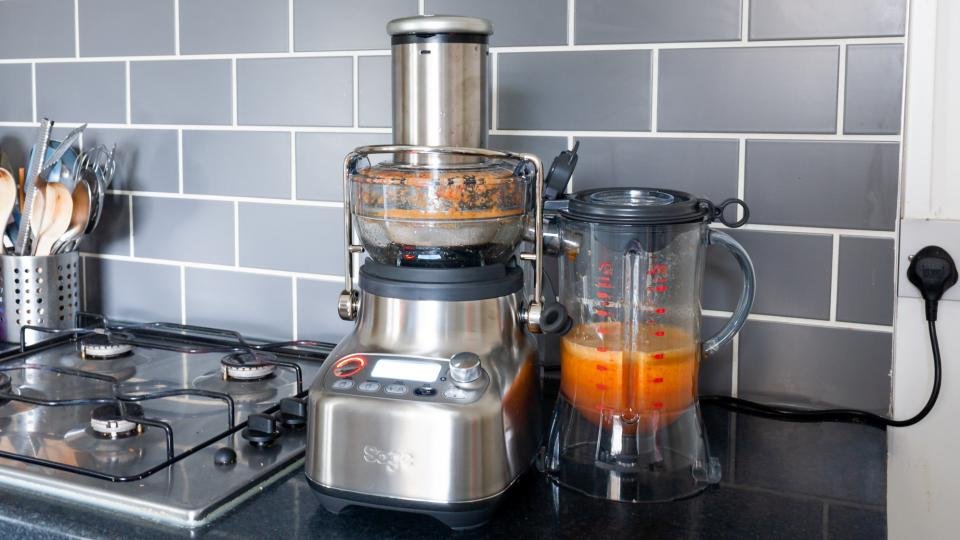 Sage says the Bluicer uses “cold-spin” technology to prevent the blades, and in turn the juice, from heating up during juicing. This is something centrifugal juicers can suffer from due to the high speed of the blades. It’s difficult to tell exactly how effective this is but the juices I produced certainly didn’t taste warm.

Blending was a doddle, too. Simply replace the juicing attachment with the blender jug, secure it in place with the metal arm and you’re good to go. The blender made easy work of vegetables like broccoli, carrots and kale and, while I did have to chop them, it was only into thirds or quarters.

I also used the Vac Q during testing, which Sage claims make smoothies, sauces and milkshakes smoother, brighter and less frothy. When comparing it with a smoothie made without the Vac Q, there was a noticeable difference in texture and I did prefer the Vac Q one. If there was any colour difference between them, though, I couldn’t really tell.

More impressively, the Bluicer is surprisingly quiet. I was expecting an almighty roar as my fruit was blitzed into dust by the high-speed blades, but it was anything but ear piercing considering the force it exerts. In blender mode, the machine was a lot louder though not significantly more than rival machines.

After all the blending and juicing is done, you’ll need to clean the machine, which is surprisingly easy. If you have a dishwasher, all you need to do is give each part a rinse and then stick it on a normal cycle. It does take a little longer if you’re washing by hand but again, it’s not as fiddly as you might expect 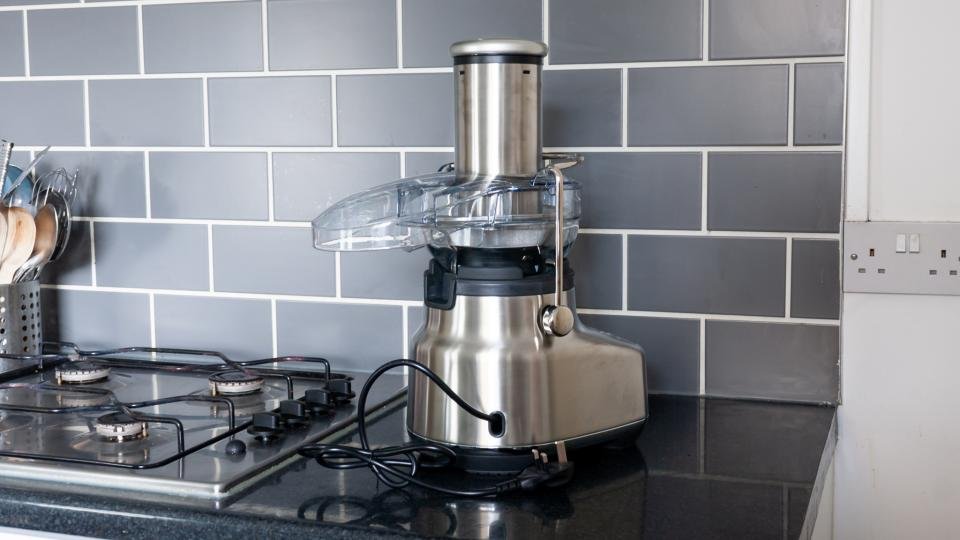 And if you’re feeling lazy you can enlist the help of the blender’s self-clean function. Simply pop a couple of cups of warm, soapy water into the blender jug, tap the self-clean button and the blender spins the blade, cleaning most of the bits around the base of the blade and jug. I did find I needed to finish cleaning the jug by hand, though, so it isn’t 100% effective.

It’s really difficult to say anything bad about the 3X Bluicer Pro. The quality of the juice produced was outstanding and the amount of liquid extracted from the fruit and vegetables was impressive.

If you’re a regular juicer, smoothie maker or just make a lot of drinks and sauces, I’d highly recommend the Bluicer. Yes, it is on the pricey side but when you consider how much you’d pay for a top-end juicer and blender separately, it doesn’t seem quite so outrageous.

Having said that, it’s certainly not something I would recommend if you’re just dipping your toes into the world of juicing or blending. If you’re more concerned with making juice than smoothies, the Sage Nutri Juicer is a sensible alternative that’s also a good bit cheaper.

More in this category: « Sage Barista Pro UK Review: It will reward your efforts Sage Oracle Touch UK Review: There is no going back »