The Dyson 360 Heurist is only the firm’s second robot vacuum and its first new robot in six years.

Given how this sector has been growing in recent years and how competitive it has become, the Heurist is under some pressure to deliver – Dyson has a reputation to uphold.

The question is, has it been worth the wait? Without a doubt, the answer to that question is yes. This is the best robot vacuum Dyson has produced to date and the most powerful robot vacuum I’ve tested, full stop.

Surprisingly, Dyson hasn’t messed around too much with the design of its new robot vacuum. It’s still around the same size and shape as the previous model and it even uses the same digital motor as before.

Instead, the new Dyson 360 Heurist builds on the things that set the Dyson 360 Eye apart from the competition – tank tracks for climbing obstacles, a full-width brush bar for close to the edge cleaning and a 360-degree camera for all-around vision.

With the Heurist, Dyson has not only improved suction by a claimed 20% but it has also introduced an LED lighting ring so the robot can navigate in dark rooms and developed an improved app that gives more control over the robot. All-in-all, it’s a vastly improved product. 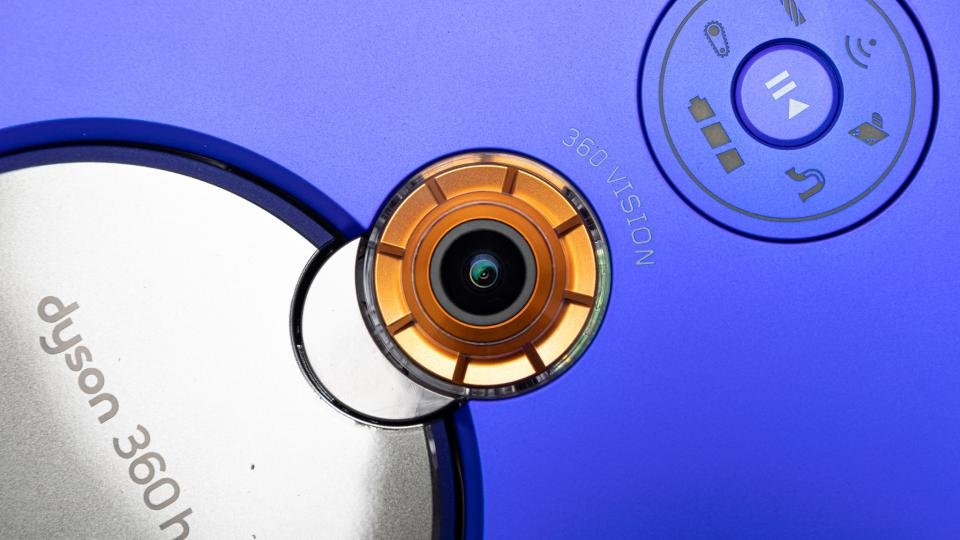 What features does it have?

Like the Dyson 360 Eye, the Dyson 360 Heurist has a far more compact footprint than most robot vacuums but it’s a little on the tall side: it measures 230mm in diameter and 120mm tall. That means it can squeeze into smaller spaces than most rivals but it won’t fit under some low furniture.

On the plus side, it has a brush bar that extends nigh on the full width of the body of the robot – not just between the wheels like many other robot vacuums. This means the Heurist can clean more thoroughly closer to edges and corners. And then there are those small tank tracks instead of wheels, which help it climb door thresholds and prevent it getting stuck.

In typical Dyson style, the Heurist is brightly coloured and finished in attractive matte, soft-touch plastic. Other than that, however, its features are similar to other robot vacuums. It has a small dust collection bin that will need emptying frequently. This is easily accessed by pressing a button on the top panel and pulling the bin outward. 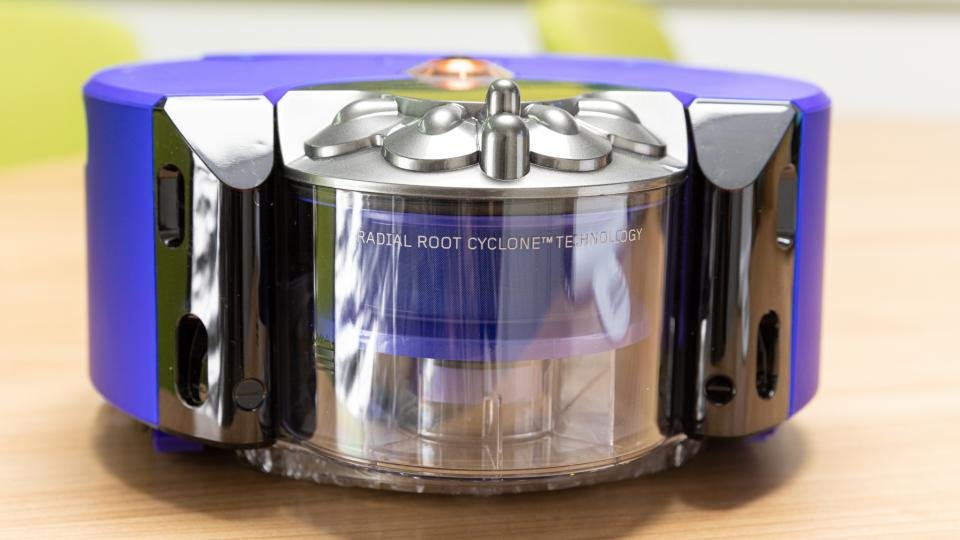 Slightly annoyingly, you’ll have to move the vacuum away from its charging dock to do this but the Heurist makes up for this in how easy the bin is to empty and clean – just pop off the lid and shake it out. It’s also good to see that its two filters are washable rather than throw-away items. Simply remove them, rinse and allow to dry for 24 hours before reinstalling.

Like most robot vacuums, the Heurist uses a variety of sensors to find its way around your home. There’s a 360-degree camera on the top, which it uses for most of its visual navigation. There’s also a pair of long-range time-of-flight (ToF) sensors facing forwards for long-distance object detection, two short-range infrared object sensors, two drop sensors and a pair of wall proximity sensors to help the robot hug the skirting boards as closely as possible.

With the very best robot vacuums you typically get a LIDAR sensor, which uses a spinning laser to map your rooms super quickly in 3D. There isn’t one of those here but the Dyson 360 Heurist is still able to create room maps, which helps it plot a sensible path around your floor space, instead of bumbling around to a random pattern as cheaper robot vacuums tend to do. 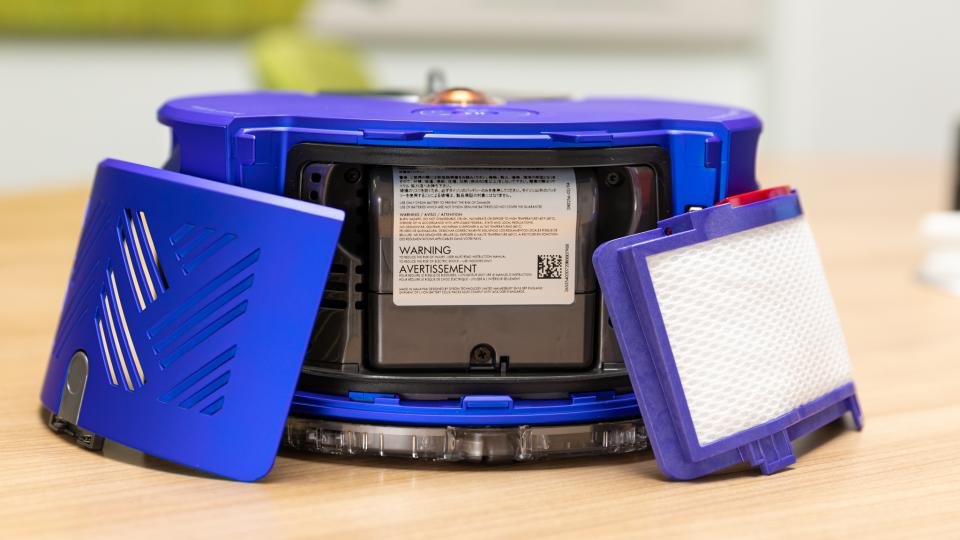 Set up and app

Setup is straightforward but a little long-winded. You first have to plug in the charging base and pop the vacuum on top to charge it. Next, you download the Dyson Link app and connect it to your Wi-Fi so you can control the robot via the screen on your smartphone.

With this done, the app then forces you to create a map before you can get stuck into cleaning, which is where the tedium sets in. Here, the robot trundles around your room without the vacuum or brush bar enabled, scanning for objects and boundaries.

It’s a bit of a long-distance runaround, though, taking just over 25 minutes to complete a scan of my small, 5 x 3m living room. And you have to hang around in case it gets stuck because, at this stage, you can’t draw no-go zones or tell it not to climb low lying obstacles. 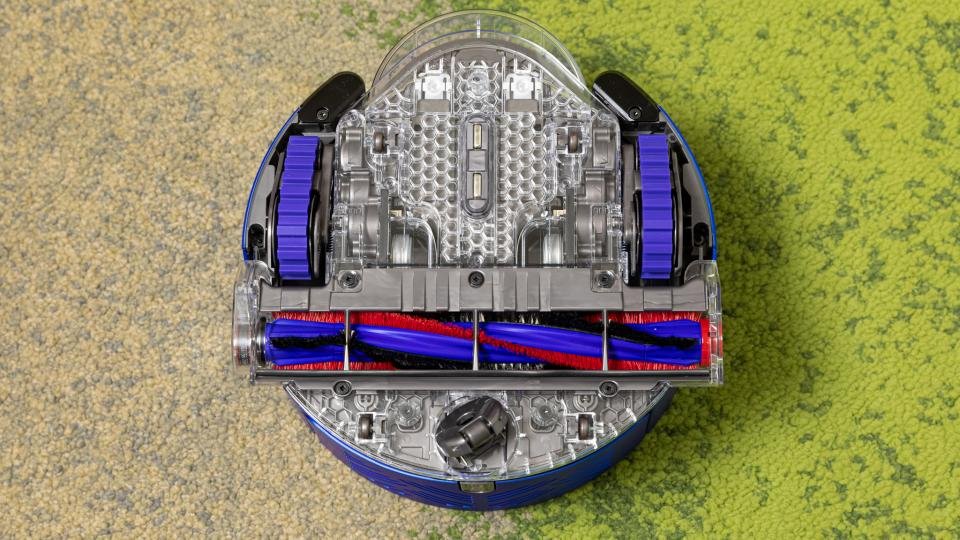 Once the initial scan is completed, the app again forces you to go through another step – zoning. You can’t skip this step, even if your room is small, which I found annoying. However, for those with larger spaces to clean, it gives you the chance to segment your floorplan, and then choose to clean only a selection, potentially speeding the process up.

Setting up zones is about more than targeted cleaning, however. For each cleaning zone you can tailor how the Dyson 360 Heurist behaves, tweaking the power level (low for hard floors, high for carpet, max for deep pile rugs, for example) and whether or not the brush bar is spinning or not. 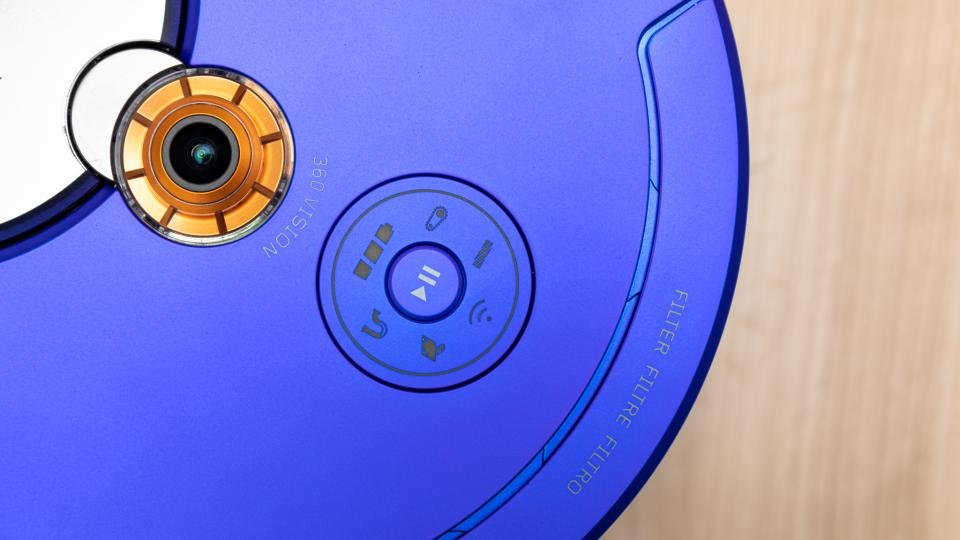 Is it good at finding its way around?

This is the Dyson 360 Heurist’s weakest aspect. Despite having painstakingly mapped its surroundings, I found the Dyson 360 Heurist managed to beach itself on both the base of a speaker stand and the flat-to-the-floor wood legs of my Ikea Poang armchair. The latter is no surprise – I’ve yet to come across a robot vacuum that can cope with this piece of furniture 100% of the time.

Thankfully you can use the Heurist’s Restrictions to prevent this from happening. I set a single, room-sized no-climb area and it worked a treat. The Heurist no longer attempted to mount the speaker stands or those inch-high, flat-to-the-floor chair legs.

You could also use the no-go zone feature to do this, but you might bump up against a usability issue. Indeed, because the maps are fairly featureless, positioning the no-go zones with any kind of precision is difficult and involves a fair amount of trial and error before you get it right. 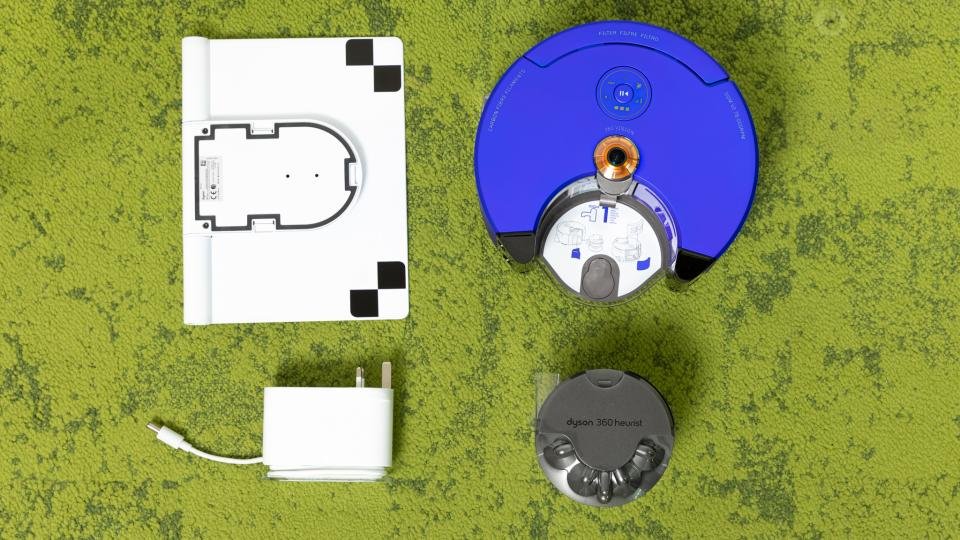 The vacuum was also confused by a glossy black hi-fi unit, banging into it quite hard on a couple of occasions. Again, though, this is a piece of furniture even the most expensive robot vacuums have had problems with in the past and you can prevent it doing so by drawing a no-go zone around the item in question.

Floor coverage, on the other hand, was very impressive, with the Heurist methodically working its way around the room instead of travelling in random patterns. In my rectangular lounge, it worked its way out from the charging base in concentric U-shaped paths until it reached the boundaries of the floor space, then snaked steadily across the floor in straight lines until it had covered the whole floor.

The Dyson 360 Heurist can also find its way around when your lights are dimmed. With the previous Dyson robot you had to have the lights switched on for it to clean; now there’s a ring of eight LED lights surrounding the base of the 360-degree camera which helps it see where it’s going more clearly. Handy if you want to wake up to a spotless floor.

How well does it clean?

It’s much less of a mixed bag when it comes to cleaning power. Using a combination of Dyson’s cyclone technology and its Digital Motor V2, the Dyson 360 Heurist is capable of removing an incredible amount of dirt and dust from carpet.

To give you an idea of how good it is, the Heurist still managed to pick up significant amounts of muck, even after I’d vacuumed the carpet using a Dyson Cyclone V10 running at maximum power. And it continued to do so on the second and third runs. 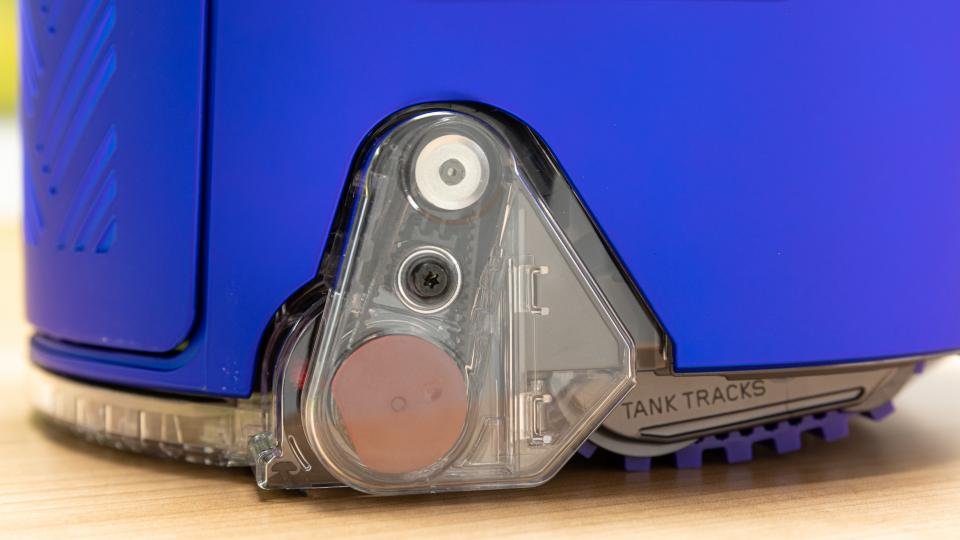 I also carried out four controlled tests, scattering 50g of long grain rice on carpet and then hard floor, then 50g of plain flour on the same surfaces to see how much the Dyson would pick up. With the rice test on carpet, it cleaned most of the 50g but left a thin scattering in its wake; in the hard-floor test, all but two grains of rice were swept away.

It was a similar story with the flour tests, with a thin trace of flour left behind on the carpet but 100% of it sucked away in the hard-floor test. Compared with the Roborock S4 I was testing at the same time, it performed far better, picking up on average 98% of the test material compared with 75%.

Where the Dyson 360 Heurist lags behind its rivals is in its speed of operation. In my testing it took 19mins to complete a clean of my room where the S4 took 11mins. You might argue that doesn’t matter so much when the job it does is so thorough. However, it does mean that, if you need to move it between multiple rooms, for a whole house or flat clean it’s going to take that bit longer.

THe only niggly problem is, this is a minor complaint because the Dyson 360 Heurist is otherwise a truly impressive product. Its suction and cleaning power rivals that of a regular cordless vacuum, yet it can power its way across the floor completely unaided.

The addition of mapping, no-go and no-climb zones in this version are a boon, too, help prevent the vacuum getting stuck unnecessarily and the zoning capabilities keep cleaning times to a minimum if you’re pushed for time.

This article contain Amazon UK affiliate links, which means we may earn a small commission (at no extra cost to you) if a reader clicks through and makes a purchase. Prices may vary after publication, please follow links for current prices.