A terrific printer for amateur photographers, as they would decribe this as the ideal printer for their requirements.

If you’re looking for an affordable inkjet printer that can produce great-quality photos right up to A3 sizes, then this could be just the model you’ve been looking for.

Of course, this only makes sense if the XP-970 is good enough to print photos you want to show off. Can it dish out high-quality output with accurate colours, or should you be saving up for something capable of studio-quality results?

If you really can’t be bothered to read the rest of the review, then here’s a spoiler: the XP-970 really does churn out great quality A3 prints. It also has all the essential features you could ask for at the price, including trays for photo media and a 5760 x 1440dpi six-colour printing system that uses Epson’s Claria Photo HD inks. The main paper trays only hold up to A4 paper, but the rear paper feed takes A3 sheets. In short, you get an affordable printer for more modestly proportioned 6x4 and 8x10 prints, but you can stretch to the larger format for framing or exhibition prints. 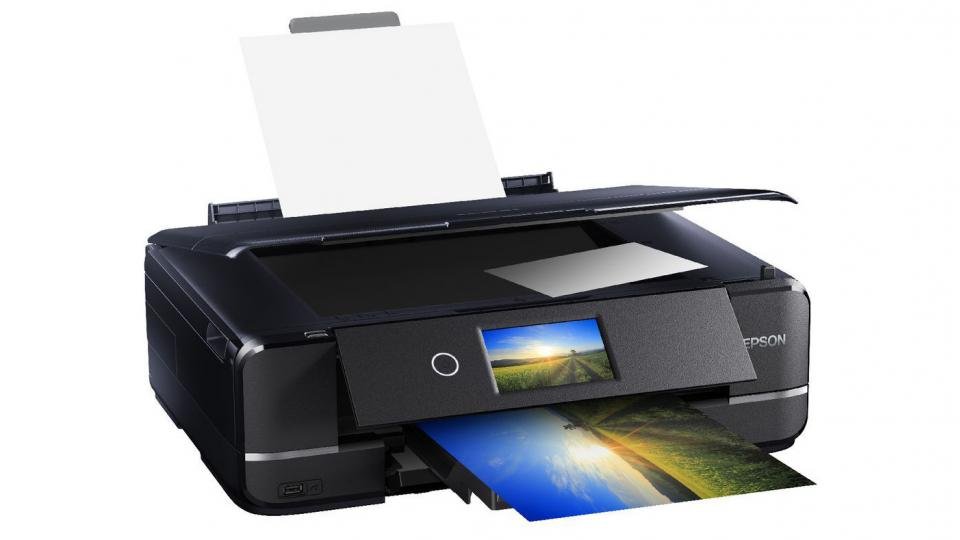 If you just want big, high-quality prints for the home, though, then the XP-970 is by far the best value choice. If you want your prints to look their absolute best – and last longer to boot – then that’s reason enough to pay the premium for its pricier rivals.

In terms of design, the XP-970 looks a little like a super-sized version of the superb Expression Photo XP-8600. It is rather large, though, as you might expect from an A3 printer, and measures a considerable 48cm wide.

Physical controls come down to a single power/standby button, which glows and sometimes pulses with a white surround, and the front is dominated by a panel with a big 4.4in central touchscreen, which tilts upwards at an angle when you turn the printer on.

The Epson’s party tricks don’t end there. There’s a weird arrangement of paper input trays at the bottom, with the lowest one sliding out to take up to 100 A4 sheets, while the upper one slots in and out, taking 6x4in and 8x7in photo media. You can actually push the latter back in too far if you’re heavy handed. A flap at the rear covers an additional paper feed which accepts envelope to A3 sizes with a pull-out support, but one sheet at a time – and only when you’re prompted, or you’ll get a grumpy message. And, just when you think we’re done, there’s also an optical media tray that slides out from the bottom before slotting in above the photo media tray. 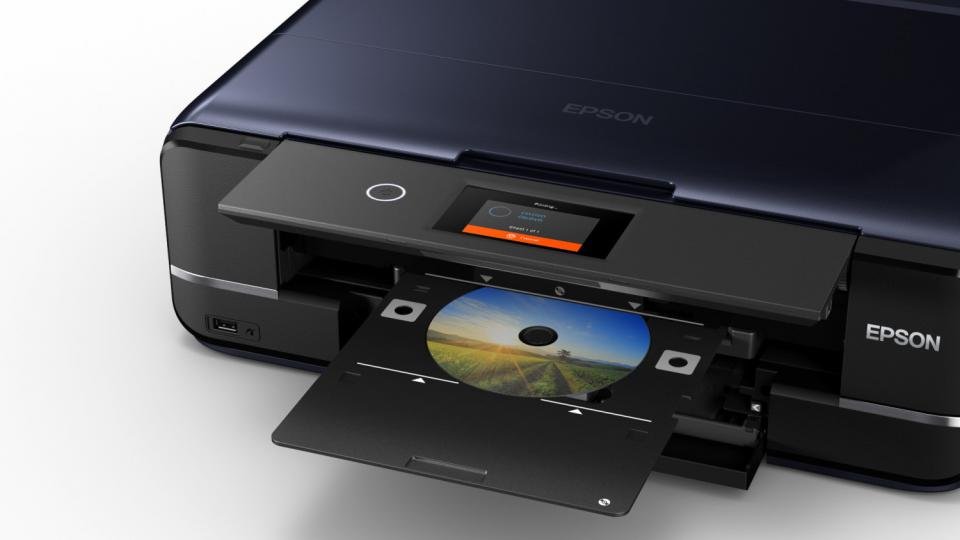 You might be puzzled about where this leaves the output tray. Well, when you start a print job this emerges automatically from its home inside the printer, retreating once again when you turn the printer off. It has a deep, central section for holding photo prints and can support a decent number of A4 printouts, although asking it to hold an A3 page securely might be asking a bit much.

For connectivity, you’ve got a choice of a direct USB connection, Ethernet or 802.11n WiFi, and the printer’s got a sensible, straightforward wireless setup routine where you can select your network and add a password manually or use WPS instead.

Ease of use is generally a strong point. Epson’s driver interface is on the cluttered side, but the options are logically laid out, and the XP-970’s touchscreen interface makes configuration, copying and scanning a breeze. It is a mite annoying that you have to regularly reassure the printer that it’s finished a print job or selected the right sort of paper in the tray – but even that’s better than other printers that give you too little information and no indication as to why a job just failed.

If you’re looking to print direct from a tablet or a smartphone, you can use Epson’s iPrint app. You can select a whole bunch of photos to print then start it running with a tap, and also check your ink supplies, print and scan documents or even capture documents from your smartphone camera. It’s not the most imaginative app around, but it does the job.

One thing the XP-970 isn’t is fast. It churned through our 24-page black text test at a rate of just 9ppm, slower than the 11ppm of its smaller brother, the XP-8600, and most of the A4 printers we’ve seen recently. A five-page colour document went through at just under 5ppm, which is more competitive, but still off the pace set by the HP Envy Photo 7830 and the XP-8600. Printing at draft quality picked up the pace, with mono print speeds rising to 13.3ppm, but this still puts it behind those two printers. Even the budget Expression XP-4100 performed better.

And while this isn’t an office printer, documents don’t look all that great. The XP-970 can go a little heavy with the black ink, giving you a thicker and less crisp rendition of text, and it arguably looks better in draft mode, where it’s not slapping so much on the page.

Still, the bit we care about here is photo printing, and this is where the XP-970 shines. 10x8in prints emerged in 96 seconds, but the prints were worth the wait, with lifelike colours, excellent tonal range, deep shadows and vibrant greens and reds. 6x4in prints took 10 seconds less to arrive, but could have come straight from a photo lab, while A3 prints took a little longer at 2mins 20secs for a print. 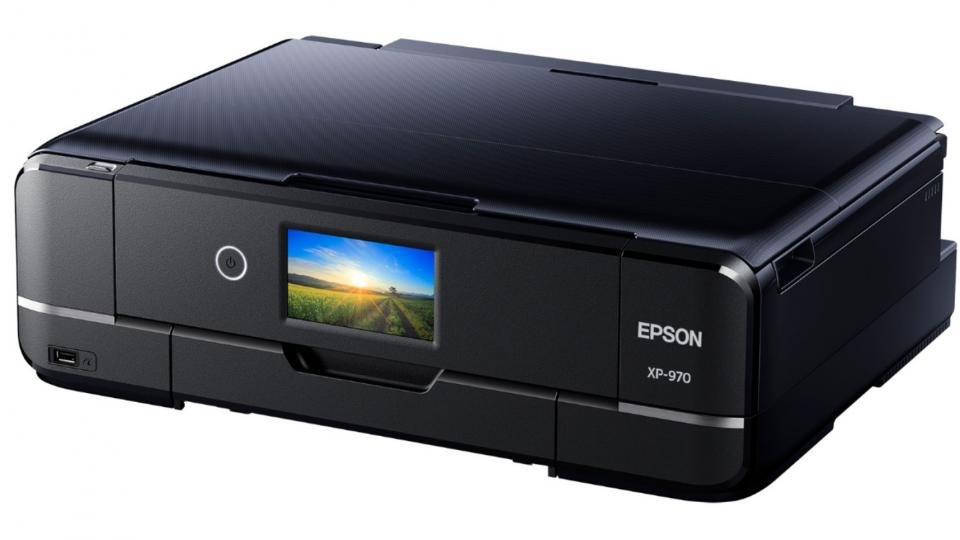 It’s a great photo printer by consumer printer standards. The resolution of the prints makes it near-impossible to see any dots or dithering patterns, and it’s almost as hard to fault the rendering of colours. Bright tones look bright without looking over-saturated, while less vibrant tones can still look rich and not see muted. Print out your finest shots and you won’t be disappointed. You’d have to spend twice as much to get anything significantly better. In fact, it’s arguably only worth doing so if you want the longer lifespan and richer colours you’ll get with professional pigment-based inks; bar the black, the Claria HD inks are dye-based.

The XP-970 will also handle scan and copying duties, and it’s reasonably quick at both, with black and white copies taking under 20 seconds, colour copies taking 23 seconds and A4 colour scans taking just 17 seconds to appear. The 1,200 x 4,800 dpi engine means that there’s plenty of detail captured, though colour accuracy isn’t quite as good with a barely noticeable pink cast on some scanned and copied pages from a magazine.

This isn’t a major issue by any means, but one thing we did notice during testing is that the XP-970 can be tetchy. On a couple of occasions, it refused to run a job and then shut down, while putting a sheet in the rear paper feed before it asked you could also cause a shutdown and restart. It’s possible there was a problem with our test sample or our setup, but most printers rattle through our tests without any concerns.

Running costs are neither cheap nor astronomical, with black-and-white prints coming in at 3p per A4 page and colour prints reaching 11p per A4 page. Obviously, A3 prints will be more expensive, so don’t go crazy when you’re printing at that size.

This isn’t a fast, nor particularly versatile printer, but it is a solid all-rounder that produces excellent photo output both at A3 and A4. If you plan to print a lot in the larger format you might want something with an easier and more reliable A3 feed, but it’s always great to have the option – and especially in a sub-£200 printer such as this. Well-heeled enthusiasts and budding semi-pros should spend more, but the Epson Expression Photo XP-970 is a brilliant photo printer for the amateur photographer.