In 2020 Freeview Play is very popular, coming pre-installed on TVs from LG, Panasonic, Philips and Toshiba, amongst others, and on affordable set-top-boxes from Humax, Panasonic and Manhattan. Back in 2018, though, things weren’t so great for Freeview Play.

The service was new and struggling to match BT’s YouView on many features, and many of the set-top-boxes carried price tags that they struggled to justify.

And that explains why we loved Netgem’s Netbox HD, which gave you all the features of Freeview Play, bar recording, for a more reasonable £70. The Netbox 4K is effectively the 4K-capable version, giving you HD broadcasts and 4K streaming along with recording capabilities, though there’s no storage in the unit itself. It’s obviously more expensive than the Netbox HD too, with an asking price of £149, but is it worth the extra cash?

In case you’re not really sure what Freeview Play is all about, it’s basically the next generation of Freeview HD services, combining HD broadcasts with catch-up TV and streaming services in a single user interface. Along with this came what used to be Freeview Play’s ace in the hole: the ability to scroll backwards through the TV guide and watch programmes that had already been shown up to seven days prior. Instead of starting up, say, the BBC iPlayer app and searching for the programme there, you just picked it out from the Freeview Play guide and waited until it found the stream.

The Netgem Netbox 4K gives you all this wrapped inside Netgem’s own UI, which aims to give you a more personalised entertainment experience enhanced by an accompanying app. What’s more, the 4K model also has recording features, though these come with a couple of caveats. Firstly, there’s only one tuner. Secondly, there’s no onboard storage; you have to plug in a USB stick or hard drive to cover storage and playback. Netgem states that it supports external HDDs but hasn’t said if there’s an upper limit. The only storage devices I had on hand were an 128GB memory stick, which worked fine, and a 2TB HDD which did not.

The Netbox 4K is a compact square unit. Measuring around 130mm on each side and standing just 40mm high, it’s actually a little smaller than its HD sibling, and the rounded corners give it a nicer, less angular look. There’s not much to it, otherwise, with just a logo on the top and a slim LED indicator bar at the front, which glows blue when the box is on and red when it’s in standby. 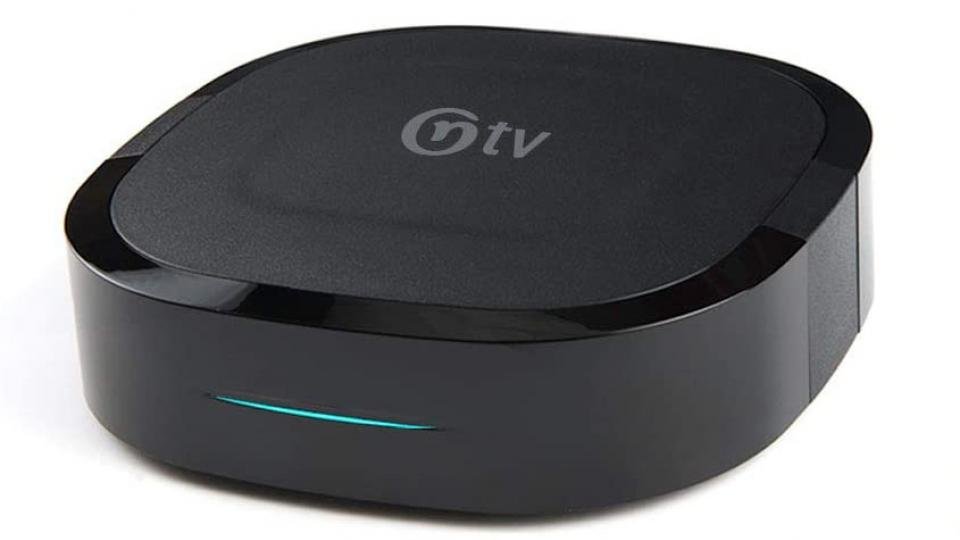 The inputs and outputs are around the back, with an RF aerial in, USB 3.0 and 100Mbit Ethernet connections, the power socket and HDMI and S/PFDIF digital audio outputs. 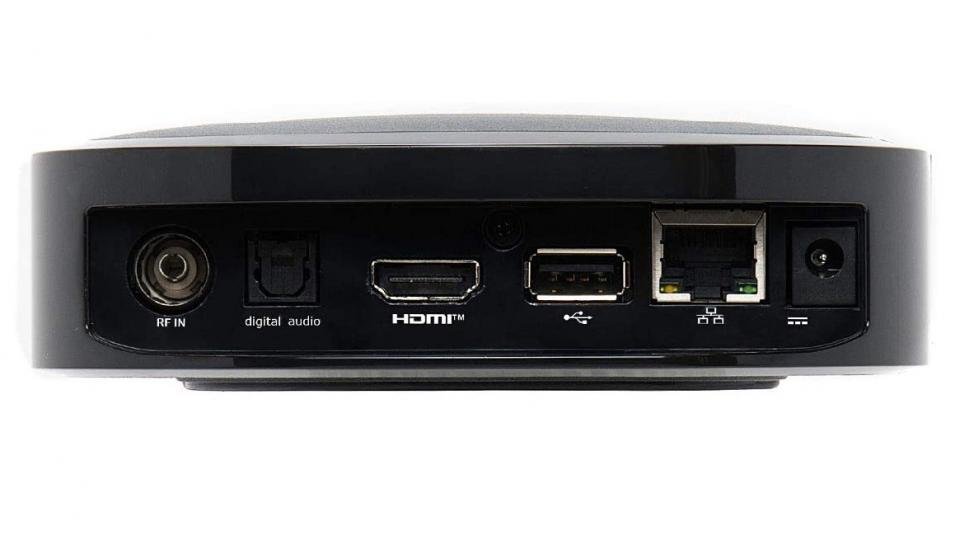 Netgem supplies the box with aerial and HDMI cables, a wall-wart power supply and a remote control. The latter is one of the worst points about this unit, with a more complex and less intuitive layout than the one that came with the Netbox HD, slightly unresponsive buttons and a particularly fiddly cursor pad. If I was planning to use the Netbox 4K every day, I’d be looking to replace this with a compatible universal remote. 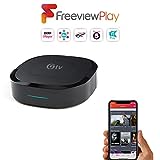 All-New NetBox 4K: All your TV in one place with Freeview Play and Streaming Apps in Ultra HD, includes netgem.tv with Mobile TV App

One thing Netgem excels in is its setup process, which takes you quietly and efficiently through connecting to a wired or wireless network and entering a PIN code for parental controls. And while you’re doing that, it’s already trying to find and organise your channels in the background, sparing you the usual boring channel scan. Credit, too, for making smartphone pairing part of the setup routine, so that the accompanying app’s all ready to use by the time you’re watching telly. 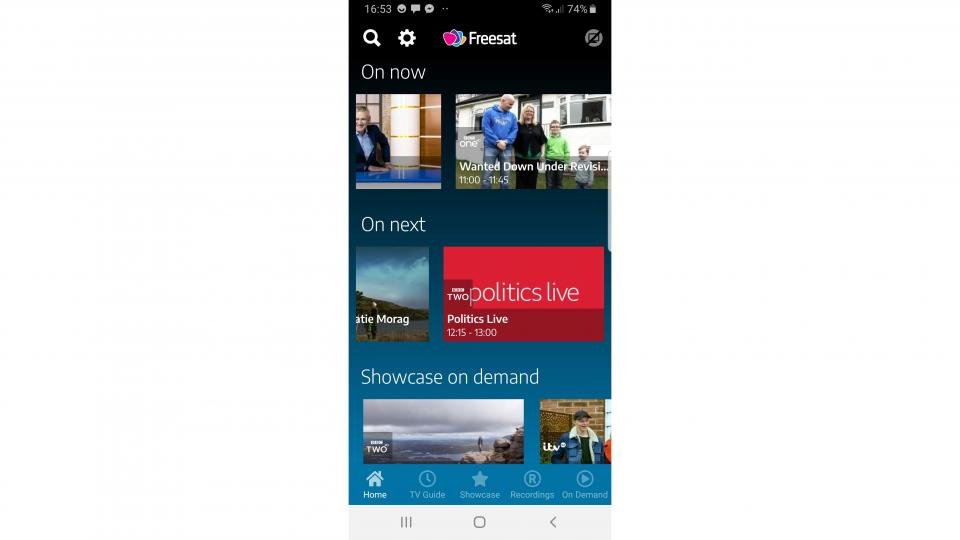 Sadly, something seems to have gone awry with the rest of the UI. This is a totally subjective issue, but I like to have the TV Guide front and centre and other services available at a button press, whereas Netgem has gone for a slightly weirder presentation. Different programmes and movies from a whole range of broadcast, catch-up and streaming sources are all brought together in one screen, the idea being that it will highlight the TV you’re going to like best straight to you. But I’m not sure it works. In fact, I think it gets in the way. 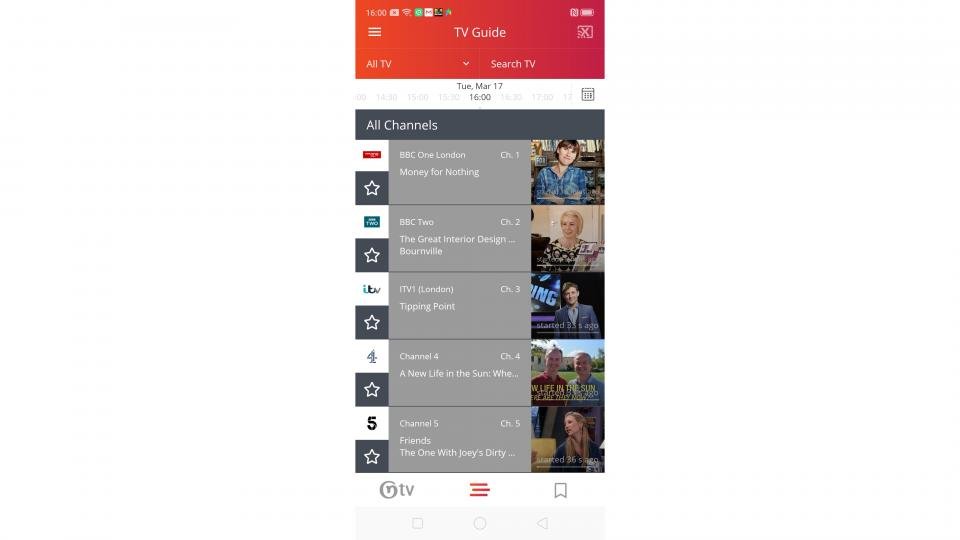 For instance, with no Netflix available on the Netbox 4K, your main sources of 4K content are going to be Amazon Prime Video and YouTube. Yet, where many rivals put the core apps just a click or two away, Netgem’s UI puts them on the Netgem.TV page underneath its selection of the content and genres it thinks you’re going to like. Apparently, this aids discoverability, as you get a whole bunch of programmes and movies tailored to you when you first open the page.

And, frankly, I’d rather do my discovering with Amazon’s UI than Netgem’s, even if this means having to hunt through several apps. As the box has a universal search feature, this wouldn’t be necessary, anyway.

It feels a bit like this with the broadcast TV services as well. There is a traditional seven-day scrolling EPG, but it’s hard to find within Netgem’s UI. Instead, you’re better off pressing the guide button on the remote.

After a couple of days I got used to the Netbox 4K’s idiosyncrasies, and using the smartphone app can help because, while it still goes heavy on recommendations, it’s easier to get to the regular TV guide. You can set reminders and cast programmes to your TV straight from the app, which also means you can spend less time using the remote.

The UI issues are a bit of a shame, because the performance of the 4K box is fantastic. HD programmes look great, with impressive detail and nice, natural colours. 4K content on Amazon Prime Video is even better, revealing all the textures in the gritty, industrial sci-fi of The Expanse, and doing a spectacular job of resolving action scenes in The Avengers: Endgame.

4K Trailers for No Time to Die, Doom Eternal and the Dwayne ‘The Rock’ Johnson vehicle Jungle Cruise also look amazing and, going from one source to another, there’s no visible difference between the presentation from the Netbox and how the same content looks streaming to the native apps on my Samsung TV.

HDR10 is supported, as is Dolby Atmos, though there’s no support for Dolby Vision. Still, if you have a Dolby Vision-capable TV, you’ve probably got your streaming needs covered by the built-in apps.

Our biggest issue, as with so many streaming/broadcast devices, is app support. We get Amazon Prime Video, YouTube and Rakuten TV along with all the major catch-up services, but no Netflix or Now TV. If you’re selling a box as an all-in-one TV solution, Netflix is simply a must have.

All-New NetBox 4K: All your TV in one place with Freeview Play and Streaming Apps in Ultra HD, includes netgem.tv with Mobile TV App

To be fair to the Netbox 4K, most of its rivals suffer from similar problems: the Manhattan T3 and Manhattan T3-R are superb streaming and TV units, but they can’t boast support for Netflix, Now TV or Amazon Prime. However, for me the T3 and T3-R pull ahead because their more conventional UIs work better for everyday use, and because the pricing – around £80 for the set-top-box and £170 for the recorder – makes more sense.

It’s hard to fault the Netbox 4K on performance, but it makes you wonder whether you’d be better off with a separate HD recorder and a 4K streaming stick with wider app support.

More in this category: « August Smart Lock Pro UK Review: Why did I wait so long to buy one iSmartgate Pro Garage Door Opener UK Review: Just the Job »