The iO's new design, magnetic drive and Bluetooth tracking app have all been designed to improve the way you brush for good.

This amazing deal on Oral-B's latest smart toothbrush won't be around forever though, so snap it up while you can. It is now £250 from Amazon.

Chances are if you don’t already own an electric toothbrush then you’ll at least know what they are and do. The brush bristles either rotate or vibrate when switched on, essentially doing all the hard work for you as you move the brush around your mouth.

Oral-B's newest toothbrush, the Oral-B iO, takes electric brushing a little bit further, though. The company has spent six years finalising the iO and in that time it has managed to combine a brush that not only vibrates and rotates, but lets you customise and track your brushing over days, weeks, months or even years, for a more personalised experience.

On the surface, the Oral-B iO doesn’t look a whole lot different from any other electric toothbrush you might have come across in the past. It’s rechargeable and has a rotating brush head that can be replaced. The iO, however, has seven different cleaning modes, a pressure sensor and an app that connects via Bluetooth, allowing you to track your progress. It also combines the traditional rotation with a new feature, the magnetic iO drive system, which transfers the motor energy directly to the bristle tips. This is, in theory, meant to improve how well the head brushes your teeth when compared to the Genius X, Oral-B's previous electric toothbrush. 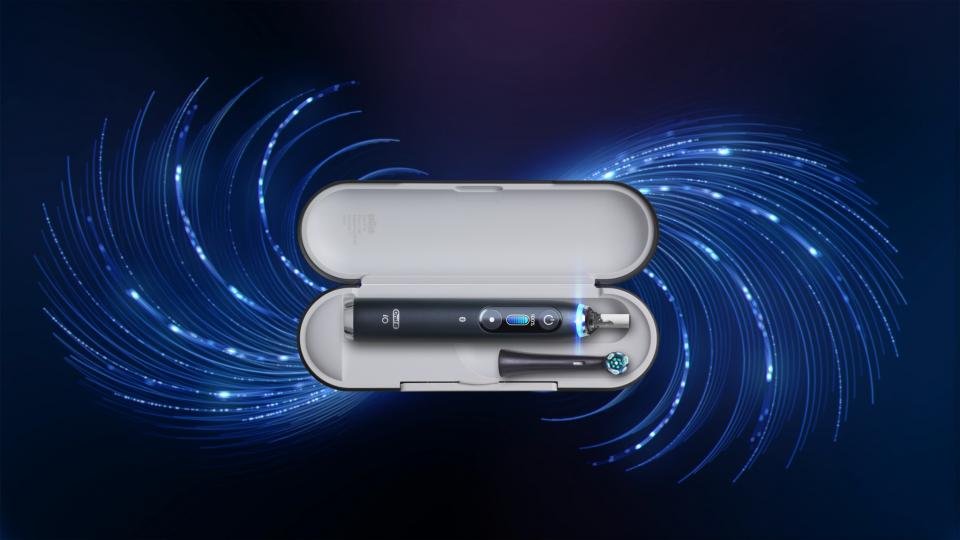 Progress is tracked using three sensors in the main body of the brush, which have been trained via an algorithm to track over 1,000 brushing behaviours. This essentially means the toothbrush knows how you brush your teeth and teaches you to adapt your brushing habits. You can track how you’re brushing in real-time and look back over your progress with the iO’s dedicated app.

The brush is available in three colours – White, Black Onyx and Rose Quartz – and the design is similar to many of Oral-B’s older brushes, with the small, removable rounded brush head sitting atop the main body. However, while the oscillating bristles and brush head design are identical to the Genius X, everything else has been changed. The body has been slimmed down and feels lighter in the hand. Charging has also been improved: the charging base is now magnetic, which not only looks sleeker than previous models but means it will achieve a full charge in under three hours. We're also big fans of the iO's sleek case, which charges your toothbrush on the go, so you don't need to worry about bringing along any pesky cables while travelling.

Perhaps the most noticeable design change is the iO’s OLED screen, which allows you to quickly and easily scroll through the brush’s numerous features. When switched on, the brush greets you with a hello, good morning or good evening, depending on when you’re using it. You’ll then be prompted to choose one of the seven cleaning functions which include daily clean, sensitive, super sensitive, intense, tongue clean, whiten and gum care.

Other features that can be controlled via the screen are the Bluetooth, which enables you to connect to the app, and ring light colour personalisation. The ring light is designed to change colour depending on the amount of pressure you’re exerting. If you’re brushing too softly, the ring light colour will stay the same, brush just right and the light goes green, brush too hard and you’ll see a red light.

The iO brush smartphone app can be used in real-time while your brush your teeth. When you start, you’ll see a sort of 3D mouth map, with rows of dots to symbolise the insides, outside and flat areas of your teeth. Once you’ve successfully covered each surface area, the dots will fade and the different parts of the 3D image turn white, indicating that you’ve successfully cleaned that area. 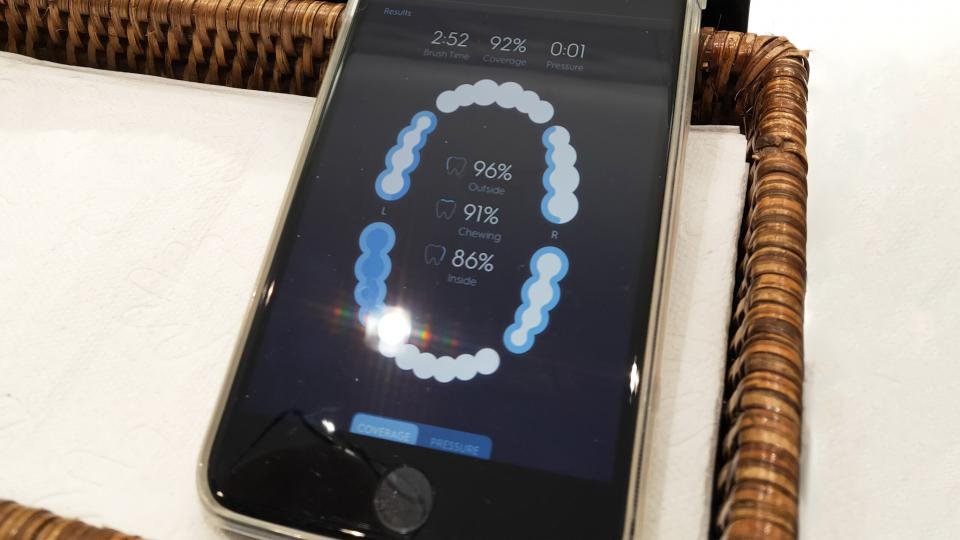 While all this is going on, a timer displays how long you’ve been brushing for, buzzing every thirty seconds over a two minute period to let you know when you should be moving onto another area of your mouth. At the end of brushing, the brush will display emoji-based feedback depending on how well you’ve brushed and for how long.

On the app side of things, you’ll get a score that is based on how successfully you’ve covered each area of your mouth and how hard you were brushing throughout. One thing you will notice when first using the brush and the app simultaneously is that it’s actually quite difficult to cover 100% of your mouth in the two minutes typically recommended by dentists. As you continue to use the app and the brush though, it’s expected that you’ll be able to achieve a perfect brushing score in less time.

Having the option to select your preferred mode is useful, especially for those of us with sensitive teeth or gums. Some electric toothbrushes can feel quite aggressive in the mouth, so being able to change how much force is exerted on days when your gums are feeling a little tender is ideal. Though, I also found this customisation to be beneficial on days when you’ve overindulged in less tooth-friendly foods and need a more thorough clean too. 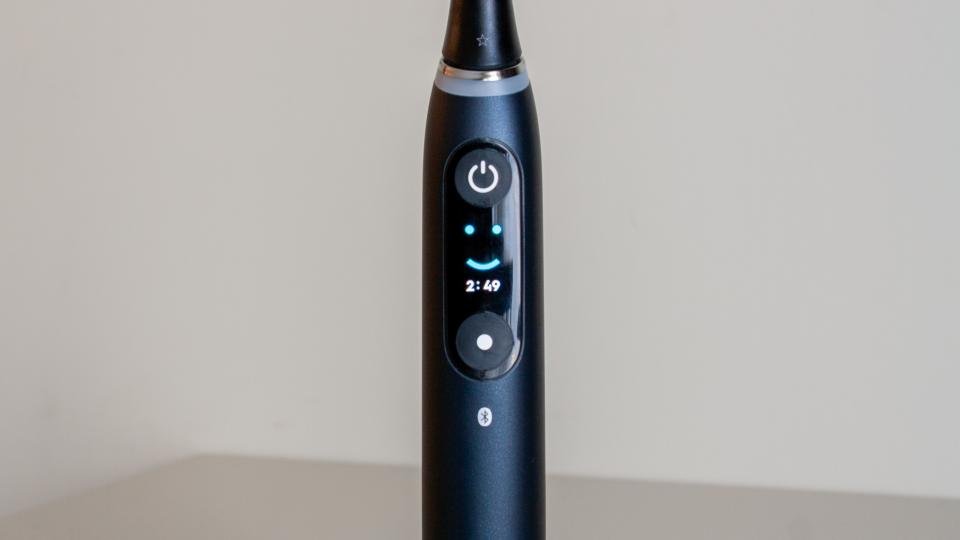 When using the intense brushing modes, the oscillation sweep is wider and the speed of the bristles across the tooth is faster. I found that there was a clear difference between the sensitive and intense modes, as the sensitive setting did feel far more gentle, especially around the gum area. The daily clean was more of what you’d expect from an electric toothbrush – vigorous but not overpowering. However, after a full day of eating and drinking, I found the tongue brush mode wasn’t quite as thorough as I’d like, though that’s more of a personal preference.

The coverage detection on the app isn't foolproof, there were times when I had to go back over areas of my mouth because it hadn't recognised that I'd brushed. However, these moments were rare and for the most part, it was impressively accurate, reacting quickly to me moving the brush around my mouth, checking off each part as I did.

Having used several other Oral-B electric toothbrushes in the past, I can safely say that my teeth have never felt cleaner than when using the Oral-B iO. Whether this is because of the improved brush head design, the magnetic drive system, the tracking app or a combination of all of the above, I was genuinely impressed with its performance.

The lure of the Oral-B iO is definitely its on-screen features and app. It's relatively intuitive and fun to use and the speedy charging time is a big bonus. Moreover, being able to switch between brushing modes is useful for customising my daily routine and the iO does appear to clean my teeth far better than previous electric toothbrushes I've used. If you have no idea whether you’re brushing your teeth right and are interested in improving said skill, this could be the at-home solution you've been looking for.

More in this category: « Gaggia Naviglio UK Review: The bean-to-cup machine to buy
back to top